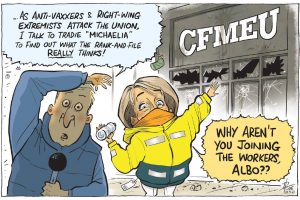 Just a brief note to let you know that I wrote something for Overland titled ‘Constructing a narrative: the CFMEU protest and the far right’ (September 23, 2021). I may add a little more detail here when I can, but also of interest are:

*September 24, and a few more articles of interest:

• Nazis prey on the disenfranchised and angry. So does News Corporation, Dave Milner The Shot (September 24)
• Workers’ rights or the far right: who was behind Melbourne’s pandemic protests?, Michael McGowan, The Guardian