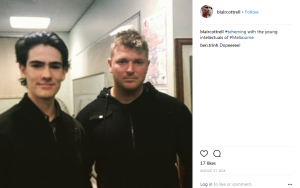 Above : A teenage Jacob Hersant being groomed by former ‘United Patriots Front’ (2015–2017) lvl boss and sometime Sky News commentator Blair Cottrell, August 2016. (Cottrell goes to Frankston Magistrates’ Court on December 6 but, like Over 9,000 other nazis, he otherwise keeps busy grooming teens on Telegram.)

Thomas Sewell, The Boy from Balwyn (Who Went To Prison), was back in court again this week, along with his sidekick, Jacob Hersant. Balding wanna-be fuehrer Tommeh! and OpSec geni0use Jakob are accused of leading a smol group of Ordinary Mums & Dads™ in an attack upon some hikers in the Cathedral Range in May. Specifically, these two Very Fine People have been charged with armed robbery, affray, violent disorder and several other offences. AAP reported (Alleged neo-Nazi victim feared death, Karen Sweeney, The Canberra Times, October 28, 2021):

Prosecutor Danielle Guesdon earlier failed in a bid to have Sewell and Hersant’s supporters removed from court over “coded hate speech” posted in a chat by a man going by the name Jimeone Roberts, who also held up a “Free Tom Sewell” sign.

Five witnesses gave evidence against Sewell and Hersant on Thursday, all choosing to keep their face masks on throughout. Ms Guesdon said they had concerns about their safety.

Magistrate Peter Reardon knocked back the request but put rule breakers on notice.

Suspected supporters including Neil Erikson, Mr Roberts and a man going by “based51” turned on their cameras in response.

After the magistrate’s warning two images were flashed on screen – a gorilla doing a Nazi salute and a topless woman.

The hearing is continuing. Sewell is in custody while Hersant is on bail.

• Erikson is a veteran neo-Nazi serial pest whose utter contempt for the (((courts))) has been remarked upon since 2014 (when he was convicted of stalking a rabbi), but who was also exonerated by The Australian’s Chip Le Grand in December 2017. He’s currently appealing a prison sentence for disrupting a church service. 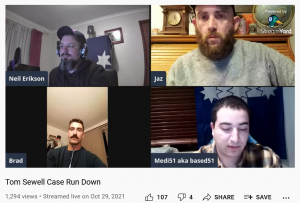 • ‘based51’ is a reference to the 51 Muslims slaughtered by the National Socialist Network‘s hero in Christchurch and a handle used by former University of Melbourne Liberal Party student activist — and licensed gun owner — Stefan Eracleous (AKA ‘Australian Meditations’ AKA ‘Zorba Dundee’ AKA ‘zorba dundee 51’). 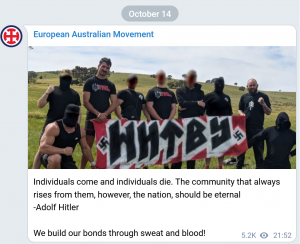 • While reference is made to both the ‘European Australian Movement’ (EAM) and ‘National Socialist Network’ (NSN) — and to Hersant and Sewell as being the fuehrer of one or the other — the two organisations should be regarded as functionally synonymous, Hersant as being Sewell’s sidekick (whose brief but disastrous leadership of the groupuscule was bestowed on him by Sewell following his incarceration in June) and leadership of the budding génocidaires as having been assumed by former ‘Proud Boy’ Jarrad Searby, Brad Ingram and whoever else wanted to stick around after the August exposé.
• The nazi Boy Scouts apparently believed that the hikers they encountered were anTEEfa. This line of thought has been vigorously pursued by NSN member David Hiscox on his blog XYZ.
• It’s unclear if the mobile phones that were allegedly stolen from the hikers were ever recovered.
• Six others have been identified as ‘persons of interest’ by police, investigations are ongoing, but ‘a number of seized electronic devices … were yet to be analysed because police had not yet been able to access them’.
• That members of Sewell’s fan club employed (other) electronic devices to zoombomb court proceedings was predictable, but will not affect the outcome.
• Having already lost their first bunker in Cheltenham and then its replacement in Rowville, the nazis have also recently been evicted from ‘Racism HQ’ in Eildon Parade.
• Sewell and The Lads were once employed by Sky News Australia’s Lauren ‘The Great Replacement’ Southern. However, while she’s since gone on to fame, fortune and further corporate sponsorship, unlike Lauren, poor old Tommeh! has struggled to find a lucrative-enough fan base, and his legal defence is being partly funded by the sale of a card game, but largely through donations from his fellow nazis.

From Collett to Sewell And Back Again

Sewell’s name popped up earlier in October when The Times did some digging into Mark Collett and his fascist groupuscule ‘Patriotic Alternative’ (see : At the gym, in the hills, the far-right fight clubs where men train to make Britain white, Dominic Kennedy, October 9 2021: ‘Experts fear extremists are forging a force primed for street violence’). According to anti-fascist research group Red Flare:

Collett was filmed training martial arts with members of the now-proscribed neo-Nazi group National Action (NA). The Times investigation also reveals that PA risks being proscribed over comments made by guests on its livestreams. Australian neo-Nazi Thomas Sewell called for the mass rape of police officers on a PA affiliated livestream, since deleted over fears that it had broken the law.

You can learn more about Red Flare’s investigations into Collett and PA by way of the 12 Rules For What podcast: ‘We discuss the the weird history of their leader Mark Collett, how PA dance around their nasty politics, the shift from civic to ethno nationalism on the UK far right, and much more!’ Just as Sewell has been celebrated in fascist media in the UK, Collett has also starred on various far-right media platforms in Australia, appearing at the 2021 virtual conference of Hiscox’s XYZ blog and being interviewed by Timmeh! Wilms of The Unhinged (AKA ‘The Unshackled’) blog.

After having spent several years as a semi-professional Islamophobe, serial pest Avi Yemini is now making a name for himself as one of several pied pipers to local plague rats. Along with smashing windows, kicking dogs, dancing on bridges, pissing on shrines and spreading the virus, COVIDIOTs like Yeminem and his bodyguard Daniel Jones have been busy picking fights, most recently outside a Melbourne restaurant. If not an especially bright scholar, Jones is certainly a large gentlemen, and the former Goth has now been employed for years by Yemini to protecc him as the diminutive troll goes about town, acting like a dick, and thereby generating content for his Canadian employer’s enormous online audience. 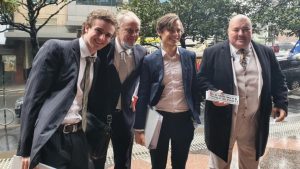 In the last month, YouTube personality Simeon Boikov has declared WAR! on the CFMEU. You may remember Boikov from such ABC reportage as Putin’s patriots (Sean Nicholls, Jeanavive McGregor, Mary Fallon and Alex Palmer, 4 Corners, February 15, 2021) or
The strange case of Putin’s self-declared fifth column in Australia (Kyle Wilson, Inside Story, August 12, 2020) or even Australian Cossack may have flown to Ukraine to support pro-Russian rebels (9 News, July 30, 2014). Like Avi, Simeon is sponsored by YouTube, where he publishes propaganda under the title of ‘The Aussie Cossack’.

Boikov was awfully excited by the smashing of the CFMEU office in Melbourne, and declared that he looks forward to similar union-smashing in Sydney. He’s also published an interview with a man who claims to have special insight into outlaw motorcycle clubs in Australia, and their apparent willingness to ally themselves with Boikov in his manly struggle to dismantle building unions. Boikov The Businessman also owns and operates a labour hire company called ‘True Blue’ (ABN 31 649 101 020), so fingers crossed his bikie mates are able to open up the industry for little Aussie battlers like Simeon and he will decide who comes into the building industry and the circumstances in which they work. 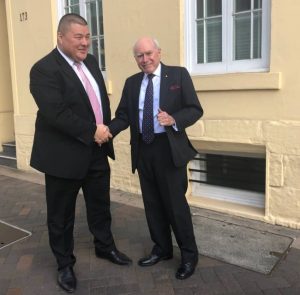 According to the Campaign Against Racism And Fascism:

On November 20 the anti-vax movement will be holding another rally. Those organising the protest are linked up with far-right movements around the world. Their politics are deeply reactionary. They stand against public health measures including the restrictions and vaccines that have saved countless lives. While our hospitals and healthcare workers are being overrun, they celebrate selfish individualism that would see the bodies pile high as the virus rips through the community unabated.

Perhaps as many as 1,000 attended an anti-vaxx rally on October 30 outside state parliament, so it will be interesting to see what happens on November 20. For more details, see the Facebook event page and please note that This is organised as a COVID-19 safe event. All participants are requested to come fully vaccinated and wearing masks.