“That’s not Balwyn calling!” Soup But No Bail for Tom Sewell

TLDR : Charged with numerous offences following an alleged incident at Cathedral Range on May 8, a bail application by neo-Nazi leader Thomas (Tom) Sewell was refused yesterday. He remains in custody, and his next scheduled court date is August 2 — a committal hearing stemming from an earlier incident when it’s alleged Tom assaulted a security guard outside the offices of Channel 9.

• Sewell is variously described as a ‘neo-Nazi’ ‘leader’, a ‘self-confessed’ ‘white supremacist’, ‘the national leader of the European Australian Movement [EAM], and … heavily involved in the National Socialist Movement’. In which context: while there is a rudimentary ‘national socialist’ movement in Australia (one that is linked to its counterparts in other countries), the NSM is a US organisation and Sewell is the leader of the National Socialist Network (NSN). Inre the relationship between the EAM and the NSN, the EAM was ‘officially’ launched at the beginning of 2020, and was intended to function as a ‘front’ group for the NSN: a public-facing, less-obviously neo-Nazi project which would provide a political space for White supremacists not yet prepared to ‘Go Full Nazi’. In other words, the two organisations should be considered as being basically synonymous. As I wrote in June last year:

For a brief period of time after the establishment of its new bunker in Rowville, [The Lads Society] engaged in a discussion about establishing a front group. Thus at the start of 2020 TLS rebranded itself as the ‘European Australian Movement’, and even managed to obtain a website for the projekt … For reasons, EAM was junked in favour of a more straight-forwardly nazi project: the NSN. This is an interesting development insofar as The Lads are no longer pretending not to be what they are: neo-Nazis. This also has the benefit of making it a little more difficult for members of the commentariat to pretend otherwise (though they will of course try). Beyond this, in being more honest about their politics, The Lads have abandoned any real attempt to ‘go mainstream’ while wrapped in the national flag, and the semi-mythical Ordinary Mums & Dads™ have similarly been abandoned in favour of recruiting from among Angry Young Men. The explicit embrace of neo-Nazism also seeks to draw upon the teenyboppers who’ve been radicalised by way of Iron March, Fascist Forge and other, more obscure forums …

TLDR : EAM is NSN is EAM is NSN; Sewell is/was the leader of both but, while incarcerated, responsibility has been handed over to his sidekick, Jacob Hersant, the 22-year-old ‘veteran’ of defunct nazi grouplet ‘Antipodean Resistance’.

• According to Cucchiara’s report, the prosecution claimed that ‘Mr Sewell had links to bikies, being “close friends” with a Finks member’ — which is interesting. In general, there are often informal links between OMCGs and nazi gangs in Australia, but such relationships are typically much more pronounced in Europe (see, for example : Hells Angels in Germany and Portugal) and North America. Thus when Mr Sewell and his comrades in the ‘United Patriots Front’ decided to launch their abortive political party ‘Fortitude’ in Perth, they did so at the ‘headquarters’ of the Aryan Nations, a short-lived branch of the ‘Aryan Nations Sadistic Souls MC’ (Illinois), and there are several individuals in the orbit of defunct groups like the UPF, the ‘Soldiers of Odin’ and the ‘True Blue Crew’ who’ve drifted in to and out of bikie gangs. Certainly, any ongoing association between nazis and bikies is guaranteed to generate interest on the part of law enforcement. See also : ‘Neo-Nazi’ who claims he was discriminated against in Canberra’s jail loses tribunal bid for anonymity, Harry Frost and Michael Inman, ABC, May 26, 2021.

• Supposedly, Sewell and his kameraden believed that the hikers allegedly attacked by them were anTEEfas, but there’s ‘no evidence the six hikers had any connection to Antifa or any other left-wing organisation’. That said, given rampant paranoia about anTEEfas in Sewell’s gang — see, for example, Jarrad ‘Jaz’ Searby stalking an old-age pensioner after he made an unkind comment about ‘Hard Knocks’ on The Facebooks — this reaction is understandable. This paranoia was further reinforced by way of subsequent commentary by Sewell’s kameraden David Hiscox and Matthew Roebuck (XYZ) and Searby’s #BFF Timmeh Wilms (The Unhinged). According to Timmeh! (‘Timmeh!’s News Explosion’, YouTube, May 17, 2021), the subjects of the alleged assault were likely either anTEEfas or, possibly, infiltrators. According to Hiscox and Roebuck, those allegedly assaulted were likely degenerate Communists (in which case, their testimony may be safely disregarded).

• More seriously: The court heard the alleged victims called police but since then some had been too afraid to make a statement to investigators. “We’re in discussions with these two victims but they are adamant that they are too petrified of persecution and not willing to provide sworn statements,” Senior Constable Taylor said. Further: Senior Constable Taylor told the court that since being in custody, Mr Sewell has been heard on prison phone calls urging his members to “investigate the victims to gather evidence”. “Sewell reinforced to those members that they read the witness statements and look for clues, stating, ‘It’s so important for you guys to keep researching and keep investigating,'” Senior Constable Taylor said. If so, this would not be surprising, and it’s certainly possible that, if the complainants were to be publicly identified, they would be the subject of harassment and/or intimidation.

• Finally, while a number of her protectors continue to work in the security industry, at this stage it does seem likely that Sky News Australia’s Lauren ‘The Great Replacement’ Southern will have to wait some time before Mister Sewell is able to once again to place himself at her disposal. 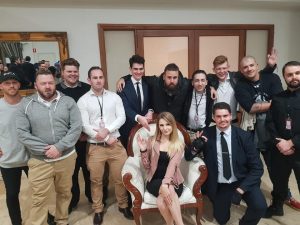