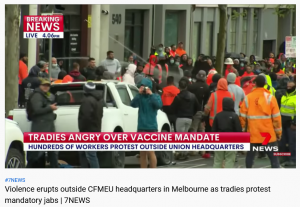 On September 20, the Melbourne office of the Construction, Forestry, Maritime, Mining and Energy Union (CFMEU) was attacked by a group of angry anti-vaxxers and their allies: a motley assortment of malcontents, including union members, fueled by far-right myth-makers on social media. I wrote a little about what happened for Overland (‘Constructing a narrative: the CFMEU protest and the far right’, September 23, 2021), provided links to a few more articles of interest in a blog post and last week responded to a critic of the Overland article in another.

One immediate effect of the protest was an announcement by the Victorian state government of a two-week suspension of all construction work: work resumed on Tuesday, October 5. A longer-term impact was dozens of COVID-19 infections among CFMEU officials, staff and their families.

Work stoppages and infections weren’t the only fallout from the protests of mid-September, however, and not all CFMEU members are happy to dance to the tune being played by Avi Yemini — to put it mildly. According to one group:

The CFMEU is one of Australia’s last fighting unions. This amazing institution is a living memorial to all the workers who made it what it is today.

In September 2021 a group of Alt Right[ists], fascists, white supremacists and Trump lovers attacked our union office, its members and staff. They were supported by a handful of CFMEU members.

Our union will never stand with the Alt Right. They seek to destroy the working class and its institutions and we must never back off from fighting this scourge.

‘CFMEU Forever’ has published a website and Facebook page, is ‘not endorsed by the union’ and ‘would like to identify all members and others who participated in recent attacks on our union or stood side by side with those that did’.

See also : ‘Tyranny’: US rightwingers portray nightmare vision of Australia’s Covid response, Jason Wilson, The Guardian, October 10, 2021 (‘The feedback loop between US conservative media and Australia’s fringe right has intensified as New South Wales and Victoria have struggled with outbreaks’) | Neo-fascists exploit ‘no-vax’ rage, posing dilemma for Italy, Frances D’Emilio, Associated Press, October 14, 2021 (‘Italy is wrestling with how to deal with a neo-fascist party that has violently exploited anger over the government’s anti-COVID restrictions’).

I live in Melbourne, Australia. I like anarchy. I don't like nazis. I enjoy eating pizza and drinking beer. I barrack for the greatest football team on Earth: Collingwood Magpies. The 2023 premiership's a cakewalk for the good old Collingwood.
View all posts by @ndy →
This entry was posted in Anti-fascism, Broken Windows, History, Media, State / Politics, That's Capitalism! and tagged CFMEU, CFMEUForever, COVID-19, unions. Bookmark the permalink.