Above : Cliev’s latest acquisition, Craig Kelly MP, pictured at the weekend anti-vaccination rally in Melbourne alongside his neo-Nazi bodyguard, Stuart von Moger. In the background is Daniel Jones, Avi Yemini’s bodyguard. Below : Yeminem, Jones and von Moger hanging out at a previous rally in Melbourne. 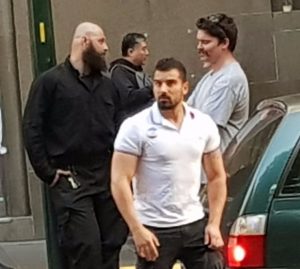 The anti-lockdown/anti-vaXX/anti-Labor ‘Kill Bill!’ rally in Melbourne on the weekend attracted thousands (NCA claims tens of thousands) of participants. The event was celebrated by many Tory luminaries, including political scientist and award-winning journalist Peta Credlin, who portrayed it as a righteous demonstration by Ordinary Mums & Dads who are sick and tired of Dan Andrews and have no desire to go back to Bosnia.

Which is par for the course.

Traces of QAnon were also present at the rally, as Claire Woodley, the daughter of The Seekers’ Bruce Woodley, dedicated her performance of I am Australian to the “brave victims of satanic ritual abuse”. The protests have won the fulsome support of Fox News Australia (and the Murdochcracy generally), but explicit political support has been limited to billionaires and grifters, with Josh Frydenberg being forced to express misgivings about Dan Andrews being compared to a Nazi. Obviously, given that Cliev’s major function is to funnel votes to the Coalition at next year’s federal election, Josh has to walk a fine line in terms of continuing to denounce state Labor while simultaneously distancing himself from the batshit views of a substantial proportion of the Tory voter base in Melbourne.

What made Sunday different was the increasingly close bonds between the political establishment and those holding extreme ideologies.

Researchers from anti-fascist group White Rose Society noted that federal United Australia Party MP Craig Kelly was photographed with Stuart Von Moger, an Australian neo-Nazi who was part of the now-defunct Lads Society. Kelly confirmed that he had security on the day but said he couldn’t recall the names of the personnel.

Liberal state MP Bernie Finn, who spoke at the protest, authorised a print advertisement for the rally in the Herald-Sun on Saturday. The advertisement linked directly to the Telegram channel for the organisers, who have repeatedly featured speakers with extreme beliefs in their events. Finn’s office did not return a call for comment.

Von Moger is one of many ‘right-wing extremists’ who work in the security industry (Licence Number : 807-109-91S) and, funnily enough, has also been employed in that capacity to protecc precious white babehs (and Bernie Finn).

Yesterday’s rally in Melbourne shows fascists and Nazis beginning to insert themselves more visibly into the movement and taking advantage of anti-lockdown and anti-mandate anger as Melbourne starts to open back up. 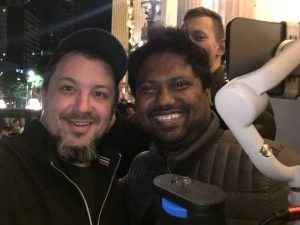 … and remember, the twentieth of november … 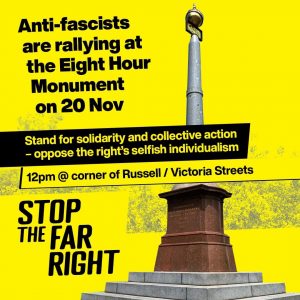