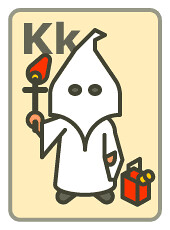 Fair dinkum and stone the bloody crows. As if McDonald’s flogging shit food and Starbucks flogging shit coffee weren’t bad enough, on Scumfront some Loser from Queensland has announced that the Invisible Empire has also opened a franchise Down Under:

Last Wednesday night (February 28), the White Loser Knights of the Ku Klux Klowns (WLK) stuck some silly racist propaganda under the windshields of a few cars in Toowoomba. As a result, we have generated some small amount of media attention regarding our pathological aversion to blackfellas. However, it appears that some other idiots have jumped in our car — a so-called Klan Wizard, David Palmer, a sparky from Sydney — a/k/a Fuehrer of the Australian National Socialist Defence of Aryan People Movement (NSDAP), Imperial Wizard of the Invisible Australian Empire of the Knights of the Ku Klux Klan, qualified chef de cuisine — will be claiming responsibility for a supposed ‘hate campaign’ in Toowoomba, and is making attempts to smear the otherwise untarnished reputation of the Australia First Party… I mean it’s not like anyone’s noticed that Dr. James Saleam has a criminal conviction for organising a shotgun attack on the home of Eddie Funde, the ANC‘s former representative in Australia, in January 1989… is it?

(2) David Palmer is in no way associated with the White Loser Knights — he is nothing but a trouble-maker and stirrer; whereas we are racist losers who dress in white sheets and poke holes in them so we can see out.

(3) We will be responding to the Courier Mail reporter who contacted us to set the record straight: yes, we have no bananas.

Our sincere apologies to members of the Australia First Party, and we wish them a speedy recovery. The trouble that has or possibly will make the papers was not intended. We assure you that this was not our goal and we will do everything we can to correct the situation. 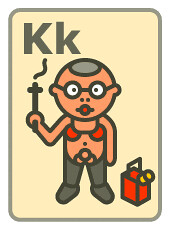 Residents of the south Queensland city of Toowoomba are being urged to embrace the city’s migrants after a racist flyer believed to be linked to the Ku Klux Klowns was found.

The flyer was left on a woman’s car in the city recently and has been given to police and the federal Attorney-General.

A TOOWOOMBA grandmother is outraged by a blatant recruitment drive by the white supremacist group the Ku Klux Klowns in the city.

An A4 piece of white paper, headed “Become a Klownsman or Klownswoman Today”, was placed under her car windscreen wiper while she was at the Repertory Theatre last Wednesday night.

She had parked on the Queens Park side of Margaret Street…

Everyone else should form an orderly queue.

I live in Melbourne, Australia. I like anarchy. I don't like nazis. I enjoy eating pizza and drinking beer. I barrack for the greatest football team on Earth: Collingwood Magpies. The 2020 premiership's a cakewalk for the good old Collingwood.
View all posts by @ndy →
This entry was posted in !nataS, Anti-fascism, State / Politics. Bookmark the permalink.