Megalo, megalo, megalo! Crazy crazy crazy Greek anarchists are up to their old tricks, setting fire to banks and cameras and throwing things at police: 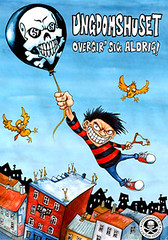 Further north, the Mayor of Copenhagen, Ritt Bjerregaard, has expressed anger at the anger expressed at her mindful destruction of the Ungdomshuset, an act of vandalism strongly resisted by local anarchists and other radicals. According to a report in The Copenhagen Post (‘Mayor loses patience with protestors’, March 5, 2007) Bjerregaard whinged that “‘I think they are completely out of line with what [I] can accept’ she told Politiken newspaper. ‘Violence isn’t a viable means in a society like ours'”; which is rather odd, given a) the use of a police terror squad to evict the Ungdomshuset to make way for a fundamentalist Christian sect in the first place, and b) the use of Danish mercernaries by the US state in its illegal invasion and occupation of Iraq.

An article in The Economist (‘Of riots and righteousness’, March 8, 2007) reveals something of the nature of the Mayor’s allies in her struggle to cleanse Copenhagen of youths uninterested in going to church or buying the over-priced commodities that cram its streets:

…The buyer was Faderhuset, a conservative Christian sect led by Ruth Eversen, a firebrand evangelist preacher [who has also compared her opposition to the forces of !natas].

Ms Eversen says that God told her to buy the house. “God often tells me to do things,” she claims. Her mission is to return Denmark to the Christian path, starting in Nørrebro, the district that houses not just the Ungdomshuset but also many Muslims. Ms Eversen has not revealed if she was also acting on God’s orders when she decided to demolish the building within hours of gaining vacant possession…

And who can argue with God? Certainly not a social democrat like Bjerregaard.

David Rovics, on the other hand, might. Further, he’s written a really neat summary of ‘The Battle for Ungdomshuset’ (t r u t h o u t, March 7, 2007), which also provides a useful account of the political context for this, the Danish bourgeoisie’s latest assault on radical culture — of which the Ungdomshuset was but one painful reminder (another, of course, being Christiania):

…Since 1982, Ungdomshuset has been a major center in Europe for the autonomous movement. People who have stood against corporate greed, stood for an egalitarian society. Against nationalism, for a world without borders. Against racism, for a world without discrimination and xenophobia. To these and other ends, Ungdomshuset has been host to thousands of concerts, workshops, meetings, conferences and protests.

The building that, at least up until last Thursday, housed Ungdomshuset, had a long history before 1982. It was built by the Danish labor movement in 1897 and was called Folkets Hus – The People’s House. VI Lenin spoke there before he [sic] launched The Russian Revolution. The Second International took place there. From that house, the first International Women’s Day was declared. It fell into disrepair and disuse in the late ’70s, and was squatted in 1982 by autonomous youth.

The police takeover of Ungdomshuset and the draconian security measures adopted over the weekend come at a time when the Danish government has shifted markedly to the right. The Rasmussen government has sent Danish soldiers to participate in the illegal occupation of Iraq. Denmark has recently passed some of Europe’s most restrictive asylum laws…

The eviction of the Ungdomshuset has been the catalyst for actions and protests around the world, including in Melbourne, where, according to a report on MIM, the Royal Danish Consulate-General of Melbourne had the words “Revenge For Ungdomshuset” sprayed on the front of the building housing it.

In Israel, Jonathan Pollock, an anarchist involved in the group Anarchists Against the Wall, was among one of 16 protesters injured by the IDF on Friday, March 9 during the weekly protest in the village of Bil’in. And ah, members of the Armenian Libertarian-Socialist Movement have established a blog, and are seeking contacts from around this bright, blue, but sadly dying planet.

And speaking of blogs and blogging, in the US, Josh Wolf continues to be imprisoned for refusing to submit to state authority (‘He must be crazy!’), now having spent 200 days in jail for so doing (Bob Egelko, ‘Mediator fails to free imprisoned blogger’, San Francisco Chronicle, March 9, 2007). Howard Kurtz questions Wolf’s status as a journalist in ‘Jailed Man Is A Videographer And a Blogger but Is He a Journalist?’ (Washington Post, March 8, 2007), a topic which Mark A. Phillips further pursues in Editor & Publisher Journal (‘Who’s a Journalist These Days?’, March 9, 2007): “Journalists with the “Big Ego disease” often point at bloggers and other people without press passes and accuse them of not being “real journalists.” But bloggers who provide analysis about newsworthy events are journalists…”.

Australian media continues its intensive coverage of the issue at the links below:

I live in Melbourne, Australia. I like anarchy. I don't like nazis. I enjoy eating pizza and drinking beer. I barrack for the greatest football team on Earth: Collingwood Magpies. The 2021 premiership's a cakewalk for the good old Collingwood.
View all posts by @ndy →
This entry was posted in !nataS, Anarchism, History, Media, State / Politics. Bookmark the permalink.