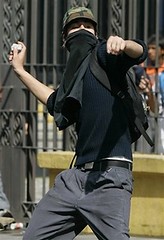 Above : Another stylish anarchist youth from Chile in Melbourne black (Image stolen from Bombs & Shields)

US Gub’mint spooks have been Breaking the Law! Breaking the Law! again — and just for good measure, have been caught with their pants on fire while doing so. Judging by their I.N.T.E.L.L.I.G.E.N.C.E., let’s hope that they don’t pay a side-trip to Melbourne when Bush comes to shove in Sydney in September, or a great number of local residents will be reaching for the sky (while hurriedly trying to disassociate themselves from a revolutionary opposition to capital and state).

A federal judge said yesterday he was “deeply concerned” about newly revealed evidence that FBI I.N.T.E.L.L.I.G.E.N.C.E. agents interrogated war protesters about their political views at a Washington rally in April 2002 and was seriously considering sanctioning D.C. government lawyers for insisting for three years that they had no record of the FBI’s involvement.

The D.C. attorney general’s office surprised the court March 23 by reporting that it had found a D.C. police log from the day of the rally — the same log city attorneys had repeatedly said did not exist since protesters sued the D.C. police in 2003. The heavily redacted document confirmed that FBI I.N.T.E.L.L.I.G.E.N.C.E. officers were with D.C. police at a downtown parking garage April 20, 2002, and were directly involved in the questioning of 23 protesters later arrested for trespassing.

Yesterday, U.S. District Judge John D. Bates ordered the city to explain within the next week why it took so long to find a log that the police department routinely maintains during protests and why several attorneys had said it didn’t exist. He also ordered the FBI to immediately begin looking more deeply for records of its presence and role in the incident.

Protesters claim in the suit that their constitutional rights to free speech were violated and that they were illegally detained on the pretext of trespassing. Protesters said plainclothes FBI agents who did not identify themselves asked them one by one while being videotaped about their political and religious beliefs and their associates in protest groups.

The FBI considered them suspicious because they wore black clothes, the log shows, a color the FBI associated with anarchist groups…

Similar semi-incomprehension is displayed by a hack writing for The Santiago Times on the subject of Chilean youth and its discontents (Nathan Crooks, ‘Chile’s Disaffected Youth Turn To Street Violence’, April 14, 2007). Three successive waves of protest — revolting students in May 2006, rioting on the anniversary of Pinochet’s 1973 coup (and on news of his death in December), and, most recently, in March — mean that “[t]o the world, a normally safe, business-orientated city looked like a war zone”.

Driving the trend is an increasingly disenfranchised youth, most of whom use the Internet to communicate and have no specific goals other than a shared resentment of society in general. A lax judicial system and increased media coverage are making the problem worse…

Jorge Lizama, a 19-year-old high school dropout, anarchist, and animal-rights activist, has emerged as a poster child in Chile’s current street struggles. He was arrested late last month for attacking the car of Justice Minister Gloria Chevesich during the March 29 protests and is also… accused of tossing a Molotov cocktail at the La Moneda Presidential Palace last year…

Lizama… came to feel at home with the many anarchist groups that operate in Chile. Using mostly the Internet to communicate, Chile’s anarchists are not organized [sic], are without leaders, and have no hierarchy. The only thing that unites them is a shared discontent with society.

“These kids are hostile to the system, and they feel threatened and excluded,” said Roberto Méndez, the president of survey firm Adimark. “They take their anger out on anything that represents the system, such as the Transantiago, and they are most aggressive towards the left wing sectors of the governing Concertación coalition because they feel they sold out to the current model.”

…Some suggest that Chile’s media is also inciting the violence. After the March 29 protests, Interior Minister Belisario Velasco blamed several television programs for promoting the violence. “A lot of the content on TV was almost a call to violence,” he said in a conversation with Radio Cooperativa. Both print and television media gave widespread coverage to the impending protests, and on March 29, one channel broadcast the live looting of a grocery store in Santiago.

Chile’s legal system is also a problem. Prosecutors must not only prove that the accused committed a violent crime, but also that they intended to commit the crime. When apprehended, most minors are released to their parents as it is assumed that they are incapable of criminal intent. Many bands of youth organize their protests so that only minors commit violent acts to take advantage of the system.

But the free pass may soon be over. Bachelet will sign legislation in June removing the requirement to prove intent in crimes committed by youth, and she is also floating legislation to hold parents legally responsible for the crimes their children commit.

While Bachelet’s firm hand has been applauded by many, it may be too little or too late. Méndez said that Chile’s students are angrier this year than ever and that university students are now joining what were once high school protests. “The risk of another student conflict, one more powerful than last year, is extremely high,” he said. “Chile has changed since last year, and respect for authority has declined. As was the case before, the situation is preventable. But it remains to be seen if the government will take appropriate measures to deactivate the movement or if the situation will be allowed to turn into the third, and possibly fatal, crisis of Bachelet’s presidency.

And on a final, black, !cinataS note, ‘Colonel’ William Hoff (‘Wild Bill’) of the US-based neo-Nazi NSM (who did an Ian Stuart last December), “took a secret with him to the grave, one he couldn’t share with his NSM buddies. Wild Bill, an icon of white supremacy, was himself part black” (Robert W. Dalton, ‘A force in NSM’, Spartanburg Herald-Journal, April 15, 2007).

I live in Melbourne, Australia. I like anarchy. I don't like nazis. I enjoy eating pizza and drinking beer. I barrack for the greatest football team on Earth: Collingwood Magpies. The 2021 premiership's a cakewalk for the good old Collingwood.
View all posts by @ndy →
This entry was posted in !nataS, Anarchism, Media, State / Politics, War on Terror. Bookmark the permalink.