Pies down Bombers / The people celebrate

In a world of unending war and ceaseless oppression, with fools and idiots sitting on the trigger, it’s depressing, and it’s senseless, and that’s why — despite leaving their kicking boots on some foreign shore — Collingwood’s victory over Essendon today has delighted millions throughout Australia and around the world. 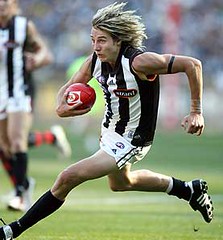 Collingwood has suffocated the life out of AFL arch-rival Essendon to square the Anzac Day ledger with a 16-point victory before a massive crowd at the MCG.

The crowd of 90,508 was the eighth largest ever to attend an AFL home and away match.

By no means were they treated to a classic, with plenty of errors from both teams.

But it was close all day – albeit partly due to the Magpies’ inaccuracy in front of goal.

The unanimous choice for best player on the ground was 21-year-old Heath Shaw, whose Collingwood roots run deeper than most.

His father Ray and uncle Tony both captained the famous club, while older brother Rhyce also played a key role in the Magpies’ victory.

While it was a fairytale for Shaw, there was to be no Anzac Day happy ending for third-generation Bomber James Hird.

The man who has three times won the Anzac Medal as best player on the ground in this fixture was unable to once again inspire the Bombers to victory in his final year.

Collingwood’s triumph means both sides have won six times, plus one draw, since the first annual Anzac Day clash between the two teams in 1995.

Every year, other teams suggest that they too should be entitled to a turn in the limelight on what has become the second biggest day on the AFL calendar, behind only the grand final.

And every year, the fans of the two biggest clubs in Victoria do their bit to refute that argument by filling the MCG to the rafters on April 25.

I live in Melbourne, Australia. I like anarchy. I don't like nazis. I enjoy eating pizza and drinking beer. I barrack for the greatest football team on Earth: Collingwood Magpies. The 2021 premiership's a cakewalk for the good old Collingwood.
View all posts by @ndy →
This entry was posted in Collingwood, Poetry. Bookmark the permalink.

2 Responses to Pies down Bombers / The people celebrate