APEC : The Australian on The UnAustralian

Stand up and be counted
For what you are about to receive
We are the dealers
We’ll give you everything you need
Hail hail to the good times
‘Cause rock has got the right of way
We ain’t no legend, ain’t no cause
We’re just livin’ for today 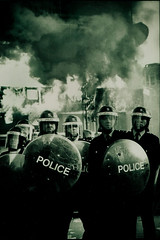 A MELBOURNE group has announced its intention to violently disrupt next week’s APEC summit and has issued a call to action to recruit more people for a “mass, strategic intervention”.

The group, AC/DC, which is believed to be aligned with the anarchist political movement, plans to act as a “mobile disruption” unit during APEC, which will be held in Sydney for a week from Sunday.[1]

AC/DC’s open letter, posted on a number of internet forums [Aotearoa Indymedia, August 10], said APEC “promotes exploitation, inequality and the destruction of the planet” and acknowledged the group’s actions might be seen as violent.[2]

“By the very praxis of stepping out and challenging their control of space, we are committing what is regarded as a violent act,” the letter reads.

“It is the violence of articulating resistance; it is a violation against their understanding of our lives.”

The letter says it is important “that we stay safe and minimise the repercussions of police repression in our families and communities”.

A spokesman for the Stop Bush Coalition, organisers of the biggest APEC protest on Saturday, September 8, insisted its march would be peaceful.

“We’ve clearly indicated that we intend for this to be a peaceful protest and we’ve chosen a march route that signals we’re not interested in a confrontation with police,” Alex Bainbridge [DSP] said.

“We’re confident that’s going to happen on the day.”

The march, which is expected to attract 5000 people, will highlight the issues of the war in Iraq, a comprehensive response to climate change and workers’ rights.

“I don’t think it’s very likely,” he said. “We’ve seen in the past these sorts of things get exaggerated in the media and then we turn up on the day and nothing happens.”

He said he was more concerned about police violence against protesters.

“We’ve had this whole scare campaign for months of new water cannons, new stun guns, the new fence being set up and new police powers,” he said. “It’s not outlandish to think there might be some police that might be trigger-happy.”

NSW police beefed up security for APEC and bought a $600,000 water cannon to assist with protest control.

NSW police superintendent Peter Lennon said yesterday work would begin on Saturday on a major security fence around parts of the CBD.

“It will take some four days,” he said. “There is a smaller fence being built in Darling Harbour but the main fence will start on Saturday.”

AC/DC’s announcement follows concern over the intentions of anarchist group Mutiny, partly blamed by the Victorian Government and police [3] for violence at last year’s G20 protests in Melbourne.[4]

At a Stop Bush Coalition meeting in April, members of Mutiny and other protest groups Solidarity and the International Socialist Organisation argued to remove the line “join the peaceful protest against these warmongers” from a poster advertising the September 8 rally.

Mr Bainbridge said he would not comment on what occurred in meetings of the coalition.

Simon Cunich, a member of Resistance – one of the groups involved in the Stop Bush Coalition – was at the April meeting.

Resistance is organising one of the other major protest actions of the APEC period: a student walkout next Wednesday over the policies of George W. Bush.

Mr Cunich said the rally would be “entirely peaceful” and would give high school students the chance to “show their opposition to everything that Bush represents”.

[1] Er… assuming the Socialist Party is involved in the group, such a belief would be mistaken.

1. We recognise that APEC is an illegitimate institution in the eyes of the mass of the human population, and that its agenda is a threat to our welfare and environment. We are therefore in favour of the largest possible mass mobilisation and mass demonstrations against it

2. We aim to disrupt the functioning of any APEC-related activities in Sydney in September 2007

3. We defend our right to mass civil disobedience and mass direct action and we will attempt to use these tactics as part of our resistance to the agenda of APEC

4. We reject the police and the state’s attempts to define and control our protest and our resistance through the use of declared areas, protestor black lists and other forms of state intimidation

5. We want to convince other groups, individuals and communities to join us in resistance to APEC that is meaningful and empowering

[3] To be precise: Alex Bainbridge’s comrade Marcus Greville — like Bainbridge, designated by the DSP-dominated Coalition as media spokesperson — also of the DSP, cast the first stone, on ABC radio, on November 20. “JOSIE TAYLOR: Who were the people responsible for that violence? MARCUS GREVILLE: The names of the groups are Arterial Bloc and a group called Mutiny.”

[4] February 1981: AC/DC tour Australia, with big riots after the Sidney Myer Music Bowl gigs. 23 arrests after Friday’s gig; during and after Saturday’s gig over 60 are arrested. 30 suburban trains and dozens of trees around the Bowl are damaged. Fighting at Jolimont Station; hospitals are full of people suffering drug overdoses, broken limbs and lacerations…

Back in Black was a worldwide smash. It made number two on the Australian charts and a tour was announced for ’81. The band’s Melbourne concert was one of the most significant moments in the great sharp epic. It was the grand finale, the last big night on the town. The cult carried on for a few more years, but it was trudging to a fall. Sharpie ended that night, it just took a while for word to get around. Held at the Myer Music Bowl during the Moomba Celebrations, the concert was at once a wake and a whale of a party. The Seedies/The Music Bowl/Moomba — ultimate sharpie.

The gangs came out in force. They ran amok. Gloves off.

Bill: “They were everywhere, it was like they’d all taken their clothing out of their glory boxes for the night.”

Chris: “Every sharp in Melbourne would’ve been there, they went beserk, smashed all the trains and trams, pulled the cops off their horses, a riot. I got smacked in the mouth and ran for my life. By this stage I was into punk, The Ballroom, speed, to me these kids, with the moccasins and the ‘Bon Scott RIP’ t-shirts, they weren’t sharpies, they were just headbangers.”

See also : Fear and APEC in Australia (theory of the offensive) for further disco…

I live in Melbourne, Australia. I like anarchy. I don't like nazis. I enjoy eating pizza and drinking beer. I barrack for the greatest football team on Earth: Collingwood Magpies. The 2021 premiership's a cakewalk for the good old Collingwood.
View all posts by @ndy →
This entry was posted in !nataS, Anarchism, State / Politics. Bookmark the permalink.