How To Make Trouble & Influence People 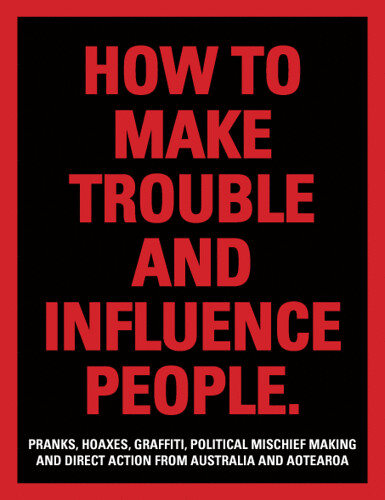 ‘Sweet’ and ‘choice’: Breakdown Press is bringing out a new edition of How To Make Trouble And Influence People, a hugely entertaining compilation of contemporary and historical accounts of political mischief and trouble making, piss taking, and general monkey business. Both How To Make Trouble (Edited by Bon Scott and Gary David / Political Hooligans, SCAM Publications, Brunswick, 1996) and its sequels — How to Stop Whining and Start Living (Question Mark Collective, SCAM Publications, Brunswick, 1998/9?) and Revenge Of The Troublemaker (Question Mark Collective, Homebrew Cultural Association, Melbourne, 2003) — were Once Upon A Time among the most popular titles for sale @ Barricade. They was also inspired by Buffo!, “Amazing Tales of Political Pranks and Anarchic Buffoonery”, published in 1984 as part of Larry Law’s Spectacular Times series: a must-read for inquiring minds, and one of the bestest, least pretentious introductions to the life and anti-work of the Situationist International (1957–1972).

Anyway, don’t take my word for it. Take Larissa’s. She’s a journalist.

“…But my favourite artistic stunts involve no personality-driven grandstanding, rather a delight in perplexing people in complete anonymity. A little compilation of Australian pranks and hoaxes called How To Make Trouble and Influence People is — going by the imagination-free bubble episode — probably a more useful publication for the uni student neophyte than the official orientation guide.

I bought my photocopied, hand-stapled copy from Barricades [sic] bookstore in Brunswick’s Sydney Road almost a decade ago. Barricades is itself long gone now — a smart cafe that serves babychinos stands where the skanky bookshelves once were…”

And this is what the experts have had to say:

Günter Minnerup, ABC, August 2000: “I think it would be ludicrous to expect that adjustments to these changes [‘globalisation’] and an intellectual, pragmatic, and political responses to this new climate of the 1990s would appear overnight; it is a question of almost rebirth, and this relaunch, or rebirth I think, is what is really the big issue as we enter the 21st century: how to revive a popular movement against capitalism, a radical movement, a radical anti-systematic anti-capitalist movement which while on one hand preserving what was best about the Social Democratic and Communist traditions of this first wave, also is capable of resuscitating the radicalism, the fundamentalism of the early phase of that movement in the new setting, the protests against the WTO in Seattle, then the World Bank in Washington, and who knows very soon in Australia, in Melbourne, are just the tip of the iceberg of this.”

James Walter, ABC, September 2006: “Then again, liberalism itself provoked the major Western dissenting traditions: social democracy, socialism, communism, and anarchism, each of which promoted distinctive versions of the conditions for freedom and equality. Yet where these are treated, they are posed as separate; the inter-relations and interdependencies of such ideological terms are obscured. Curiously, there are no entries for communism or for anarchism. Perhaps they are excluded as archaic, but it would be difficult to explain relatively recent divisions in Labor politics without referring to communism. As for anarchism, it appears to have little contemporary relevance. But a serious student might have been encouraged to see how its pioneering of ‘the propaganda of the deed’ feeds directly into modern terrorism. Further, anarchism’s argument for devolution to self-organising communities of individuals, who would resist the juggernauts of both state and market, has influenced green politics and libertarianism.”

CALLOUT for Submissions:
How To Make Trouble And Influence People

In late 2008 a new edition of the How To Make Trouble And Influence People series of books will be published including all three of the original books plus new chapters, interviews, graphics and more!

For those not familiar with the series so far each book has compiled listings and tales of left wing and anarchist political satire, pranks, hoaxes and direct action from Australia and Aotearoa alongside photos of graffiti, billboard revisions and protests and reprints of posters, flyers and stickers.

So what we want from you … from the smallest local happening to the grandest most ambitious hoax imaginable!

• STORIES for HISTORICAL LISTINGS – on all the above.
Preferably short pieces describing an event, group, parody, etc. See below for examples.

Submissions due before 1st May 2008

To contribute or to get in touch please email either:
info (at) breakdownpress.org
thebugler (at) graffiti.net
Or post to:
PO Box 1283 Carlton Melbourne VIC Australia 3053

We cannot guarantee that all works submitted will be published and also unfortunately we cannot pay contributers.

Looking forward to hearing all your tales of creative political trouble making!

Examples of stories for listings:

Hobart, 1997 – During the city’s fifth Critical Mass cyclists ride round and round a McDonald’s Drive-Thru with police, sirens blaring and lights flashing, in tow.

Perth, 1980 – A man carrying a shovel is arrested in the garden adjoining Premier Sir Charles Court’s Dalkeith mansion. When asked what he is doing he informs police that he is the Chairman of a mining venture and that he wishes to gain insights into the local tribe’s sacred sites – their rose bushes – before beginning mining.

Wellington, 1983 – The Universal Fur Co. Ltd. has red paint thrown over its door and footpath outside and posters are stuck to its windows reading “Fur bearing animals everywhere would like you to stop and think!”

Sydney, 1997 – Greenpeace activists occupy the roof of the Prime Minister’s residence Kirribilli House installing solar panels and calling on him to take action against climate change.

Melbourne, 1947 – In a precursor to future anti-car actions Melbourne University Trinity College students divert city-bound traffic from Sydney Road into the Trinity College cow-paddock (as it was then) creating an enormous amount of chaos in the process.

Newcastle, 2007 – Over 100 people participate in a flotilla of kayaks, canoes and small boats attempting to block the movement of coal ships along the harbour’s main shipping channel.

Armidale, 1973 – Student environmentalists cut down every billboard on the highway between Armidale and Glen Innes in a protest against consumerism and visual pollution.

And a few more for good measure:

Sydney, 1972 – Two NSW BLF activists are arrested for attempting to cut down the SCG goal posts, hours before the infamous Springbok tour.

Melbourne, 2001 – Members of Snuff Puppets performance group grab flags off people during the Federation parade, tearing out the Union Jacks before handing them back.

Adelaide, 1929 -­ Unemployed join the annual ANZAC Day march with banners reading “We had a job in 1914-1918. Why not now?!” Police attempts to confiscate the banner are defeated by unemployed diggers and their sympathisers.

How To Make Trouble And Influence People is a self improvement primer full of testimonials from numerous happy and satisfied troublemakers.

A literal empower house, this book compiles several graphics, stories and real life examples of graffiti, political satire, hoaxes and general Australasian mischief making with the aim of providing inspiration and entertainment to those persons feeling unhappy, unfulfilled or just plain bored with their lives. Social change and personal liberation need not be boring, just follow the examples herein and you too can follow the patented Political Hooligan™ path to enlightenment. Personal power, untold spiritual riches and control of your worthless existence is just around the corner when you purchase this valuable book!

I live in Melbourne, Australia. I like anarchy. I don't like nazis. I enjoy eating pizza and drinking beer. I barrack for the greatest football team on Earth: Collingwood Magpies. The 2021 premiership's a cakewalk for the good old Collingwood.
View all posts by @ndy →
This entry was posted in !nataS, Anarchism, Anti-fascism, Art, Cats, Collingwood, Film, History, Media, Music, Poetry, Sex & Sexuality, State / Politics, Student movement, Television, Trot Guide, War on Terror. Bookmark the permalink.

1 Response to How To Make Trouble & Influence People