I still wonder why I bother, and it appears that a gig in Brunswick on the 71st anniversary of the Spanish Revolution is not a gig too far…

Thanks for your concern regarding the Sham 69 show.

From the venue’s perspective, whilst we may not support the type of behaviour cited below, we do not censor shows and respect the right of artists who play here to book support acts of their choice.

We aim to provide a safe and comfortable environment for all of our customers and will be ensuring this is the case for the Sham 69 show.

Do let us know if you hear back from the band and if you have further concerns please don’t hesitate to contact me or our manager K.

A LOCAL woman who was intimidated and racially abused by a group of men last month will attend a protest against neo-Nazism outside a Fitzroy pub.

A coalition of local groups is organising the “peace movement” in response to a neo-Nazi concert at the Birmingham Hotel on Saturday, September 23, held to commemorate the death of British white supremacist Ian Stuart.

Blondien (not her real name) says she was walking alone to her car on Johnston Street the same night when she was surrounded by about seven men. She says the men screamed abuse at her, calling her a black c..t and forcing her to repeat the insults.

“It’s disgusting that people would single out one person and you have to say stuff about your race to get out of it,” Blondien said.

Music is planned for the protest on Saturday, October 28, at 1pm outside the Birmingham. 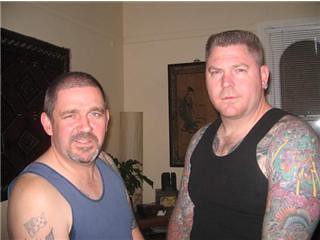 RACE MIXING SEEMS TO BE BECOMING A TRENDY THING AMONGST OUR YOUTH TODAY IN AUSTRALIA: WHAT DO YOU THINK OF THIS?
Chumley: The band have never been too keen on mongrels, and it sickens us to think that anyone could stoop to such levels.

WHAT DO YOU THINK OF HOMOSEXUALS, AND HOW SCHOOLS PROMOTE HOMOSEXUALITY THESE DAYS?
Chumley: The way the gay community have been given the ticket from out of the closet and on to our streets is an abomination, and the way filthy commie teachers incubate this disease is another example of just how far Australia has fallen. We are absolutely disgusted with the way things are at present, but things will soon change.

DO YOU HAVE ANY OPINION ON THE CURRENT CRISIS IN THE WEST BANK BETWEEN THE JEWS AND THE PALESTINIANS?
Chumley: As everyone can see the ever troublesome Jews are up to their old tricks by causing mass disorder. So we think that the Palestinians should wipe the Jews out and take back Palestine, then we should go in and wipe the Arabs off the face of the Earth.

WHAT DO YOU THINK OF THE AUSTRALIAN NATIONALISTS MOVEMENT?
Chumley: It makes a lot of sense.

How did the oi! skins and nationalist/[white power] skins get along in Australia? What is your opinion on that? And how are things today?
Simon: All my mates were into oi! and white pride as well. I did not know any skinheads that were into oi! and were not white and proud of it. Lefty skinheads would never dare to show their face on the street for fear of getting severely beaten. And that’s the way it should always be…

What is the best memory with White Lightning and or any other “scene thing”?
Simon: Best memory was playing a gig in Melbourne, in some pub, can’t remember which, full swing into it and about 30 Maoris drinking in the front bar… I’m sure you can picture what happened. Bedlam. We managed to protect all our gear however. Mic stands make magnificent clubs…

You go to the football, what ya gonna do
Go out at night, take your mates with you
And when you fight, you fight to win
No one’s gonna beat you, no one’s gonna do you in

Hanging ’round the streets, when someone starts on you
You kick their teeth down their throat, beat ’em black and blue
Don’t care about jail, don’t care about the law
Take vengeance on your enemies, as you’ve done before

We rule, OK
Death to you bloody scum, now is judgment day
We rule, OK
We fight for freedom, and we will have our say…

I live in Melbourne, Australia. I like anarchy. I don't like nazis. I enjoy eating pizza and drinking beer. I barrack for the greatest football team on Earth: Collingwood Magpies. The 2023 premiership's a cakewalk for the good old Collingwood.
View all posts by @ndy →
This entry was posted in Anti-fascism, History, Music. Bookmark the permalink.