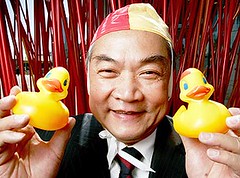 Above : My bro’ John So, Lord Mayor of Melbourne, in rapt anticipation of The Great Australia Day Duck Race. Angry white supremacists have denounced the event, claiming that white ducks are being held back by the forces of multi-culturalism in a race that they would otherwise surely win.

Huh. Apparently, according to the Australia Jewish News, there’s been a spate of vandalism in Jewish Melbourne:

MELBOURNE’S Jewish community was preyed on last weekend with a synagogue, two eateries and a local phone box all targeted by vandals. Caulfield Hebrew Congregation (CHC), one of Melbourne’s largest and most prominent synagogues, and Caulfield North’s kosher Park Grill Restaurant were daubed with swastikas. In addition, Glick’s Bakery in Balaclava’s Carlisle Street suffered thousands of dollars of damage when its two shopfronts were partially smashed in a rock attack. A phone box on Bambra Road in Caulfield was also spray-painted with a swastika. A spokesperson from Victoria Police said it was too early to link the attacks and said there was no evidence at the moment to suggest the Glicks vandalism was racially motivated. The spokesperson said local police were investigating…

RACE HATE MONTH IN MELBOURNE IS THIS MONTH!!!!!! RAHOWA!

Needless to say, the relevant thread on Stormfront was — after the inevitable degeneration into accusation and counter-accusation that any conversation involving the Reverend entails — soon closed, and has since been deleted.

Patrick is known for two things (or maybe even three). The first is his status as a Reverend in various incarnations of ‘Creationism’, a tiny, weird-arse cult for white supremacists. Currently, Patrick belongs to the sect known as The Creativity Movement (nee World Church of the Creator (WCOTC)), whose slogan is “Mobilizing Nature’s Finest Since 1973”. The ‘Church’ was established by a bloke called Ben Klassen, on the sneaky-clever grounds that if you wanted to establish a white supremacist organisation, why not go for tax-exempt status? It didn’t work, Klassen committed suicide in 1993, the man who assumed his place (as Pontifex Maximus) Matt Hale, sits in jail (Register Number: 15177-424, Release Date: 12-06-2037, Location: Florence ADMAX USP) and his most dedicated follower in Melbourne is a barely literate ex-prisoner named Patrick.

(Oh, there’s also been a number of subsequent splits in the Church.)

Which brings me, of course, to the second fact about the Right Reverend.

Just a short note to say that I was released from J.O.G prison this week. The J.O.G maggots didn[‘]t break me and Creativity here in Australia continues foreward [sic].
DELENDA EST JUDAICA!
RAHOWA! 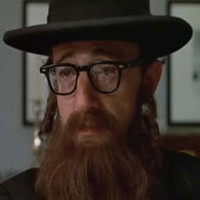 Above : A rare photograph of the man many white supremacists believe is the elusive head of JOG. (Or possibly ZOG.)

Rahowa! Anyway, here’s what was reported at the time of O’Sullivan’s sentencing:

A white supremacist, who recently vowed nothing could stop him, was behind bars last night after being convicted of stabbing a man who challenged his views. Patrick John O’Sullivan, Victorian leader of the World Church of the Creator, was found guilty by a County Court jury of bashing and stabbing a man. O’Sullivan, 31, claims to have been ordained as a reverend by the church’s US affiliates, but the jury yesterday proved to be an even higher power when it found him guilty of two serious assault charges. The court heard he was chanting “white power” with a group of people at a Fitzroy house-warming in May 1999. Another guest at the party started talking to O’Sullivan about his white supremacist views. They then started to debate whether O’Sullivan could be considered a Nazi because he did not have German blood. The jury found he then either butted or punched the victim in the head before stabbing him in the abdomen. The victim received a 5cm-deep wound. O’Sullivan, unemployed, of North Melbourne, had pleaded not guilty to intentionally causing serious injury and intentionally causing injury. He told the Sunday Herald Sun his group did not condone violence, but “there’s no stopping us”. The four-day trial was before Judge Bill White, who is expected to sentence O’Sullivan today.

The third thing about the Reverend worth noting is that he used to drink at The Tote, but is now only welcome at pubs like The Birmy. His relations with other white supremacists and neo-Nazis remains fairly tenuous, however, and especially in terms of the relationship between the Reverend and his handful of teenage followers and other highly Creative people such as Brother Michael (WCOTC Queensland) and the Reverend Col Campbell 3rd, Komandant WCOTR, both leaders (and likely sole members) of rival sects.

Finally, Creativity sites seem to come and go as often as its practioners go into and out of jail, but Creative people may currently be found in Australia, Croatia, Germany, Italy, Norway, Slovakia, UK, Ukraine, USA and doubtless other countries as well; in fact, in almost any country in which there’s a sizable contingent of boneheads.

WCOTC Australia: Queensland (Brother Michael) : http://www.qcotc.asn.au/
“Should we not be pushing our own agenda and even, to a point, agreeing with the blacks of Australia in calling it “Invasion Day” but with the proviso that we should finish off the invasion good and proper?”
Church of the Rahowa : http://www.churchoftherahowa.com/
[Members Only]
The Creativity Alliance (Reverend Doctor Thomas Darwin, B.S. Ph.D.) : http://www.creativityalliance.com/
“Let us never forget Ben Klassen’s admiration of Queen Isabella of Spain, a highly intelligent woman who courageously and cleverly masterminded military expeditions and set the moral and racial tone of Spain by expelling the perfidious Jews and mongrel hordes.”
The Creativity Movement : http://www.creativitymovement.net/
“Join us in our fight my White Brothers and Sisters in saving our race. Let us make 2007 be a year in infamy to the Jews mud’s [sic] and white traitors.”
White Racial Patriots : http://www.tworca.org/
“We have a lot to live up to, as today’s White Racial Patriots!” ~ Commander Jeff Schoep/NSM (“America’s Nazi Party”)
“Multiculturalist television propaganda is rampant in fictional television shows, largely as an American phenomena, but aired on Australian television stations. Such propaganda is usually expressed in one of several identifiable ways: 1. Anti-White propaganda, whereby White racial patriots are portrayed as rednecks, stupid, and/or violent; whereas Black racial patriots are portrayed as determined, clever, and/or righteous.” ~ Andrew Patterson, European People’s Anti-Defamation Organisation

Anyone wishing to join with the Reverend on his righteous Crusade, on the other hand, can reach him via:

Alternatively, interested readers may consider applying the principles of Creativity to their role-playing pursuits: