The Gospel According to Peter

After careful consideration, polling, the opinions of his advisers, a quick check with a physician and a priest (to confirm that he remains without a beating heart or a living soul) and, last but by no means least, a corruption scandal at the Australian Wheat Board, Australian Treasurer Peter Costello has declared war on Australia’s Muslims:

Or words to that effect:

“People come to Australia and become Australian citizens because they want to embrace the things this country stands for. We should be proud that people from all over the world come here looking for Australian values – our values – and want to embrace them. Values like economic opportunity, security, democracy, personal freedom, the physical environment and strong physical and social infrastructure.”

Apart from demonstrating that our state’s principal bean-counter is illiterate — “the physical environment and strong physical and social infrastructure” aren’t moral values Peter — in the gospel according to Peter, the state is God, the government its Church, and Muslims are the Jews under Roman rule: bearers of an alien culture and religion which threatens to infect its host with illiberalism and anti-democratic notions.

But is Peter Costello really just Pauline Hanson in drag?

Hanson: Libs steal my view
AAP
February 24, 2006FORMER One Nation leader Pauline Hanson says Treasurer Peter Costello’s comments that people who come to live in Australia should show loyalty to its values are a vindication of her own views.

Ms Hanson said she was “crucified” and called a racist during her political career.

“I could foresee what was happening to our country,” Ms Hanson told ABC Radio.

In a speech last night to the Sydney Institute, the treasurer said people who wanted to live under Islamic sharia law should move to a country where they would feel “more at ease”.

He said anyone not prepared to accept Australian values, and who had citizenship of another country, should not remain an Australian citizen.

Ms Hanson called on Mr Costello to follow through with his claims.

“If Peter Costello is wanting to be a future prime minister of this country he needs to take a tough stand on this,” she said.

“He needs to deal with it harshly.

“He needs to throw these people out of this country who do not embrace Australia.”

But what, precisely, is this ‘Australia’ to which recent Australian citizens must pledge their undying allegiance to, or fuck off? The values Costello purports to champion — in essence, liberal democracy — are hardly uniquely ‘Australian’. In reality — as opposed to the fairy tale world Costello pretends to believe in — such ‘values’ have their origins in Western Europe. Historically speaking, one variant or another of the modern, liberal democratic state has been adopted or, largely, imposed upon the rest of the (majority) world since. Further, the degree to which the modern capitalist state is either ‘liberal’ or ‘democratic’ has been determined not through the fatuous observations of politicians, but through many centuries of determined struggle; struggle against the kinds of powerful economic and political interests Costello does his best to represent in the Australian Parliament.

As an Australian citizen,
I affirm my loyalty to Australia and its people,
Whose democratic beliefs I share,
Whose rights and liberties I respect,
And whose laws I uphold and obey.”

And yet, ‘ironically’, it’s Costello’s mob that is doing its level best to remove any real content from Australian democracy, to undermine our rights and liberties and to demonise those who object. 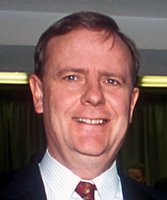 Peter needs a clip ’round the ears.

I live in Melbourne, Australia. I like anarchy. I don't like nazis. I enjoy eating pizza and drinking beer. I barrack for the greatest football team on Earth: Collingwood Magpies. The 2021 premiership's a cakewalk for the good old Collingwood.
View all posts by @ndy →
This entry was posted in Anti-fascism, History, State / Politics, War on Terror. Bookmark the permalink.