“If a bunch of fags or muslims can organise a march or a rally, then surely we can do the same.”

It also happens to be the International Day for the Elimination of Racial Discrimination.

The International Day for the Elimination of Racial Discrimination is observed annually on 21 March. On that day, in 1960, police opened fire and killed 69 people at a peaceful demonstration in Sharpeville, South Africa, against the apartheid “pass laws”. Proclaiming the Day in 1966, the General Assembly called on the international community to redouble its efforts to eliminate all forms of racial discrimination.

The walking abortion was, however, eagerly endorsed by the nutzis belonging to Canadian group the Aryan Guard, perhaps 40 of whom strolled about Calgary on WPWW Day last year. This particular division of the Master Race has been profiled — extensively — by OPP, and Anti-Racist Canada has also published a three-part series on the boneheaded wankers. In addition, Anti-Racist Canada has details of the Guard’s plans for 2009. Local nutzis have become terribly excited about also stepping out this year, but Perth Pioneer Little European Paul Innes advises caution, not to congregate in groups, and perhaps merely sticks up one or two pieces of of his Fat Yanqui Controller Mister Don Black’s propaganda.

These foots were made for walking… 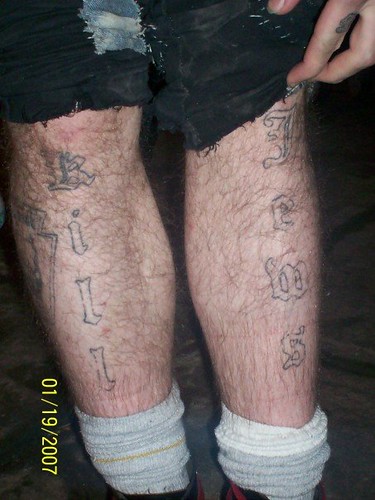 2 Responses to “If a bunch of fags or muslims can organise a march or a rally, then surely we can do the same.”