Southern Cross Soldiers can has manifesto.

Following some bad press, Australian yoof belonging to the ‘Southern Cross Soldiers’ have struck back. 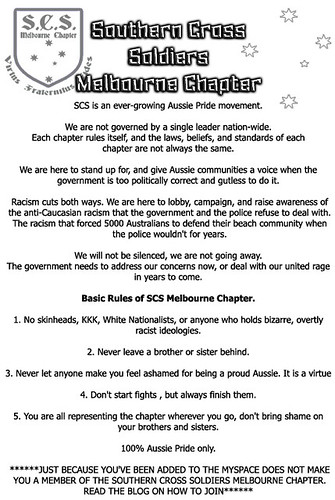 …We are here to stand up for, and give Aussie communities a voice when the government is too politically correct and gutless to do it.

Racism cuts both ways. We are here to lobby, campaign, and raise awareness of the anti-Caucasian racism that the government and the police refuse to deal with. The racism that forced 5000 Australians to defend their beach community when the police wouldn’t for years.

We will not be silenced, we are not going away.

The government needs to address our concerns now, or deal with our united rage in years to come.

1. No skinheads, KKK, White Nationalists, or any one who holds bizarre, overtly racist ideologies…

The Soldiers are not racists, just patriotists, inspired by the actions of the mob in Cronulla that attacked several dozen individuals for the crime of going to the beach while being ‘of Middle Eastern appearance’. The Soldiers believe that there is widespread ‘anti-Caucasian’ — meaning, presumably, ‘anti-White’ — racism, and that the 5000 soldiers who bravely battled several dozen beach-goers in Cronulla in December 2005 were also responding to this problem, one ignored by police and government authorities.

They don’t start fights with Lebs and wogs; they finish them.

The Soldiers also don’t have a General, but they do follow in a general direction. Thus the Cronulla pogrom was greatly encouraged by multi-millionaire Sydney shock-jock Alan Jones, who proudly declared “I’m the person that’s led this charge”.

The riot was still three days away and Sydney’s highest-rating breakfast radio host had a heap of anonymous emails to whip his 2GB listeners along. “Alan, it’s not just a few Middle Eastern bastards at the weekend, it’s thousands. Cronulla is a very long beach and it’s been taken over by this scum. It’s not a few causing trouble. It’s all of them.”

Sunday’s trouble did not come out of the blue. It was brewing all week on talkback radio — particularly on 2GB.

Radio doesn’t get much grimmer than Alan Jones’ efforts in the days before the Cronulla riot. He was dead keen for a demo at the beach — “a rally, a street march, call it what you will. A community show of force.”

He assured his huge audience he “understood” why that famous text message went out and he read it right through again on air. “Come to Cronulla this weekend to take revenge. This Sunday every Aussie in the Shire get down to North Cronulla to support the Leb and wog bashing day …”

Daily he cautioned his listeners not to take the law into their own hands, but he warmed to listeners who had exactly that on their minds.

Last Thursday Charlie rang to suggest all junior footballers in the Shire gather on the beach to support the lifesavers. “Good stuff, good stuff,” said Jones.

“Come to Cronulla this weekend to take revenge. This Sunday every Aussie in the Shire get down to North Cronulla to support Leb and wog bashing day” was the text message widely distributed among concerned citizens prior to December 11, 2005, and every little Soldier’s heart now swells with pride at the memory of the White Civil Uprising.

Beyond Pride — which apparently comes before a fall, according to Australia’s first Prime Minister Gough Whitlam (or possibly Paul Keating) — the ever-expanding Soldiers are also very keen to demonstrate that they are Australian. Australians cannot spell, but they can get sunburned.

I live in Melbourne, Australia. I like anarchy. I don't like nazis. I enjoy eating pizza and drinking beer. I barrack for the greatest football team on Earth: Collingwood Magpies. The 2023 premiership's a cakewalk for the good old Collingwood.
View all posts by @ndy →
This entry was posted in State / Politics, Student movement. Bookmark the permalink.

47 Responses to Southern Cross Soldiers can has manifesto.