Let’s do the Kutasi! 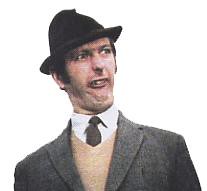 The recent media-storm-in-a-teacup regarding the sensational revelation that NSW Young Liberals aren’t exactly backwards-about-coming-forwards inre their attitudes towards women, queers and blacks prompted some ‘neo-con’ (statist reactionary) to leave a post on my blog:

“The ‘Racist, sexist, homophobic’ chant is a parody of the rhetoric the left use when describing Liberal students. Few actually consider themselves racist, sexist or homophobic.”

Which theme James the New Conservative elaborates on his blog, and to which the following (slightly reformulated) is a reply:

“They [the ABC] seem to be on a bit of a crusade [against the Tories].”

I’m unconvinced: the real crusade is currently being led by George II, with HoWARd — Patron Saint of the Young Liberals, and former President (1964/1965) of the NSW Branch — content to play the role of snivelling sidekick, and the Young Liberals his dysfunctional cheer squad. 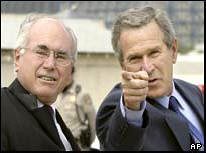 What’s interesting, I think, is the shift in power that has been established through the use of such practices; secondly, the implications this has for the future development of the Party and NSW state politics.

As for Imre… [whom James cites as providing proof of the ABC’s nefarious activities] there are two claims in the article (‘Liberals complain of ABC threats’, The Australian, July 13, 2006) which might constitute evidence of “thuggery and intimidation”. The first is an extract from the [Tory Party’s] letter of complaint [to the ABC]:

“The standard testimony from these members is that (the reporter) has used unwarranted demands of a subpoena to try and obtain an interview,” the letter says.

Which is definitely odd behaviour for a journalist. I mean, if I read the allegation correctly. (They’re alleged to have issued / threatened to issue demands to appear in court?) If so, this would presumably be considered unethical under the semi-mythical journalists’ code of ethics that Media Watch keeps tut-tutting at infractions of… again… and again… and again. Not to mention the law?

In any case, I think it would first need to be established that the journalist’s (alleged) conduct was as a result of their carrying out instructions from a superior before a conscious campaign of disembiggening of the Tories could be attributed to the ABC as a whole.

As for the second :

A former member of the Liberal Party, Kyle Kutasi, has made a statutory declaration claiming the reporter told him: “I know more about you than you could possibl[y] know. I have files on you. I have photos of you. I have statements from women saying that you assaulted them.”

What Salusinszky fails to mention is the fact that this cat called Katusi is not just ‘a former member’ of the Tories, but:

b) in April 2004, received “congratulations” from the NSW Young Liberals for being one of “our very vocal hecklers” at some daft debate with Young Labor;

c) if Salusinszky read the SMH, he might have read the following (July 1, ‘Party Animals’):

The most controversial accusation made by moderates is the use of “double agents” or “sleepers” by the conservatives – people who join the party, claim to have moderate views and become friends with moderates, while secretly working for the right and trying to take over branches.

One of those who has come under attack as a sleeper is Kyle Kutasi, who is engaged to Clarke’s daughter, Anne-Marie. Kutasi is said to have taken over three Young Liberal branches, including Newtown, by posing first as a moderate and bringing in friends. He denies the accusations but will not comment further, saying he has been burnt by journalists in the past.

In an interview two years ago, [Alex] Hawke told the Herald the double agent accusations were lies. He said people who were initially interested in the left had simply decided their views were better suited to the right. But Hawke also admitted he had embarked on a recruitment campaign.

“The Liberal Party now has a new young generation of members of talent and dedication to carry our party forward. Nicholas Campbell of our party’s State Executive, Alex Hawke, the new President of the Young Liberals, and his three vice-presidents Natasha McLaren, Anthony Orkin and KYLE KATUSI, are all in the vanguard of our party’s organisational wing. I take great pride in being a member of a party comprised of such good young people as these.”

e) he’s one of the principal villains of the piece.

But if it’s true that ABC employees aren’t “very fond” of the Tories, one could be forgiven for thinking that it’s got something to do with Tory Party policy.

For this reason — taking Liberal Party claims seriously, but without seriously investigating them — and for many others, Imre Salusinszky merits the term ‘hack’ far more than do the award-winning journalists at Four Corners.

“I doubt any actually consider themselves racist, sexist or homophobic, a point underscored by the fact that women, gays and people not of Anglo-Saxon background have been known to repeat the chant.”

What the young, self-declared ‘racist, sexist, homophobes’ consider themselves is surely beside the point. That is, if the students who did so say ‘sorry for the offence we acknowledge we caused through our insensitivity’, great. The point its use in the Lateline report underscores is not concerned with whether or not this chant is popular among “women, gays and people not of Anglo-Saxon background”, but the political shift in the Young Liberals to the (far) right it represents.

Finally, you’re ignoring the context of these remarks.

“Further, the God save the Queen performance was in many cases delivered by staunch republicans.”

Again, this is beside the point.

JOHN STEWART: In 2004, Aboriginal elder Ted Lovett opened the national student conference with a speech from the land’s traditional owners. He says that throughout his speech, Liberal students sang God Save the Queen.

TED LOVETT, BALLARAT COMMUNITY ELDER: I sort of, you know, I just sort of stopped dead and I let ’em finish their song and when they finished, I said, “alright you’ve had your national anthem,” I said, “I’ll give you mine”.

JOHN STEWART: The Aboriginal elder wants an apology and a guarantee that it won’t happen again at this year’s conference.

“It’s all about taking the piss out of the left, and seeing how angry we can make them. The Michael Moore-like editing doesn’t help the representation of ‘young liberals.'”

I’d have to watch it again before I compare the work of Vanessa Hughes and Jessica Tyrrell to Michael Moore (I expect they’d be flattered — he is kinda popular, after all!).

What it’s “about” you seem to think is the Young Liberals’ sole right to declare, which is, basically, ‘taking the piss out of lefties’. How does shouting at a conference that you’re racist, sexist and homophobic, or disrespecting Aboriginal elders achieve that? And why do you so easily allow the ‘left’ to be identified with opposition to bigotry? Do you really believe that opposition to racism, sexism and homophobia, and showing a modicum of respect for invited guests — who are simply being generous with their time — is confined to ‘leftists’?

All such antics demonstrate is that the Young Liberals are rude prats, with a stunning lack of imagination when it comes to taking the piss, and a really bad sense of humour. 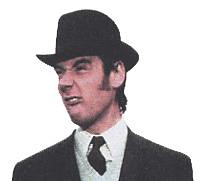 I live in Melbourne, Australia. I like anarchy. I don't like nazis. I enjoy eating pizza and drinking beer. I barrack for the greatest football team on Earth: Collingwood Magpies. The 2023 premiership's a cakewalk for the good old Collingwood.
View all posts by @ndy →
This entry was posted in Media, State / Politics, Student movement. Bookmark the permalink.

5 Responses to Let’s do the Kutasi!