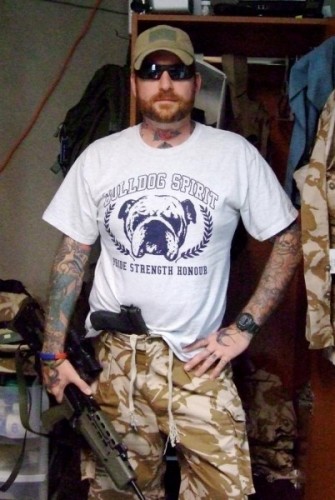 It’s been A Big Week for the neo-Nazi skinhead Hammerskins as one of the group’s members in the United States, Wade Michael Page, heroically shot dead six unarmed Sikhs before himself being shot dead by police.

The Hammerskins have quite a record for murderous violence and like many other Hammerskins, Page was a musician as well as a nazi, playing in bands (Blue Eyed Devils, Youngland) that have previously toured Down Under. His most recent musical projects, however, were Definite Hate and End Apathy. In 2010 a split 7″ by the two was released on Maryland-based bonehead Clemie Richard Haught’s (aka Rick Haught) label ‘Label 56’ (which conducted an interview — since deleted — with the dead nazi murderer in April 2010). The close relationship between the mass murdering Page and the entrepreneurial Haught has resulted in the label’s Facebook page being closed (its MySpace page remains up) and a statement from Haught seeking to distance his theory from Page’s practice.

Antifa in Philly, among others, are unconvinced.

Having celebrated (along with the nazis in Wade’s old band Youngland) its 20th birthday in Brisbane in April, the local Hammerskins franchise — aka the Southern Cross Hammerskins — will be holding its annual ‘Ian Stuart Donaldson’ memorial gig in Melbourne on Saturday, September 8. Playing at the gig will be Deaths Head/Ravenous (Melbourne) and Open Season (Brisbane). The SCHS’s most famous member is Kenneth Stewart (pictured above), who in March 2011 was revealed by The Age newspaper as running around Afghanistan with a gun, mourning the death of Nazi soldiers in WWII, and otherwise making himself useful as a mercenary, being employed by one of several Australian talent agencies that cater to the vast corporate war-machine which is making a killing — both literally and figuratively — in that part of the world.

Speaking of trash, the local Hammerskins sell their propaganda via online retailer 9% Productions. Among the many hundreds of products for sale on the site is an album by Hungarian boneheads Verszerzšdes, ‘Straight, Proud and True’. The album includes a tribute to the Hammerskins called ‘Crossed Hammers Banner’, a song featuring the talents of local nazi rock * Jesse (Deaths Head, Ravenous) as well as Wade’s comrade Brent from Definite Hate. Further, while Label 56 has decided to cave in to pressure from ZOG and withdrawn the 7″ from sale (the site does of course still offer a whole range of other neo-Nazi and White supremacist propaganda) the good news is that the musical masterpiece is available from 9% for the measly sum of $15. So too Wade’s efforts in the Definite Hate album Madder Than Hell. 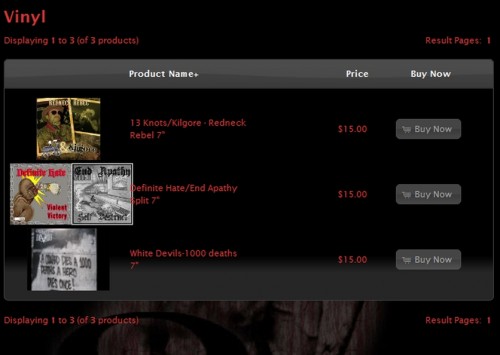 While a commitment to a virulently anti-Semitic form of ‘national socialism’ — and a concomitant opposition to race-mixin’, multi-culturalism and the like — might suggest an unwillingness or inability to play nicely with foreigners, nazis both now and then have quite adept at networking with their comrades from other countries. While Stormfront has become slightly moribund (I last surveyed the site back in 2008, and am unsure if doing so again is actually worthwhile) Facebook remains a worthy vehicle for these hateful passengers. (See also the hilarious Aboriginal memes page. Straya cunt!)

Following the ISD gig in September the Next Big Thing on the fascist calendar is the Sydney Forum (October 20/21). Although touted as being independent the Forum is largely the work of the Australia First Party. Its fuehrer, Dr Jim Saleam, is a lifelong fascist militant whose questionable racial and ethnic origins (if not his lengthy criminal record) means he sometimes assumes an awkward place among the far right but is begrudgingly accepted — even by the angriest of Aryans — on account of his undisputed commitment to the White nationalist cause. In recent years the Forum has witnessed some sporadic opposition but, for their part, Australian RSL Clubs continue to provide a forum for the Forum.

Whatever. In my humble opinion, the following presentation by The NeueGermania Zivilisation Movement sounds completely batshit and totally awesome:

The NeueGermania Zivilisation Movement is dedicated to the establishment of a sustainable, technologically Advanced, new civilisation for Odin’s Folk.

It is an application of the New Odinist League, a natural religion of our Indigenous Germanic peoples. We ask, why should our folk be slaves to the system that sets our demise, when we ourselves can build our own better future?

Our movement presents to the Sydney Forum that future – 24th ERA: Our New Civilisation. It will present with its two speakers this model ushering a future society that can be implaced without economic or political dependency on the System.

Super-community analysis, 3-D eco-village walkthrough and its current progress. This is a presentation all preservationists can utilise to our respective self-determination and offers a practical alternative in the current era of peril.

Of course, as well as exciting a small handful of local Greek/Australians, the success of Golden Dawn in Greece has given heart to a number of like-minded ladies and gentlemen Down Under, and Dr Jim will be explaining the significance of the rise in another feature presentation at the Forum. Golden Dawn’s success — and the rise of far-right movements elsewhere in Europe — has also provided an opportunity for local Trotskyists Trotskyites to organise public meetings on the subject, among them Socialist Alternative. Somewhat bizarrely, AF decided to send one of its members along to one such SAlt meeting (July 17) and their report has been published on Stormfront (as well as provided an opportunity for a small clutch of fascist bloggers to wring their hands over the pernicious influence of the dastardly Communists over The Nation’s yoof).

As for AF, it’s making a concerted effort to gain a seat on local councils this year, running candidates in Blacktown, Blue Mountains, Hawkesbury, Penrith, Sutherland and Wollondilly in the elections to be held on September 8. A win would be a breakthrough: the party enjoyed a very brief moment of success in 2006 when Bruce Preece was elected to Prospect council in Adelaide but celebrations were cut short when he left only a short while later.

In Penrith (East Ward) the party is standing Maurice Girotto, Michael William Saunders, Geoffrey Thomas Hutchin, Majorie Joan Thomson and Shaun Adams. In Sutherland (Ward A) Australia is First with Michael Chehoff & Co (Martin Augustine and Karl Glas) while in Wollondilly (North Ward) Australianism is being represented by James Carmody, Ray Smith and Gloria Watling: the trio will be battling 14 other candidates (all Independents) for just three Council seats. Chehoff has previously been a serial candidate for Australians Against Further Immigration (AAFI) in NSW state elections: in Ku-ring-gai in 1999 (0.94%), Fairfield in 2003 (2.27%) and Wollongong in 2007 (1.87%). 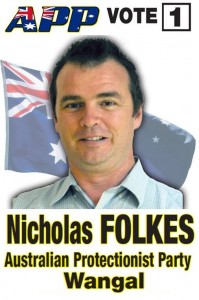 Competing with AF for the hearts and minds of White nationalists in Australia is the splinter group the Australian Protectionist Party. Its last major hurrah was a tiny rally it organised in Sydney in June. Following this utterly puny display the APP’s chief spokesperson (and former dildo salesman) Darrin Hodges announced his resignation from the party and, it seems, from political life altogether. Thus his website, previously used to house a torrent of anti-Muslim, anti-leftist and anti-multiculturalist rhetoric, has been completely wiped of this content and instead now contains Darrin’s thoughts on various software packages and the like. I can’t vouch for his technical expertise but I think this is probably an improvement.

Having exited stage right the scene has been set for another Sydney resident, Nicholas Hunter-Folkes, to mount the party platform. You may remember Nicholas from such TV shows as Dumb, Drunk & Racist. Nicholas is a house painter and will be badly losing in his attempt to enter Leichhardt council. Worse, Nicholas is the only APP member in NSW actually willing (or stoopid enough) to enter the political fray in this manner, the party’s appeal for other candidates falling on ears that are deaf (as well as bRanes what are dumb). 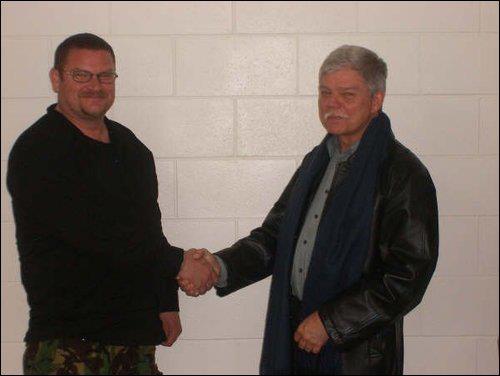 Across the water in Aotearoa/New Zealand, Kyle ‘The Pieman’ Chapman — a practicing Mormon (pictured above shaking hands with Dr Jim) and NZ’s answer to Mitt Romney — has been successfully gathering together the dregs of the White supremacist cause under the umbrella of ‘Right Wing Resistance New Zealand’ (RWRNZ). A former Hammerskin, despite (or perhaps even because of) his inability to write good, Kyle has nevertheless attained a degree of success in his latest organising project that appears to have eluded him during his previous outings as a National Front and Hammerskin organiser. Somewhat oddly, Kyle & Co not only make no secret but boast of their love of guns (see below) and preparations for a racial holy war on the North and South Islands: the apparent decision by authorities to handle him and his thugs with kid gloves not only constituting a stark contrast with the extraordinary efforts the state has gone to in order to criminalise radicals in that part of the world, but one which begs the question as to the precise nature of the relationship between them… 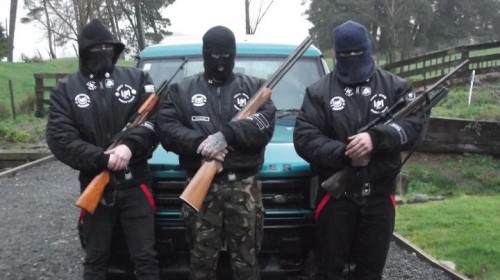 I live in Melbourne, Australia. I like anarchy. I don't like nazis. I enjoy eating pizza and drinking beer. I barrack for the greatest football team on Earth: Collingwood Magpies. The 2023 premiership's a cakewalk for the good old Collingwood.
View all posts by @ndy →
This entry was posted in Anti-fascism and tagged 2012 Sydney Forum, antifa notes, Australia First Party, Australian Protectionist Party, Right Wing Resistance New Zealand, Southern Cross Hammerskins, Sydney Forum. Bookmark the permalink.