Nazis enjoy the sun at the State Library of Victoria

Update (September 24, 2012) : stuff has a good headline — Nazi, Muslim, atheist spat in Melbourne — but best goes to Vice with Worst Riot Ever (Toby Fehily). And I didn’t realise this but according to The Australian the Australian Pathetic Party declared that on Sunday it was gonna rock the foundations of NSW parliament in protest at the prevalence of Muslamic ray guns on public transport (or some shit) but simply failed to show… 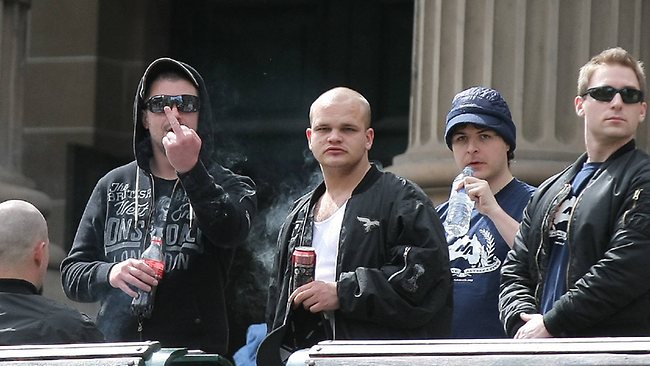 A handful of neo-Nazis and some other White racial patriots attended the State Library today in order to prevent local Muslims from waging jihad on bad television.

Numbering, it appears, no more than 10 or maybe 20, The Age (Police warning over cancelled Islamic rally, September 23, 2012) reports that the tiny mob denied having any political affiliation:

“The group of men, some of them wearing T-shirts bearing SS insignia and some with shaved heads, denied being part of any organisation.

They said they had come to the Victorian State Library to enjoy the sunshine.”

Apart from being rather amusing, this response is also rather disingenuous. Thus the t-shirts — as photographed by news.com.au — contain images of the logo of ‘Nationalist Alternative’, a tiny neo-Nazi grouplet from Melbourne. Notably, one of NAlt’s very first forays into local politics took place in Williamstown in 2008, when the group allied itself with locals in order to oppose the construction of a mosque. In general, however, NAlt may be viewed as the successor organisation to Dr Jim Saleam’s ‘National Action’. Of course (after a spell in prison for trying to terrorise an opponent) Saleam is now the leader of the Australia First Party, which earlier this month won a place on Penrith council. As for NAlt Saleam has previously dismissed them as a bunch of students from Melbourne; on the other hand, Dr Jim also referred to the Hammerkins — which gained some fame last month after one of its members shot dead six Sikhs at a temple in Wisconsin — as merely the organisers of musical events for young people… though these ugly faces don’t appear to be very studious. Secondly, the man on the right bears an uncanny resemblance to local neo-Nazi organiser Jack/Gareth Sansom — whose political perspective is straightforwardly and unapologetically nazi — and there were a small number of other known faces in attendance. In summary, then, apart from the handful of older neo-Nazis, the small crowd appears to have mostly consisted of flag-waving White teenyboppers — the dregs of the Southern Cross Soldiers, perhaps, or some other, more recent derivation — alongside a handful of elderly atheists. The Herald Sun has published a gallery of images of the teenage soldiers and the atheists here.

I live in Melbourne, Australia. I like anarchy. I don't like nazis. I enjoy eating pizza and drinking beer. I barrack for the greatest football team on Earth: Collingwood Magpies. The 2023 premiership's a cakewalk for the good old Collingwood.
View all posts by @ndy →
This entry was posted in Anti-fascism, State / Politics and tagged Gareth Sansom, Jack Sansom, Nationalist Alternative. Bookmark the permalink.