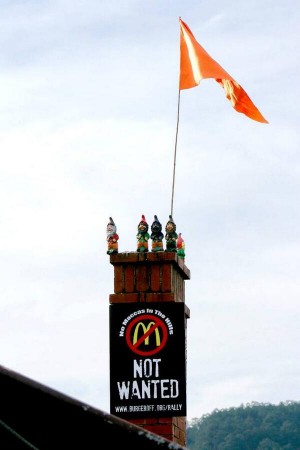 The struggle to save Tecoma and the Dandenongs from colonisation by US fast-food chain McDonald’s appears to be entering its final phase. Earlier in the week McDonald’s mobilised VicPol and private security against locals to evict them from the site of the proposed new franchise (the first of its kind in the area). The state is obviously McHappy to assist the fast-food corporation to do Whatever It Takes to colonise the hills surrounding Melbourne. Ironically, last week the Guardian exposed the fact that UK police employed an undercover agent, Bob Lambert, to infiltrate the campaign against McDonald’s by London Greenpeace, during which time he helped to co-author the famous McLibel leaflet. The campaign was also the subject of a great documentary, produced by Spanner Films.

In the latest development, members of the CFMEU working on the project have withdrawn from the site in solidarity with locals. This is a positive thing, and arguably reflects both an honourable tradition on the part of unionists and a recognition of the importance of community support for union struggles: and union support for community struggles. The fact that VCAT “gave McDonald’s the green light to open a 24-hour restaurant in the small town despite opposition from the local council and, according to a door-knock survey, more than 92 per cent of the community” suggests that the community certainly can’t rely on the democratic state for assistance.

I live in Melbourne, Australia. I like anarchy. I don't like nazis. I enjoy eating pizza and drinking beer. I barrack for the greatest football team on Earth: Collingwood Magpies. The 2021 premiership's a cakewalk for the good old Collingwood.
View all posts by @ndy →
This entry was posted in Broken Windows, State / Politics, That's Capitalism! and tagged CFMEU, McDonald's, Tecoma. Bookmark the permalink.