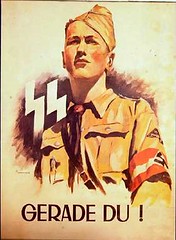 NS&SP Mayor Robert Bria said a group known as “White Pride World Wide” [?] had been distributing the posters through-out the Campbelltown area and he last week saw one on a bus stop at Glynde.

According to the posters, the group has links with US-based extreme right wing website Stormfront.

The website, among other things, supported Mel Gibson’s drunken anti-Jew rantings in Malibu last week, accused Jews in Rome of defacing their own shops with swastikas, accused African-Americans of faking hate crimes and even offered a “kids page” for young white supremacists.

“There is no place for racism in Australian society,” he said.

“We will not tolerate that sort of behaviour in Campbelltown,” he said.

“We’re a very multicultural city and we’re very proud of it – I was just mortified when I heard about this.”

Hartley (ALP) MP Grace Portolesi said she was made aware by a resident of several posters on phone booths along Lower North East and Clairville roads, Campbelltown. She has asked the SA Multicultural and Ethnic Affairs Commission to report on the issue.

Norwood Police acting Sen-Sgt Margaret Action said late last week the matter was being investigated but she could not at that stage give details of how many posters there were.

“A lot of them were taken down by the public,” she said. “We are putting together our intelligence on the matter and certainly investigations are being made into the persons that are responsible.”

Acting Sen-Sgt Action said police would deal with the matter under the Summary Offences Act, which includes up to three months imprisonment for anyone found guilty.