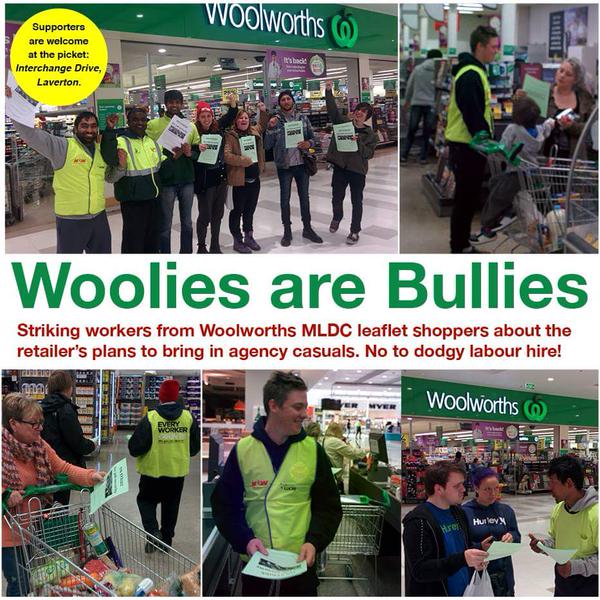 Workers at the Woolworths distribution centre in Laverton (40-58 Leakes Rd) are on strike. The strike began on Sunday night/Monday morning (August 9/10) and a picket has been in place since that date. See : Woolworths Laverton workers strike over labour hire casualisation, Nick Toscano, The Age, August 10, 2015 | Workers defy legal orders and continue Woolworths liquor warehouse blockade, Nick Toscano, The Age, August 11, 2015.

The demands of the striking workers are reasonably straightforward:
1) Woolworths adhere to a previous agreement that it will not employ labour hire workers @ MLDC and;
2) There is to be no retribution on striking workers.
See : Indefinite strike at Woolworths warehouse over labour hire, Sue Bolton, Green Left Weekly, August 11, 2015 | ‘Nothing in, nothing out’ at Woolworths picket, Steph Price, Red Flag, August 11, 2015.

mAAAAAAd props to the workers at the MLDC for taking action in defence of their rights and in resisting the increasing casualisation of the workforce. Support from the community is welcome at the picket so if you can, pop down to 40-58 Leakes Road, Laverton and say g’day!

I live in Melbourne, Australia. I like anarchy. I don't like nazis. I enjoy eating pizza and drinking beer. I barrack for the greatest football team on Earth: Collingwood Magpies. The 2021 premiership's a cakewalk for the good old Collingwood.
View all posts by @ndy →
This entry was posted in State / Politics, That's Capitalism! and tagged Laverton, Melbourne, MLDC, National Union of Workers, NUW, picket, strike, Woolworths, Woolworths Melbourne Liquor DC. Bookmark the permalink.