This Saturday, November 5, a small group of people from Sydney, Bendigo, Melton and Melbourne will be descending upon St Andrew Park in Eltham in order to engage in what the organisers of the rally, the Sydney-based micro-sect ‘Party For Freedom’, are referring to as “The Battle Of Eltham”. The ‘Battle’ is to stop St Vincent’s Care Services in Eltham from providing housing to a number of Iraqi and Syrian refugees, a joint project of St Vincent’s Health Australia and CatholicCare. According to St Vincent’s, the proposal is intended:

… to help settle and support vulnerable refugees from Syria and Iraq – with priority given to women and children.

The refugees will be provided with medium-term rental accommodation in 60 units on the site of St Vincent’s Care Services Eltham. These units are stand-alone and separate from the residential aged care and independent living facilities on site.

The 60 units have been vacant for a number of years and have been refurbished by St Vincent’s Care Services to make them liveable.

The refugee housing project will run for two years and then the accommodation will be transitioned to be used as affordable housing for seniors.

There will be no impact on the residential aged care or independent living residents who live at the Eltham site.

You can read more about the project on the fact sheet (October 5, 2016) St Vincent’s has provided here.

In any case, while St Vincent’s claims that ‘We bring God’s love to those in need through the healing ministry of Jesus’, others, including the Party For Freedom, Soldiers Of Odin, True Blue Crew and United Patriots Front, have other ideas. Thus according to the PFF, in its promotional material for the ‘Battle’, ‘the decision to house the refo invaders in an aged care facility is a slap in the face of locals’, and those who support the proposal are ‘deranged and irresponsible advocates for open borders’. Further, ‘both major parties are working together to destroy Australia by using taxpayers’ money to facilitate the third world colonisation of Australia’: a dastardly plot which now implicates the Christian charities St Vincent’s and CatholicCare. Of course, the PFF also advocates the forcible sterilisation of refugees from the ‘Third World’, and is otherwise infamous for staging an invasion of a church service in Gosford (August 2016) and for attempting to stage a recreation of ‘The Battle of Cronulla’ (December 2015). 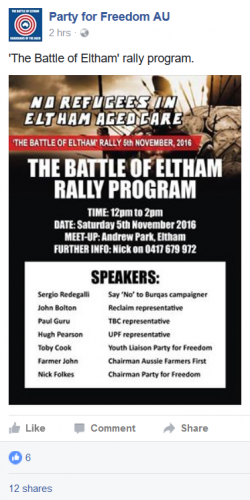 Those scheduled to speak at St Andrew Park as part of the ‘Battle’ are all familiar faces on the far right. Thus in addition to PFF Chairman Nick Folkes and his teenybopper sidekick Toby Cook, Sydney-based anti-Muslim activist Sergio Redegalli, ex-Australian Liberty Alliance candidate John Bolton of Adelaide, and local boys Paul ‘Guru’ Franzi (True Blue Crew), Julian de Ross (AKA ‘Hugh Pearson’, United Patriots Front) and John Wilkinson (AKA ‘Farma John’) will all be delighting the crowds with their verbal wit. One person who won’t be joining the patriotik mob will be Phillip Galea, currently a resident at Thomas Embling hospital, but otherwise on trial for alleged terrorist offences. A friend of Reclaim Australia, the TBC and the UPF, Galea’s previous legal entanglements revolved around Wilkinson’s alleged provision to him of a number of cattle prods; Wilkinson was also one of those who participated in the UPF dummy stunt in Bendigo in October last year, though has escaped facing any charges. Not so lucky are UPF fuehrer Blair Cottrell and former UPF members Neil Erikson and Chris Shortis (now a member of the White nationalist Australia First Party): they are due to face court in March next year.

The fascist plan to grunt and squeal in St Andrew Park has also resulted in the organisation of some other activities by Diamond Yarra Valley Resistance Solidarity on Saturday morning. Titled SAFE – Stand Against Fascism in Eltham, the DYVRS day begins at 10am. In which context, it’s worthwhile noting that this is NOT a counter-rally and DYVRS is seeking to avoid any and all confrontation on the day. DYVRS:

DYVRS is staunchly antifascist, and firmly believes that hatred and bigotry on our streets should be shut down. In this instance though, due to circumstance and location, direct opposition to thugs and bigots is not a workable tactic.

If your desire is to shout at and engage with right wing undesirables, while in other circumstances we might agree, in this case we must respectfully ask you not join us on the day. We cannot emphasise this enough – this is a peaceful protest aimed at avoiding conflict. There is much at stake in this issue and no one to profit from conflict but the groups we oppose.

Note that further details on the day’s events (which are scheduled to finish at 1pm, ie, before the fascist rally ends at 2pm) may be found by checking the DYVRS Facebook event page on Friday night. Just a reminder the first stop on Saturday’s event at 10am is a very long way from the shouty asshats and is in an easily secured location. You are most welcome to just attend that part if you’d like. This stop will have the speeches and the banner drop. Afterwards we’ll be moving a little closer to their group but not in contact and if you’d prefer not to do that, that’s fine too. See you Saturday – remember to check for maps and further instructions on Friday on this page or Twitter.

As always, much love and respect to all the good folk taking a stand against racism and bigotry — see you on the streets!