UPDATE (June 6, 2017) : As expected, Zakhariev has been found guilty of ‘training with a Kalashnikov with the intention of carrying out a terror attack’ and sentenced to four years in jail (Australian-Bulgarian John Zakhariev sentenced for terrorism, Nick Miller, The Age, June 6, 2017). 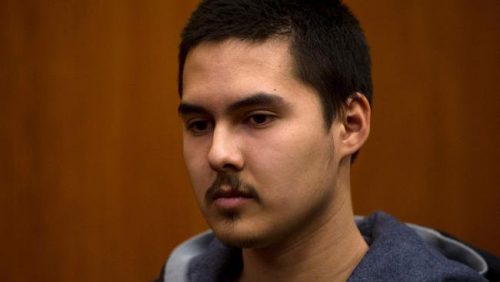 John Zakhariev (above) is a 21yo dual Australian-Bulgarian citizen currently on trial in Sofia, Bulgaria. Arrested in September 2016, John is accused of undertaking weapons training in Bulgaria in order to join Daesh in Syria. He denies all charges.

I was recently forwarded the following letter from John which I reproduce below:

Since the 20th of September 2016 I have been stripped of my liberty and locked up in the heart of darkness otherwise known as Sofia Central Prison. The reason being that the Bulgarian authorities allege that I came to this country in order to train with firearms in order to fight with Islamic State or Daesh. To date, after nearly seven months, neither me nor my lawyer have seen or been presented with any evidence by the prosecution to back up these absurd allegations. One would expect that there would be a huge burden of proof on the part of the prosecution to back up her claims, which she herself has proudly boasted in court is ‘irrefutable’. Yet to date all that the court has been presented with in terms of evidence are as follows:

Firstly, workers from the legal shooting range I attended in Sofia (four times over a four week period), who all testified that my behaviour was perfectly normal and that they never had any issues with me as a client. Furthermore they all testified that I stopped attending the shooting range in early August 2016. This is in complete contrast to the claims of the prosecutor that I continued to attend until the 19th of September. Other witnesses to testify include a police provocateur who was sent to befriend me at the Banya Bashi Mosque in Sofia, Muhammad Dabbousi. In his witness statement he claimed that I said to him that I love Daesh and that me and him have to go and fight alongside them and yet in court he claimed that I was merely talking about them in a neutral manner. He made no mention of the alleged attempted recruitment or anything about me saying that I love them. He even expressed shock when the judge presented him with his original witness statement, leading me to believe that the police wrote his statement for him and asked him to sign it without even looking at it: an all-too-common practice here in Bulgaria with its law enforcement. At this point I wish to note that all the witnesses from the shooting range testified that I was always accompanied by a man to the shooting range. I never went alone. I knew this man as Peter Petrov, who I strongly suspect was a police agent.

Secondly, the prosecution presented to the court statuses which people on my Facebook friends list wrote about the ongoing war in Syria which was pro-opposition in nature. I will now make a point here which is that I never commented, shared or even liked these statuses, nor have I ever corresponded with the individuals who wrote them. The prosecution has further sought to use religious books on my computer as evidence of my support for Daesh even though a court-appointed expert himself testified that the books, though conservative in nature, do not in any way promote violence and cannot be linked to the ideology of ISIS. In my view this further shows the sheer Islamophobia of the case against me where anything even remotely connected to Islam is labelled extremist or jihadist. Yet even more disturbing for me is the court’s unwillingness to allow my defence to present any evidence in my favour. On the 21st of December I told the court that I had already left Islam months before my arrest. I further told the court evidence which could be found to support my claims including a 12 page email I sent to Canadian ex-Muslim Abdullah Sameer titled ‘Notes on Islam’ where I point out several flaws in the Islamic faith and also its claims of being a perfect faith valid for all times and places. I also told the court about some anti-radical Islamic literature which could be found on my computer and which were all downloaded in the same period beginning in early August ’til my arrest on September 20th. I also informed the court about emails I wrote to the Canadian Tourism College and International Guide Academy in Denver, Colorado enquiring about courses available in 2017, which clearly show my intention to continue my studies and not to join ISIS. And finally I told the judge that my Facebook correspondence would prove that I am indeed anti-ISIS since I spent a lot of time on it refuting the ideology of ISIS to its supporters. I even told the judge that I was also in touch with ex-Muslims weeks before my arrest discussing the possibility of setting up a Council of ex-Muslims in Australia similar to the one in the UK. The judge ordered that all this evidence be gathered, which raised my hopes of receiving a fair trial. Yet on May 16th 2017 when after many delays all this evidence had been gathered and presented to the court, the judge suddenly did a 360 and refused to even look at the evidence and calling the request of my lawyer to examine the Facebook correspondence, emails and for an examination of the books ‘groundless’ and ‘unnecessary’ since there was already enough evidence gathered by the prosecution seemingly ignoring the fact that they only ever sought evidence which would support their case.

This decision by the court confirms my fears since day one of my arrest that I would be subjected to a show trial and denied a fair hearing. I have resigned myself to the fact that I will be found guilty even though I will always maintain my innocence and insist that I was the victim of a poorly-attempted entrapment operation, whose pathetic nature would be almost laughable if its consequences weren’t so serious.

I live in Melbourne, Australia. I like anarchy. I don't like nazis. I enjoy eating pizza and drinking beer. I barrack for the greatest football team on Earth: Collingwood Magpies. The 2021 premiership's a cakewalk for the good old Collingwood.
View all posts by @ndy →
This entry was posted in State / Politics, War on Terror and tagged Abdullah Sameer, Bulgaria, Bulgarian Prisoners' Association, Bulgarian Prisoners' Rehabilitation Association, Daesh, Facebook, ISIL, ISIS, Islamic State, John Zakhariev, Syria. Bookmark the permalink.