This Friday, the racist methgoblins of the True Blue Crew, in conjunction with the neo-Nazi remnants of the United Patriots Front now known as ‘The Lads Society’, are holding a rally and BBQ at St Kilda Beach. This is both a patriotik event and, perhaps, a response to recent news that #AfricanGangs have been running amok. The fact that Romper Stomper also featured a similar party at the beach is no doubt a coincidence. In any event, joining the boys will be Neil Erikson and ‘Patriot Blue’ (see Romper Stomper); or at least, that’s what The Australian reckons:

A Victorian far-right activist has defended his plans to disrupt a citizenship ceremony at an anti-Australia Day local council.

Neil Erikson says he and other members of his group Patriot Blue would be counter-protesting Moreland City Council, which voted last year to scrap Australia Day.

“We’re not here to scare anyone, we’re peaceful … we want to welcome the new citizens at Moreland City Council to know it’s not just January 26, it’s Australia Day,” he told The Australian.

“And to know that the councillors are a bunch of undemocratic, treasonous communists.”

Mr Erikson, a former neo-Nazi, also said he will attend an Invasion Day rally in Melbourne’s CBD on Friday where he and Patriot Blue members will counter-protest with Australian flags.

“If the violent left want to attack us, that’s on them … we expect the police to protect us and protect Australia Day.”

Thousands of people, including children, are expected at Friday’s rally where they will demand [sic] Australia Day’s date is changed from January 26, which they consider offensive to Aboriginal people as it is the anniversary of the First Fleet and the start of colonialism.

It was revealed last week in the Federal Circuit Court Mr Erikson had recently been charged with assault, affray and riotous behaviour in regards to a riot outside far-right commentator Milo Yiannopoulos’s Melbourne speaking gig last month.

Moreland City Council was targeted by a group including Mr Erikson last October for its decision to support a change to Australia Day’s date, when far-right protesters crashed a council meeting and brandished a fake coffin with the national flag painted on it.

But the council has only received a formal warning from the federal government over their anti-Australia Day stance unlike Yarra and Darebin Councils which had their citizenship ceremonies cancelled.

Sources close to the council said they had expected to fly under the radar of far right activists on Friday as their citizenship event clashed directly with the Invasion Day rally.

Mayor John Kavanagh said Moreland City has updated its security arrangements and had been working with Victoria Police in the run up to their Friday citizenship ceremony.

“It would be incredibly disappointing if such a joyous occasion was tarnished by individuals or groups protesting something unrelated to the ceremony,” he said.

Invasion Day rally organiser Tarneen Onus-Williams told The Australian she did not fear for the safety of her fellow protesters due to the large police presence she expects to be in the CBD on Friday.

“We also have legal observers and human rights observers coming who will be keeping watch over the rally,” she said.

Ms Onus-Williams said any violence would be a result of the “far right protesting against us.”

“This is a family event and people often bring children, our nieces and nephews and little cousins are there. This is not a violent protest,” she said.

Victoria Police told The Australian protesters and other Melburnians would note an “increased police presence” on Australia Day this year.

“Extensive planning has been undertaken with all relevant stakeholders including local councils … As always, police will not tolerate any anti-social or criminal behaviour,” a police spokesman said.

Note that Neil was angwy and upset at the popularity of last year’s Invasion Day rally in Melbourne, wishing that alleged killer James Gargasoulas — ‘accused of driving a car through the busy Bourke Street mall and along the footpath for several blocks on January 20, hitting and killing six people and injuring many others’ — had driven his car into the crowd: 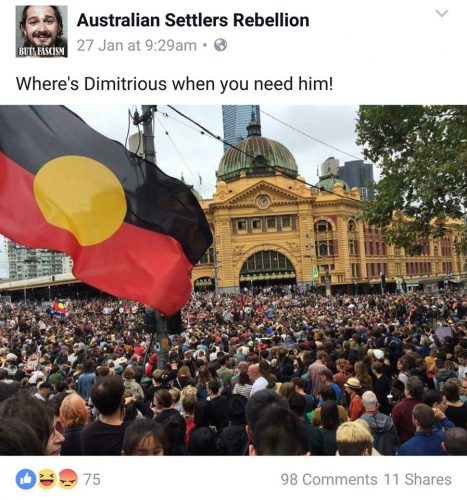 • Along with Neil, Garry Hume, Ricky/Rikki Turner and Richard Whelan of ‘Patriot Blue’ are also facing charges in connection to the MILO stoopid of December last year;
• Both Garry (in blue jumpsuit) and Ricky/Rikki joined Neil in disrupting the Moreland Council meeting in October last year.

2018 marks the 80th anniversary of the ‘Day of Mourning’: ‘a protest held by Aboriginal Australians on 26 January 1938, the sesquicentenary of British colonisation of Australia’.

Welcome To Country details a range of activities on January 26 in Melbourne, Meanjin (Brisbane), Sydney, Perth, Canberra, Adelaide, Darwin, Townsville, Hobart, Lismore and Bermagui; you can also celebrate Survival Day in Belgrave. The Melbourne (Naarm) event kicks off with a rally at 11am at Parliament; supporters are asked to bring flowers to lay on the steps if they’re so inclined. The Balit Narrun Festival commences at 1pm in Treasury Gardens. According to organisers, the ‘artistic direction for 2018 is about ‘strength in culture’ with the Songlines changing the name of the festival to Balit Narrun (Strong Spirit). Balit Narrun will feature cultural art, music, dance. It is family friendly, and will have food and children’s activities available’. See also : Survival Day events around Australia – What, When and Where?, NITV, January 23, 2018. 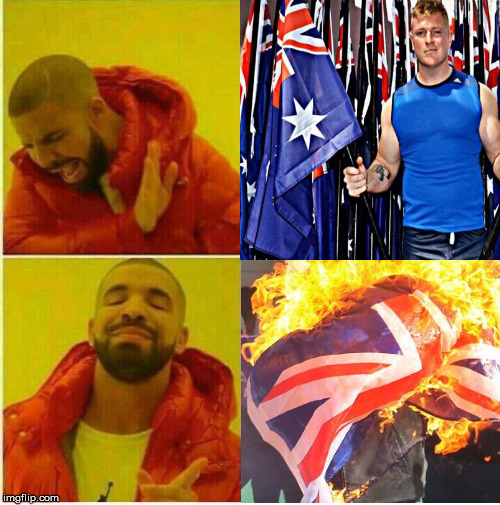 Finally, a note on history by way of Robert Hughes (The Fatal Shore: The Epic of Australia’s Founding, 1986):

• The proposal to colonize Botany Bay with convicts was formally drawn up in an unsigned document titled “Heads of a Plan for effectually disposing of convicts” and was presented to the British cabinet in August 1786. Its emphasis was clear: The proposed colony would serve as “a remedy for the evils likely to result from the late alarming and numerous increase of felons in this country, and more particularly in the metropolis.” The secondary benefit of the region’s raw materials was presented at the end of the document: “It may also be proper to attend to the possibility of procuring… masts and ships’ timber for the use of our fleets in India, as the distance between the two countries is not greater than between Great Britain and America…”

• By 1837, hanging was mainly restricted to cases of murder, while crime after crime — forgery, cattle-theft, housebreaking — was relegated to the less terrible and magical status of a “transportable” offense. Slowly, the English authorities acknowledged the mistakes and fantasies that had led their predecessors to fetishize the death penalty. But the real rise of transportation began, not with the law itself, but with its new enforcers: the “peelers,” the English police, established by Sir Robert Peel in 1827 [see also : Origins of the police, David Whitehouse, worxintheory, December 7, 2014]. A police force meant a huge rise, not in gross crime, but in successful arrests and convictions. Likewise, the abandonment of transportation was not caused by any fall in crime, but by three other factors: the growing moral and political opposition to the System of transportation among English reformers in the 1830s, the growth of an alternative English penitentiary system and the Australians’ own opposition to a continuous dumping of fresh criminals on what, after 50 years of settlement, they had come to view as their own soil.

• In their most sanguine moments, the authorities hoped that Australia would eventually swallow a whole class — the “criminal class,” whose existence was one of the prime sociological beliefs of late Georgian and early Victorian England. Australia was settled to defend English property not from the frog-eating invader across the Channel but from the marauder within. English lawmakers wished not only to get rid of the “criminal class” but if possible to forget about it. Australia was a cloaca, invisible, its contents filthy and unnameable. Jeremy Bentham, inveighing against the “thief-colony” in 1812, argued that transportation: “…was indeed a measure of experiment… but the subject-matter of experiment was, in this case, a peculiarly commodious one; a set of animae viles, a sort of excrementitious mass, that could be projected, and accordingly was projected — projected, and as it should seem purposely — as far out of sight as possible.”

4 Responses to From Cronulla to St Kilda? Australia/Invasion/Survival Day 2018