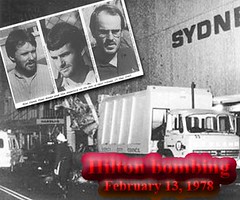 AUSTRALIA’S top spy has warned of possible violent protests and terrorist attacks at next year’s APEC summit of world leaders in Sydney.

“Certainly, in the context of the APEC meetings and events we can expect to see large-scale protests on a range of issues, including anti-globalisation, the environment and climate change, the Iraq war and a number of other matters,” Mr O’Sullivan said.

“While the threat of protest action in connection with APEC is certain … there is also an overarching and persistent threat of terrorism which inevitably has an impact in the conduct of events such as APEC, either in general or directed at some of the individual leaders.”

Mr O’Sullivan said ASIO was expected to carry out 30,000 accreditation checks for APEC as part of attempts to keep trouble makers out of Australia.

“There are individuals in Australia, and some who have sought to come here from overseas, who are not prepared to limit their protest activities to those that are lawful and peaceful,” Mr O’Sullivan said.

This is presumably a coy reference to Scott Parkin, arrested on September 10 and deported on September 15 last year on the basis of an ASIO assessment designating him a ‘national security risk’. The authorities are currently appealing his successful application to the courts for his assessment (marked ‘Top Secret’) to be released.

Curiously, portions of this assessment were made available to sections of the Australian media — well, if Greg Sheridan may be considered a journalist rather than a vulgar propagandist — at the time of his deportation: ‘Deported activist was to teach tactics of violence’ screamed the front-page headline (September 22, 2005). The Australian‘s Foreign Editor, Greg Sheridan, and co-author, John Kerin, reported claims from anonymous intelligence sources that Parkin’s civil disobedience training was “likely to increase violence” at demonstrations.

This is not the first time Sheridan has breathlessly reported spin from an intelligence source. On July 12, 2003, he wrote that “well-informed sources” told him U.S. troops had discovered what they believed to be “decisive proof of Iraq’s weapons of mass destruction programs”. And Sheridan is, of course, well-known as an apologist for Suharto’s genocidal regime.

A few years prior to Parkins’ deportation, another US activist, Doyle Canning, was denied entry to Australia. In July 2002, Canning was informed by the Australian Embassy in Washington that she had been denied a visitor’s visa because she did not pass a “Character Test”. Section 501 (“Refusal or cancellation of visa on character grounds”) of the Migration Act defines the ‘Character Test’ in this manner:

(6) For the purposes of this section, a person does not pass the character test if:

(a) the person has a substantial criminal record (as defined by subsection (7)); or

(b) the person has or has had an association with someone else, or with a group or organisation, whom the Minister reasonably suspects has been or is involved in criminal conduct; or

(c) having regard to either or both of the following:

(i) the person’s past and present criminal conduct;

(ii) the person’s past and present general conduct;

the person is not of good character; or

(d) in the event the person were allowed to enter or to remain in Australia, there is a significant risk that the person would:

(i) engage in criminal conduct in Australia; or

(ii) harass, molest, intimidate or stalk another person in Australia; or

(iii) vilify a segment of the Australian community; or

(iv) incite discord in the Australian community or in a segment of that community; or

(v) represent a danger to the Australian community or to a segment of that community, whether by way of being liable to become involved in activities that are disruptive to, or in violence threatening harm to, that community or segment, or in any other way.

“These individuals and groups actually plan for violent protest and seek to develop tactics that will bring them into conflict with police and other authorities.

“They also seek to involve others in their activities with a view to causing widespread disruption and havoc to events or individuals whose views they oppose.”

Mr O’Sullivan said recent violence at the G20 protests in Melbourne were a good guide to the sorts of protests APEC was likely to spark.

He said there were about 70 individuals who sought to use the lawful G20 protests to engage in violent acts and confrontations with police.

“As they are identified they will be charged with a range of criminal offences and will be dealt with through the legal system,” Mr O’Sullivan said.

He said that where ASIO had any specific and credible information about a potential terrorist attack it would communicate details to the public “in a timely and appropriate manner”.

“On the 13th of February 1978 at 12:40 am, a massive bomb which had been placed in the rubbish bin outside the Sydney Hilton Hotel exploded, devastating a whole city block. Three people were killed and seven seriously injured. The noise of the explosion could be heard as far way as Bondi Beach. At the time, the Australian Prime Minister [Eminent Person Malcolm Fraser] and eleven visiting heads of state were resident in the Hilton Hotel. Right from the beginning the police said it was a terrorist conspiracy. They claimed the Ananda Marga religious sect was responsible. But for ten years, no person or group claimed responsibility, and the police by their own admission could find no evidence — not even enough to question anybody. At the same time, former police constable Terry Griffiths, a victim of the bomb blast, campaigned for a full and open inquiry. While recovering from his horrific injuries Griffiths received information which alleged it was the security forces themselves who were responsible for the blast, part of a sinister official conspiracy.

Through a series of stylised re-enactments and studio interviews Conspiracy tells the gripping and dramatic story of the Sydney Hilton Hotel bombing. A huge security operation had been mounted for what was the first Commonwealth Heads of Government Regional Meeting and yet the bombers somehow slipped through the cordon. Was the bomb itself made in a commonwealth government laboratory? Was a bomb disposal unit waiting nearby as part of a pre-arranged plan? Why were the Army bomb sniffer dogs called off just a few days before? Was there a police observation vehicle watching the hotel and did someone from that vehicle make the bomb warning call? Why were almost all of the bomb fragments simply swept up and thrown away? And why was a rubbish bin in a high security area left unchecked and unguarded?”

The spy agency is working with other federal agencies, state police and foreign intelligence agencies to weed out [?] trouble-makers… ahead of the meeting.

Prime Minister John HoWARd and NSW Premier Morris Iemma have both warned APEC will be a very big security concern.

Security for the event will cost Australian taxpayers a staggering $143 million, with the entire cost of the event estimated at more than $300 million.

But honestly, who gives a shit?

I live in Melbourne, Australia. I like anarchy. I don't like nazis. I enjoy eating pizza and drinking beer. I barrack for the greatest football team on Earth: Collingwood Magpies. The 2023 premiership's a cakewalk for the good old Collingwood.
View all posts by @ndy →
This entry was posted in !nataS, History, Media, State / Politics, War on Terror. Bookmark the permalink.