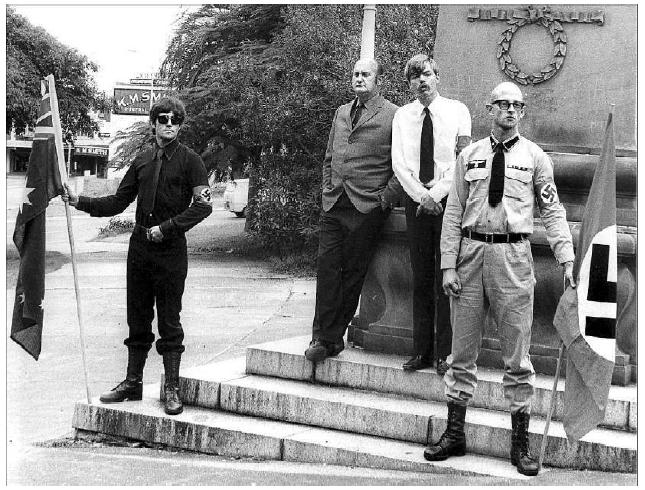 The Sydney Forum is the No.2 forum on the fascist calender in Australia. So if you’re truly interested in hearing James ‘110% White’ Saleam, Andrew ‘Gentlemen Prefer Blondes’ Fraser, John ‘911 Was An Inside Job!’ Bursill, Terrie-Anne ‘Fuck Off We’re Full’ Verney, David Astin and a handful of others prattle on about Race & Nation and many, many other issues — all under the watchful eye of Herr Welf Herfurth — BOOK A TICKET NOW.

All enquiries in relation to the Sydney Forum should be directed in the first instance to:

And don’t forget ‘Day Two’ volk, as this is the more casual, uninformed, un-uniformed assembly, that allows White Nationalists from around Australia to swap ideas and form important alliances — all in a site of great historical importance to the volk.

Excerpt from Leviathan by John Birmingham, about a bunch of violent nutters in the ’80s, including a deserving case who comes to a sticky end:

On 20 April 1991 — Adolf’s birthday… — National Action member Perry Whitehouse gunned down fellow member Wayne ‘Bovver’ Smith at the National Action headquarters. What Whitehouse didn’t know, as he closed the hand of his bullet-riddled former comrade around a knife to make it look like self-defence, was that ASIO had bugged the place, and the whole sorry affair was down on tape.

Smith : What’s it say?
Whitehouse: Ask him, mate. Just ask him. He’s…
Smith : You’re the one that’s fuckin’ sayin’ this.
Whitehouse : Just wait here. Footsteps. I’ll show what I got to say.
Smith : All right.
Music. Pause in conversation. Six sharp noises in succession. Distinct sound similar to a gun being fired. Crashing sounds. Music.
Whitehouse : That’s what I got to fuckin’ say, you fuckin’ cunt.
Another member, Gregory Jorgensen, then speaks. His words are inaudible.
Whitehouse : I just killed the prick. You wanna know. Yeah, you wanna fuckin’ know. What’ya wanna know… to kill you too… I just shot the fuckin’ prick. Right. I just shot the cunt. Wanna know.
Music stops.
Whitehouse : Because he’s a fuckin’ arsehole, that’s why I shot him. Right. Do you think I’m fuckin’ scared of fuckin’ goin’ to jail. I don’t give a fuck. I’m not scared. Right. I shot the cunt dead. That’s what it’s all about boy, that’s what it’s all about, right. You ain’t got the guts to fuckin’ face up to that, you’re fuckin’ weak as piss. Right, he’s fuckin’ dead. Now we gotta get rid of that body or I’m gonna get rid of the fuckin’ body, right.
A gasp is heard.
Whitehouse : Shut up, ya fuckin’ prick.

Hope to see you all there kameraden!

I live in Melbourne, Australia. I like anarchy. I don't like nazis. I enjoy eating pizza and drinking beer. I barrack for the greatest football team on Earth: Collingwood Magpies. The 2021 premiership's a cakewalk for the good old Collingwood.
View all posts by @ndy →
This entry was posted in !nataS, Anti-fascism, Broken Windows, Death, History and tagged 2009 Sydney Forum, James Saleam. Bookmark the permalink.