Well, not really. But still.

In July, a racist dingbat named Terrie-Anne Verney was sacked from her job as a sales rep for Griffith FM community radio station 2MIA. Terrie-Anne’s dismissal followed hot on the heels of her exposure as a racist (Multicultural radio presenter linked to anti-immigration Facebook groups, Asher Moses, The Age, July 2, 2009). In solidarity, Darrin — the face of the ‘Australian Protectionist Party’ (APP) — organised to raise a sum of money to donate to Terrie-Anne. Over a two-week period, over $400 was raised (or at least that’s what Darrin wrote on the Facebook page for the group ‘Fuck Off, We’re Full’) which sum Darrin dutifully transferred to Terrie-Anne.

The amount of support I have recieded [sic] in the last 2 weeks has amazed me.

The money that was raised on my behalf by Darrin Hodges has been appreciated and I thank everyone who parted with some of their hard earned cash to help a fellow Australian. I have been amazed by the generousity [sic] of my fellow Australians. The strength, support, kindess [sic] and friendship extended to me over the past fortnight has been overwhelming.

I thank each and every one of you have [sic] offered me your support and thrown whatever you could afford into the account, and thankyou to Darrin for putting it all together and offering me whatever assistance he could.

It is good to know that in times of need, that we can still rally around and offer suport [sic], strength and help to some body who needs it.

Perhaps the Aussie Spirit is alive and well after all.

Sadly for Darrin, a week later it was announced that ‘Terrible’ Terrie-Anne would be addressing the 2009 Sydney Forum (September 26–27), an annual event organised by Darrin’s arch-rival Dr James Saleam:

Being persecuted and fired from your workplace due to the personal political opinions you hold only happens in totalitarian regimes overseas, it would never happen in Australia in 2009… or would it? Hear a strong and brave young woman talk about how this happened to her in liberal democratic Australia because of her views on multi-culturalism and immigration.

NB. Also addressing the forum will be Andrew ‘I ♥ blonde hair and blue eyes’ Fraser; Dr. James ‘The Mad Arab’ Saleam; John ‘911 Was An Inside Job!’ Bursill; David ‘I wish we had more like you, Pauline’ Astin; and a mystery guest from the United States (whoever could it be?). (On Astin, see also : Free speech at Crikey?, March 3, 2005.)

Terrie-Anne, Andrew, James, John and David will be joined by Welf ‘Holocaust? What Holocaust?’ Herfurth, Nicole ‘For Blood & Honour’ Hanley, a few dozen middle-aged racists in cardigans, a scattering of ‘national anarchists’, and various other paranoid wackos.

The paranoid wackos of this seedy West London tenement had one thing in common — the conviction that Jews, Freemasons, homosexuals, Gypsies, Jesuits, anarchists and Communist Party members were all agents of subversion under the control of a ruthless global elite directing world events to their advantage… 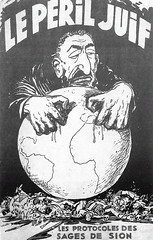 I live in Melbourne, Australia. I like anarchy. I don't like nazis. I enjoy eating pizza and drinking beer. I barrack for the greatest football team on Earth: Collingwood Magpies. The 2021 premiership's a cakewalk for the good old Collingwood.
View all posts by @ndy →
This entry was posted in !nataS, Anti-fascism and tagged 2009 Sydney Forum, Darrin Hodges, Terrie-Anne Verney. Bookmark the permalink.

5 Responses to Terrie-Anne Verney : Take the Money And Run