Update : AmRen organiser Jared Taylor has once again declared that the conference has been cancelled, following Capitol Skyline Hotel’s apparent decision to withdraw its services from the racist schmucks; Capitol Skyline was, I believe, the third or possibly fourth such hotel to do so. See also : White Supremacist Conference Cancelled, The Mormon Worker, February 18, 2010 | AmRen Canceled – This Time We Really Mean It, The Self-Described Anarchist Collective, February 18, 2010.

Once upon a time, BNP Führer Nick Griffin was going to tour The Colonies.

That was in late 2008. His tour, scheduled to take place in December and organised by the Australian Protectionist Party (the principal spokesperson for which, Darrin Hodges, was recently a guest on tabloid current affairs show Today Tonight), was eventually postponed cancelled. (A previous tour in 1998 was halted after then-Minister for Immigration and Multicultural Affairs Montgomery Burns refused him entry to the country.)

Secondly — and now — the United States.

Sadly, as in the case of Australia, Griffin’s tour of the former British colony has run into some difficulties.

Thus Griffin was scheduled to speak at the Ninth American Renaissance Conference (2010): Defending the West, joining a range of other Aryan Intellectuals such as ah, Dan Roodt and er, Craig Bodeker and um, Jared Taylor. 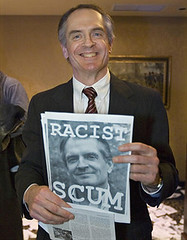 Then it got cancelled.

That’s right. Done. Kaput. Finished. Over. CANCELLED! After three months of getting the word out and letting people know that a group of politically connected white supremacists were planning to meet this weekend, American Renaissance editor Jared Taylor threw in the towel, effectively cancelling the American Renaissance Conference 2010…

And then it got re-scheduled. According to the fine folks at One People’s Project: “Despite earlier announcements that they cancelled the American Renaissance Conference, organizers say they have secured another venue, a hotel with a recent history of hosting white supremacists.”

Welcome to the Capitol Skyline Hotel in Washington, DC.

Forget about stuffy, over-designed, boring hotels. The Capitol Skyline is all about being happy, cool, interesting, fun, unpretentious, and comfortable. It’s a place where you can be yourself, see some incredible things, and be around people who are interested in racism, but not victims of it.

The conference is scheduled to take place from February 19. Or thereabouts. At The Capitol Skyline. Maybe.

In any event (or non-event), as a result of this latest fracas, Griffin’s tour of the United States has also been cancelled. Prior to his defence of Western Civilisation at the AmRen conference, on February 18 Griffin was supposed to speak at Kenyon College in Ohio. That event got cancelled. He was also intending to rally to the defence of the Sons of Liberty in Michigan, but that too has been cancelled.

Finally, in response to the re-scheduling of the AmRen conference, some self-described (to be confused with self-styled) anarchists have released a statement ‘Concerning the American Renaissance Conference’ (February 17, 2010). Further, both The Pink Mafia and ZOG have refused to either confirm or deny that Griffin’s difficulties have anything to do with the BNP’s failure to go soft on Uncle Rupert’s employees.

Note that in 2006, disgraced former Macquarie University academic Andrew Fraser addressed the AmRen conference. Born in Canada, he came to Australia on the understanding that it was populated by people with blonde hair and blue eyes. Fraser has also spoken at far right forums in rural NSW (Inverall) and Sydney. See also : Alexander Hart, The Saga Of American Renaissance’s 2010 Conference: “Anarcho-Tyranny” In Action, VDARE.com, February 16, 2010 [http://vdare.com/hart/100216_anarcho_tyranny.htm].

I live in Melbourne, Australia. I like anarchy. I don't like nazis. I enjoy eating pizza and drinking beer. I barrack for the greatest football team on Earth: Collingwood Magpies. The 2021 premiership's a cakewalk for the good old Collingwood.
View all posts by @ndy →
This entry was posted in Anti-fascism and tagged American Renaissance, AmRen, Jared Taylor, Nick Griffin. Bookmark the permalink.