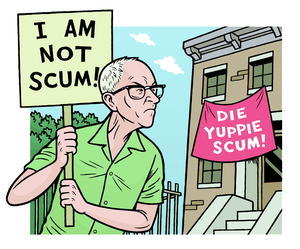 At the same that the Conspiracy of Fire Nuclei/Nuceli of Fire Conspiracy has apparently disavowed responsibility for a lethal attack in Athens on the weekend, a group calling itself the ‘Revolutionary National Socialist Front’ has done gone and claimed it. Authorities still appear to be convinced It’s A Conspiracy!, however, and have pooh-poohed suggestions that it’s fascists what done it. In The Real World, meanwhile, an appeal will presumably be launched to provide financial support to the family devastated by the blast, as the Greek state takes advantage of the incident in order to justify its more general repression of political dissent; a necessity in light of new austerity measures currently being imposed upon the general population…

In a new development for local guerrilla groups which operate in Greece for years and mostly are anarchist and far-Left, the new terrorist group is pro-racist and targets immigrants on purpose, as well as political and financial targets. That is the first conclusion of counter-terrorism experts based on a statement released on an internet site.

“In Greece in 2010 we are in danger of ending up as foreigners in our own country … Greek governments have no policy on migration … We will not accept this situation. Not at Patisia nor anywhere else. For their sake and ours, foreigners leave every district,” said the statement which concluded with a warning that in the future no gathering in a mosque should be considered safe in Athens.

The perpetrators did not confirm police estimations that the Afghan teenager is a victim of a tragic mistake made by whoever is responsible, but stressed that they do not apologize for any death. “We are at war and in wars even minors die,” the statement said.

Greek police still have not confirmed the authenticity of the claim of responsibility, as just a few hours earlier on Tuesday another group “Guerrilla Group Lambros Fountas” also claimed responsibility for the same attack with a phone call to a Greek newspaper.

In Barnsley, ‘Devil Bitch Tattoo’ in Wellington Street and ‘The Fleets’ pub in Smithies Lane have both closed for business according to Antifa UK. This follows their exposure as being closely associated with and strong supporters of the BNP. (“The Fleets was established in 1993 as the family owned, family run business that it is today. We pride ourselves on a friendly, efficient service…” and keeping the darkies at bay.)

In Melbourne, ‘The Birmy’ pub on the corner of Smith and Johnston Streets in Fitzroy was until mid-2008 under the management of Gary Wayne Kitto, a fascist sympathiser who provided a platform for members of the neo-Nazi groups Blood & Honour and the Hammerskins for almost a decade. Despite resistance from local patriotic punks and skinheads, after a community boycott of the pub was initiated it changed hands, and is now a Nazi-free zone. ‘Hold Fast Body Art’ — a tattoo studio on Burwood Highway, Burwood — on the other hand, is still under Nazi occupation, in this case by Justin O’Brien, the Victorian state representative for Blood & Honour. Naturally, patriotic punks and skinheads continue to support the business, but whether or not this is sufficient to keep it afloat remains to be seen.

Richard Bartholomew has an interesting post on the subject of English Teabaggers: The EDL vs “COMMUNISM!!!!” (March 30, 2010). It’s all about the threat posed to England by COMMUNISM!!!!, and how the English Defence League is defending England from it (and Islam).

Speaking of COMMUNISM!!!!, the Socialist Alliance has thrown down the gauntlet to the Australian Protectionist Party (who, it should be noted, are no fans of COMMUNISM!!!! Or Islam). Thus in Sydney: Socialist candidates take on the racists (Peter Boyle, Green Left Weekly, March 27, 2010). Both the APP and Australia First have declared they will be fielding candidates at the upcoming Federal election: Tony Pettitt (Greenway) and Mick Saunders (Lindsay) for AF; Nicholas (Hunter) Folkes (Sydney) for APP. Unlike SA, neither AF nor APP are registered political parties.

“It’s unfortunate but thankfully he has his parliamentary pension to keep food on the table.”

For reasons which remain obscure, former One Nation Party MP David Oldfield will no longer be polluting the airwaves on behalf on 2GB. Aside from (allegedly) having sex with Pauline Hanson — who is (supposedly) pissing off to England at some point — Oldfield was also known for being pranked. “The silly kids who called in” to his show will no doubt be disappointed upon learning that he’s departed, but I reckon his replacement will be rather similar.

“hey everybody iam the bloke that put the [nazi] flag up”

In a shocking new development, the bloke what put the Nazi flag up in his backyard in Brisbane recently has announced he is a member of the Stormfront forum — the world’s leading White supremacist forum, the Australasian section of which is capably administered by Perth plasterer Paul Innes.

hey everybody iam the bloke that put the flag up in the first place the only reason i took it down is that i had threats against my children who were threatened with being stab and bashed and can you believe it by more whites then blacks or any other race work that out. it will be going back up as soon as the media […] off i have had channel ten, nine, aca 4bc radio and the courier mail hanging around still it is the 25th of march as i right this and yesterday it made the local papers again. […] i will fight for the rights of white people and my brothers and sisters but i will not put up with threats to my family and that is that. 14/88

Obviously, Paul is kept very busy removing profanities and racial epithets, but removing spelling and grammatical errors, logical fallacies and nonsensical assertions from Stormfront is a task he is ill-equipped for. As for ‘chopper 88’ (88=HH=Heil Hitler), he announced his fucking flag’s fucking presence back in January:

Re: Do you fly the Australian flag from your home?

i proudly fly the battle flag from the front of my shed at home and yes ?some people have had a winge about it, but i stand my ground and tell em to […] off its on my property.

Poker Face. I thought I’d encountered that name before somewhere, and I had: it’s one of a tiny handful of ‘punk rock’ bands so patriotic they almost burst with pride, strength and honour (and anti-Semitism), and as such the band was interviewed by Portuguese bizarro Flávio Gonçalves, a ‘national anarchist’ who, like Sydney-based fascist Welf Herfurth, once mashed a keyboard on behalf of the bizarro mathaba.net site. In fact, in 2007, Gonçalves interviewed Poker Face for the site.

But who are Poker Face, and who cares anyway?

Well, a bizarro Xtian kult/crazy last-days war-gamers known as the ‘Hutaree Militia’ got themself arrest recently, and of them Poker Face wrote: “At the present time, Poker Face has no comment on the situation developing/unfolding with the Hutaree folks. But given the governments track record against we the free, it makes us suspect government motives first, not the Hutaree… We pray that cooler heads prevail, and we are talking about ALL sides.”

One People’s Project has lots moar on the plastic punks here.

Riot squad, sniffer dogs and police on horseback gathered around the Humanist Society building in Chippendale on the first Friday night in November as a hundred local folk conducted a lively street protest against a neo-Nazi group that had planned to meet in the building.

The demonstration had been initiated by some local people who had been disturbed at the sight of Nazi icons on those apparently using the building for a regular neo-Nazi meeting. In an address to the crowd, one local resident told of his fear as a gay person at seeing people gathering with brazen displays of Nazi paraphernalia associated with murderous homophobia, racism and cultural intolerance. Other people from groups targeted by Nazis expressed similar concerns. Yet the second speaker, Chris Mansergh, a long-term truth and social justice activist, spoke in favour of the right of the neo-Nazi group to meet, on the principle of freedom speech.

Mr Mansergh told the SSH that he had gone to the Humanist Society building a few weeks previous for a meeting of another group, and he and his friends had then been terrorised by people attacking the building with baseball bats and smashing windows, not knowing until afterwards who those people may have been or what they wanted. It seems likely that these people had been trying to protest against Nazis, using the same techniques for which Nazis are notorious.

Kieran Adair, a local university student who came to support the rally, told the SSH: “I don’t want fascists in my city or my country. The Nazis started this way and it’s too dangerous to even let them plant their roots. Hate speech is not free speech.” Dale Mills, 46, a long-term member of the Humanist Society, told the SSH: “I think that freedom of expression is very important, but this is more about organisation, and far-right organisations coming together to organise and promote their policies. If their policies are racist and hateful, I think that leasing them a room to let them do that is a step too far.” He said the booking had probably been made without the nature of the groups being known.

President of the NSW Humanist Society, John August, issued a statement to that effect, explaining that a group called the Public Information Forum (PIF), banned from meeting at Humanist House in 2005, had returned under the name Klub Nation. At the recent AGM in August 2009, PIF/Klub Nation participants and supporters were elected to the Humanist Society’s management committee.

I live in Melbourne, Australia. I like anarchy. I don't like nazis. I enjoy eating pizza and drinking beer. I barrack for the greatest football team on Earth: Collingwood Magpies. The 2023 premiership's a cakewalk for the good old Collingwood.
View all posts by @ndy →
This entry was posted in Anarchism, Anti-fascism, Death, History, Music, State / Politics, War on Terror and tagged COMMUNISM!!!!, Conspiracy of Fire Nuclei, David Oldfield, Hold Fast Body Art, Justin O’Brien, Nuceli of Fire Conspiracy, Paul Innes, Poker Face. Bookmark the permalink.