Socialist Alternative: socialist jihadists of the far Left subsisting on a diet of anti-Semitism, lentils and tofu

Nick Dyrenfurth has a bone to pick. Several, in fact. With Socialist Alternative; anti-Semitism; opposition to Zionism; and “the UN-sponsored anti-Israel hate-fest dubbed Durban II” (Rudd must shun UN anti-Semitism, The Australian, March 16, 2009).

Socialist Alternative is a leftist political party, a neo-Trotskyist organisation with several hundred members, mostly University students. According to Nick, SAlt panders to anti-Semitism in its propaganda. The message on one of its posters advertising a meeting on “War: Why capitalism is to blame” at the University of Sydney during ‘O’ Week:

…was clear. Israel, the US’s proxy in the Middle East, is to blame for all the problems of the Middle East, if not the woes of the world. Get rid of Israel and we’ll all live happily ever after, presumably on a strict diet of lentils and tofu. The more serious and indeed frightening symbolism at play was the clearly racist, anti-Semitic linkage of Israel, and by association Jews, with the machinations of “evil” capitalism.

Of course, one might argue that the SAlt crazies involved in the postering are in no serious sense part of mainstream public discourse, and that just like their mates in Europe, they simply exploit tensions in the Middle East for their own purposes. In which case, Nick is indeed “giving the largely irrelevant hatemongers of the extreme Left far too much credit. Nevertheless, as has been well-documented, anti-Semitism is on the rise worldwide.”

Nick may like to consider that Australia, fortunately, has not previously been blighted by the sort of anti-Semitic activities which have had such a disastrous impact on political debate in Europe. As such, SAlt are simply provocateurs that open up legitimate debate to public ridicule. (In Europe their ranks have been riddled by police agents and fascists.)

Because of the behaviour of these provocateurs, racists and anti-Semites are having a field day.

Combating anti-Semitism is a difficult and, sadly, perhaps an eternally vigilant task. Governments can pass all the legislation they like, launch countless educative programs, but somewhere out there will lurk the anti-Semite convinced that Jews run the world and that Adolf Hitler ought to have finished them off. Yet individuals ought to take some personal responsibility.

Nick is likely correct in assessing the fortunes of The Eternal Jew Hater. However, it’s worth noting that on the far right, The Eternal Jew is competing with The Forever Muslim for first place in The Racist Stakes.

Somewhere in the middle is the Australian Protectionist Party.

On the one hand, the APP has abandoned public expressions of anti-Semitism; on the other, its webmaster, Martin Fletcher, makes no attempt to conceal his hatred and contempt for Jews, making available on his website an array of anti-Semitic propaganda, both contemporary and historical. Linking the two — the contemporary and the historical — is David Lane.

A leading figure in the modern US neo-Nazi movement, Lane died in March 2007 in a federal prison in Terre Haute at the age of 68. He was serving a 190-year sentence for racketeering, conspiracy and violating the civil rights of Denver radio talk show host Alan Berg, who was murdered in his driveway in 1984 by Lane and other members of the Bruders Schweigen, or Silent Brotherhood. The terrorist group was also known as The Order. Lane, a onetime member of the John Birch Society and the Ku Klux Klan, was a founding member of the group and served as the getaway driver in the Berg murder.

Currently, some of Lane’s ashes are in Perth. Local nutzis are planning on holding a private ceremony to honour Lane, and to dispose of his ashes. Unfortunately for them, a dispute has emerged regarding ownership of his remains. On the one side is Victoria “Vickie” Cahill, an Irish nutzi, US resident, and a member of ‘Women for Aryan Unity’. On the other side is the Australian division of the bonehead group ‘Combat 18’ (18=AH=Adolf Hitler) and their comrade Paul Innes (‘Steelcap Boot’), the Yanqui-appointed moderator of ‘Stormfront Down Under’.

Lane & Co. were inspired by The Turner Diaries, authored by the dead nutzi Dr William Pierce. The Diaries — along with My Awakening by ex-KKK Grand Poobah David Duke, The Myth of the Six Million by David Hoggan, In Defense of Anti-Semitism by Edgar J. Steele, The International Jew by Henry Ford, Did Six Million Really Die?, The Leuchter Report by Fred Leuchter and the video game Muslim Massacre — are all available for FREE! download on Australian Protectionist Party member Martin Fletcher’s website, Down Under Newslinks. There you can also find a gallery of ‘Anti-Jew posters’ produced by Serbian fascists during WWII, and cartoons produced by Tom Metzger’s White Aryan Resistance. 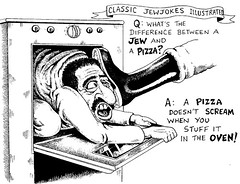 The campaign to boycott the UN-sponsored anti-Israel hate-fest dubbed Durban II has been waged for some time now. In July last year, Anne Bayefsky wrote ‘Australia must boycott the next racist hatefest’ (Sydney Morning Herald, July 22, 2008). In December, The Australian editorialised against ‘Durban II’, characterising the 2001 conference as “a festival of anti-Semitism”. In February of this year, senior Israeli diplomat Dan Gillerman warned KRudd against sending an Australian delegation.

The campaign has been joined by a variety of figures, from professional chatterer Andrew Bolt to a vast number of amateur right-wing bloggers. Most recently, Tory Party leader Malcolm Turnbull ‘said the conference would again cast a poor light on the United Nations. “It will be an appalling example of anti-Semitism and Israel bashing, tragically under the auspices of the UN”‘; and has urged KRudd to join the governments of Israel, the United States, Canada and Italy in boycotting the event (Turnbull urges immediate Durban withdrawal, Ashley Browne, Australian Jewish News, March 13, 2009). Dyrenfurth agrees with Turnbull: “Rudd should follow the lead of the Obama administration, Canada and Italy and declare his Government’s intention to boycott the UN-sponsored anti-Israel hate-fest dubbed Durban II, planned for April 27.”

Now the EU is threatening to withdraw:

BRUSSELS: The European Union said Monday it could boycott a U.N. conference on racism next month unless Muslim nations end attempts to strongly criticize Israel in the meeting’s final document.

Czech Foreign Minister Karel Schwarzenberg, whose country holds the EU presidency, said EU nations were “very skeptical” over the direction of negotiations on a declaration being drafted for the so-called Durban II conference. He adds the 27-nation bloc will attempt to push for changes but “there is a strong call to withdraw” if they are not successful…

…Dutch Foreign Minister Maxime Verhagen said a draft backed by the 57-member Organization of the Islamic Conference “limits itself to Israel-bashing, anti-Semitism, limiting freedom of speech and other dubious texts.”

So intense has been the criticism that Rupert Colville, Spokesperson of the Office of the UN High Commissioner for Human Rights, chose to issue a Press Release : Distortions plague anti-racism conference (December 12, 2008). It responds, in part, to the kinds of criticisms offered by Dyrenfurth. For example, “…the small matter of a trio of dictatorships, Libya, Iran and Cuba, leading negotiations towards a statement of principle”. Colville:

…a widely repeated allegation [is] that control of the Review Conference’s preparatory process, steered by an organizational body of 20 states, has been seized by a group of three countries, namely Libya (whose representative is the Chair), Cuba (Rapporteur/Vice Chair), and Iran (Vice-Chair). Such reports imply that these three states have an enormous amount of executive power. They do not. Chairpersons of bodies of this type fulfill an essentially functional role and are not in a position to push their own country’s agenda.

Such reports also routinely – and in some cases deliberately – omit to mention that, along with Iran and Cuba, there are 17 other Vice-Chairs including Belgium, Greece, Norway, Turkey, Armenia, Croatia, Estonia, Senegal, South Africa, India, Indonesia, Argentina, Brazil, and Chile. The role of the Rapporteur/Vice-Chair is to oversee reports on proceedings produced by UN staff. If those reports were in any way distorted, the other Vice Chairs could – and would – intervene.

The real bone of contention, however, is criticism of Israeli state policy. Speaking of which, 38-year-old Tristan Anderson, a US citizen — goddammit — has become one of its latest beneficiaries. Anderson was critically injured on Friday, March 13, by Israeli troops during protests against Israel’s Wall in the West Bank village of Ni’lin. He was hit in the forehead by a new type of high velocity, extended range teargas projectile, and has been transferred to Tel Hashomer hospital, near Tel Aviv. See: American citizen critically injured after being shot in the head by Israeli forces in Ni’lin, ISM, March 13, 2009. Note that:

In the past six months, four of Ni’lin’s residents have been shot dead during demonstrations against the wall on their land. Ahmed Mousa, 10, was shot in the forehead with live ammunition on July 29, 2008. The following day, Yousef Amira, 17, was shot twice with rubber-coated steel bullets, leaving him brain dead. He died a week later on August 4, 2008. Arafat Rateb Khawaje, 22, was the third Ni’lin resident to be killed by Israeli forces. He was shot in the back with live ammunition on December 28, 2008. That same day, Mohammed Khawaje, 20, was shot in the head with live ammunition, leaving him brain dead. He died three days later in a Ramallah hospital. ~ Anderson now breathing independently, International Middle East Media Center, March 17, 2009

On March 16, a demo in solidarity with Anderson in front of the Israeli Consulate in San Francisco was attacked by police.

I live in Melbourne, Australia. I like anarchy. I don't like nazis. I enjoy eating pizza and drinking beer. I barrack for the greatest football team on Earth: Collingwood Magpies. The 2023 premiership's a cakewalk for the good old Collingwood.
View all posts by @ndy →
This entry was posted in Anti-fascism, State / Politics, Student movement, Trot Guide. Bookmark the permalink.

25 Responses to Socialist Alternative: socialist jihadists of the far Left subsisting on a diet of anti-Semitism, lentils and tofu