Over in New Zealand/Aotearoa Kyle Chapman, leader of the neo-Nazi skinhead group ‘Right Wing Resistance New Zealand’ (RWRNZ), is busy capitalising on the publicity surrounding the group’s latest propaganda campaign, one which centres on the distribution of flyers calling on members of the public to ‘Stop the Asian Invasion’ and to join RWRNZ.

Anti-Asian group says campaign is to recruit members
TVNZ
May 11, 2011

In other words, Kyle is continuing to engage in the same brand of political activism he was pursuing when he was a member of the New Zealand Hammerskins in the late 1980s and 1990s. Indeed, the two groups bare an uncanny resemblance to one another, both in terms of their political perspective but also size, shape and organisation. Of course, Kyle has played a leading role in other far right political formations in-between his leadership of these two gangs, most prominently the ‘New Zealand National Front’ (NZNF) (now under the leadership of Colin Ansell). Note that prior to RWRNZ Kyle, a Mormon, got married, and made a public break with his many years of fascist organising, promising his new wife to dedicate his life to religion not politics. The fact that Kyle was unable to keep his promise suggests that his attachment to fascist politics borders on the pathological. 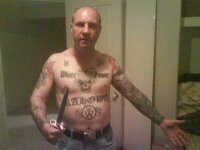 Back in Melbourne Patrick O’Sullivan (above), the leader of an even tinier neo-Nazi religious cult known as Creativity, has once again had his indefatigable attempts to cover the suburbs of Melbourne with stickers promoting his wacky beliefs rewarded, this time by the ABC.

Previously, local newspapers reported that the stickers had appeared on the entry to a Salvation Army office in Lilydale. In fact, Patrick has been putting stickers up around town for years, his commitment to doing so only interrupted by a short spell in prison (convicted in August 2002 of a “cowardly” and “violent” assault upon another bonehead in May 1999, Patrick was sentenced to 33 months). Given Torquay’s proximity to Geelong, a likely culprit might otherwise be Deakin University student Scott Harrison, another nutty ‘Reverend’ in the White supremacist cult: the fact that Scott belongs to a rival faction of Creatards, however, suggests this is unlikely.

In any case, congratulations to both Kyle and Patrick for subverting The Controlled Media. RAcial HOly WAr is surely just a t-shirt sale away…

I live in Melbourne, Australia. I like anarchy. I don't like nazis. I enjoy eating pizza and drinking beer. I barrack for the greatest football team on Earth: Collingwood Magpies. The 2021 premiership's a cakewalk for the good old Collingwood.
View all posts by @ndy →
This entry was posted in Anti-fascism, Media and tagged Creatards, Creativity Movement, Kyle Chapman, Patrick O'Sullivan, Right Wing Resistance New Zealand, RWRNZ. Bookmark the permalink.