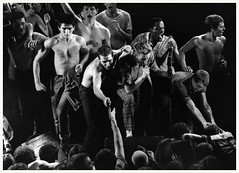 On July 4, 1998, two skinheads — Lin “Spit” Newborn, 24, and Dan Shersty, 20 — were murdered by boneheads in the rocky desert northwest of Las Vegas, USA. Their crime, like that of Maciek D., was to be effective in the fight against racism and fascism.

The only person to be convicted of their murders, John Edward Butler, was initially sentenced to death for the crime in 2001, but, after failing in his first attempt in 2002, was eventually successful in winning an appeal against his sentence in 2004. However, prosecutors say that at least four people were involved in the plot to kill Lin and Dan, although so far no others have been charged. Further, “While hate crimes such as the torture of a gay man in Wyoming and the dragging death of an African-American man in Texas have received national attention, the deaths of Lin Newborn and his friend Dan Shersty are chronicled more by friends and activists than the national press”. In fact:

Prosecutors from the Las Vegas district attorney’s office were slow to prosecute the case despite holding the key evidence necessary to try the case only a week after the murders. It was not until after a 500 person Anti-Racist Action protest in the fall of 1998 in John Butler’s neighborhood, and a similar protest in 1999, where activists marched down the Vegas strip distributing information on the case to tourists and demanding the case be prosecuted, that the district attorney acted.

Allegedly, Butler had received money in the past from the Las Vegas police department as a police informant.

Ross Hack, who fled to Europe when he was identified as a suspect two years ago, has never been charged for his involvement in the murder. According to the defense attorney, Ross Hack has been on a “two-year vacation in Europe,” courtesy of his rich father.

Prosecutors say they have no plans to pursue charges against Ross Hack. Melissa Hack also remains uncharged in the case.

Lionel Newborn said his son had told him that he was involved in various organizations that opposed racism.

After the slayings, the father learned with some pride that his son played a leading role in this effort.

“I had no idea that he was involved to the extent that he was,” Lionel Newborn said. “I probably wouldn’t have been able to sleep at night.”

It pains [Dan’s father] that his son’s sacrifice is unheralded while the media obsesses on the cultural war between liberal and conservative values. It’s a war, he says, that demands no risk whatsoever from its TV-talking head combatants. “Dan died as a soldier who believed in his cause — anti-racism,” says Walter. His son’s ARA troops are still fighting for the cause, though police advised them to leave when rumors surfaced that the Nazis had created a hit list. The cause unites them with something valued in military custom: courage and a code of honor.

Insurgence Records : Great Canadian record label, with releases by Brigada Flores Magon, Stage Bottles and The Oppressed, among others
Skinhead vs. “Skinhead” in Anti-Racist Fight
Murray Forman, ‘Betrayal and Fear: Press Coverage of Canadian Skinheads’, Canadian Journal of Communication, Volume 17, Number 2, 1992
Interview with Roddy Moreno, The Oppressed (more here and here)
Skinhead Attitude : Highly recommended documentary film
Skinhead Culture : “A short history of Skinhead culture from its birth in 1960s Britain, and its association with revolutionary working class, anti-racist politics – which was always bigger than its connection with the fascist ‘boneheads’ who tried to use it to recruit young Nazis”
Racist “Skinheads” : This page contains information The Rick A. Ross Institute has gathered about Boneheads
(More) Racist “Skinheads” : News on ‘skinheads’ from the Internet Centre Against Racism Europe
Anti-Racism: A Risk To Life and Limb (Searchlight, June 2006)

I live in Melbourne, Australia. I like anarchy. I don't like nazis. I enjoy eating pizza and drinking beer. I barrack for the greatest football team on Earth: Collingwood Magpies. The 2023 premiership's a cakewalk for the good old Collingwood.
View all posts by @ndy →
This entry was posted in Anti-fascism, History. Bookmark the permalink.

32 Responses to RIP Dan and Spit