June 2009 marks the 9th and final year that Jeff ‘Free’ Luers will spend in prison. Jeff was originally sentenced to 22 years and eight months in gaol for setting fire to 3 SUVs at the car dealership Romania Chevrolet (in Eugene, Oregon in the United States) in an attempt to draw greater attention to global warming. Since then, in early 2008, Jeff won an appeal against the severity of his sentence, and was re-sentenced to 10 years. As a result, Jeff will be released this December 2009.

In Melbourne Tonight Barricade Infoshop & Friends arranged a screening of some films on radical environmentalism in the United States to raise some funds for imprisoned comrades. Other upcoming events for June include ‘Transfer of Knowledge’ (story, music and culture from Palm Island) on Thursday, June 18 and on Friday, June 26 another film night featuring Living Utopia (on anarchists in the Spanish Revolution) and The Potentiality of Storming Heaven (on the social revolt in Greece in December 2008).

Unfortunately, Jeff — arrested along with Craig ‘Critter’ Marshall in 2000, and sentenced on June 11, 2001 — is merely one of the first casualties in the US state’s war on the radical ecological movement, a war spearheaded by the FBI and given further impetus by George II’s regime declaring a bogus ‘War on Terror’ following 9/11. One of the most recent casualties of the ‘Green Scare’ is Marie Mason, sentenced in March 2009 to 21 years and 10 months for her role in a December, 1999 arson at a Michigan State University genetics laboratory at Agriculture Hall and a January, 2000 arson of logging equipment in Mesick, Michigan. Both arsons were claimed by the Earth Liberation Front.

For further information on the Green Scare see Green Is The New Red.

The most recent individual to join the growing ranks of eco-terrorists is Jessica Alba. 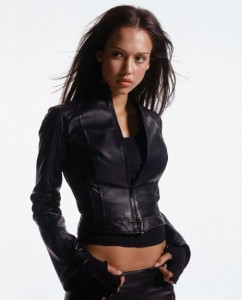 Above : Jessica Alba pictured in her Earth Liberation Front starter kit (minus the black mask).

Who are Political Prisoners and Prisoners of War?

There are over 150 political prisoners and prisoners of war in the United States at this time as well as countless politicized individuals and social prisoners resisting their captors. Jeff Luers is a political prisoner and has been granted this status because of his excessive sentence, politically motivated actions and his resistance on the inside.

Support for Jeff does not exist within a vacuum. We encourage people to work on political prisoner support and against the growing incarceration of people across [the United States — and the world]. You can find many groups that work with political prisoners, prisoners of war, detainees as well as prison abolitonists on our links page.

The most up to date [?] listing of political prisoners and prisoners of war in the United States is on the Prison Activist Resource Center.

A more up to date list (of ‘eco-prisoners’) is likely that provided by the Earth Liberation Prisoners Support Network.

I live in Melbourne, Australia. I like anarchy. I don't like nazis. I enjoy eating pizza and drinking beer. I barrack for the greatest football team on Earth: Collingwood Magpies. The 2021 premiership's a cakewalk for the good old Collingwood.
View all posts by @ndy →
This entry was posted in State / Politics, War on Terror and tagged Green Scare, Jeff 'Free' Luers. Bookmark the permalink.