Titles kindly provided by the generous Spirit of ‘F*** Off We’re Full’ & Facebook by way of the Department of “As Australians, we have our own culture, our own society, our own language and our own lifestyle.”

Others believe he represents something more dangerous: a growing racist movement motivated by a number of converging factors, including the first black president.

The potential for an increase in violence from whites who feel they are slipping from power is high, people from across the ideological spectrum say.

“I believe we are headed for an unprecedented level of conflict and racial turmoil,” said Carol Swain, author of the 2002 book The New White Nationalism in America and a professor of political science and law at Vanderbilt University.

“It seems like the tables have turned for some white people, and they have no recourse except desperation,” Swain said…

Lifting the veil on our ingrained racism
Sandy Gifford
The Age
June 13, 2009

AUSTRALIA is a racist society. There, I’ve said it. I’ve wanted to say this for the past 24 years — from the time I arrived here. Within my first week on Aussie soil a well meaning young man offered to introduce me to “boongs” — I thought he meant an Australian kind of dope-smoking pipe. When I expressed my shock on discovering that it referred to an Australian form of racism, he assured me that I would agree with him once I knew the truth. Anyway, I was a Yank and a foreigner so what did I know?

The West Australian Coroner has given his findings in the case of a man who was effectively cooked to death in the back of a prison van.

Last January an Aboriginal elder known as Mr Ward was being driven in the back of the van through the searing temperatures of The Goldfields.

The air-conditioning unit was not working and the temperature inside reached 50 degrees Celsius.

Before he died, the 46-year-old from Warburton suffered third-degree burns where his body touched the hot metal floor.

Mr Hope said Mr Ward died as a result of heat stroke which was caused by grossly excessive heat in the pod in the transit van taking him from Laverton to Kalgoorlie.

A public meeting also on Saturday will be at 3pm at Trades Hall Meeting Room 1. 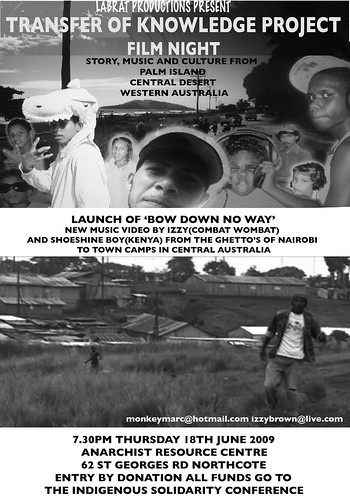 RIP: The Black Mick Jagger (June 27, 2007). If you haven’t already, do yourself a favour and garb a copy of the Warumpi Band’s classic 1987 album ‘Go Bush’. I’m gonna upload some Tiddas to YouTube later too. One of their first performances was a benefit gig in Melbourne for the ‘International Workers’ Club’ — which, through various twists and turns of history, has now become known as the ‘Melbourne Anarchist Resource Centre’, the venue for Thursday night’s benefit gig. (An aged sober slackbastard remembers that a younger drunken slackbastard had a great time that night — I may even have the flyer lying around somewhere…)

I live in Melbourne, Australia. I like anarchy. I don't like nazis. I enjoy eating pizza and drinking beer. I barrack for the greatest football team on Earth: Collingwood Magpies. The 2021 premiership's a cakewalk for the good old Collingwood.
View all posts by @ndy →
This entry was posted in Anti-fascism, Art, Death, Film, History, Media, Music, Poetry, Sex & Sexuality, State / Politics. Bookmark the permalink.