Ah well. I’m too hot (and tired) to blog — or to do much of anything else, really — but there are a few things I oughta take note of before I forget ’em.

First, I would’ve liked to have finished writing up my thoughts on the whole ‘Socialist Alternative ♥s Feminism/Feminism Is Middle-Class (unlike SAlt)’ thing. I would’ve also liked to have finished my working draft post, ‘Ten Reasons Why I’m Against Against Sexual Optimism’ . . . but I haven’t . . . and Bakunin knows when I will . . . Oh-Why-Is-It-So-Fucking-Hot . . . my bRanes is Melting.

Secondly, the potty-mouthed priest Reverend Monsignor Geoffrey Brown is at it again.

A CONTROVERSIAL Catholic priest due to join a church on the Gold Coast this week has turned his back on the posting.

Fr Geoff Baron, a former Melbourne priest who achieved internet infamy thanks to a foulmouthed clash with a group of teenage skateboarders, was to have joined the Southport Catholic Parish this week as an assistant pastor.

However, Fr Baron suddenly decided to quit his new post before he had even started.

Church officials said he had now taken a lengthy break and would visit friends around Australia.

Fr Baron became an internet “star” in 2007 when he was involved in an expletive-laden clash with skateboarders outside St Patrick’s Cathedral in Melbourne.

Many people were appalled at his foul language, but he also attracted support from others praising him for standing up to the youths, who had allegedly caused damage to the heritage-listed cathedral precinct over an extended period…

The World According to Kyle

Speaking of foul-mouthed creatures, the boneheads belonging to Kyle Chapman’s ‘Right Wing Resistance New Zealand’ are actually quite thoughtful. Below, the intellectuals attached to this elite unit explain the differences between Democracy and Fascism: 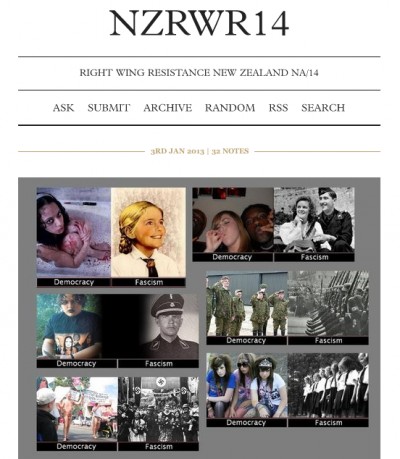 Fourth Reichly, Finnish nazi MMA Niko Puhakka has been taken off the bill for an MMA tournament in Dublin, Ireland. His removal was apparently on account of the fact that he embraces racism and genocide — which is totally unfair and makes The Irish worse than The Nazis (whom Puhakka worships). Or something. Anyway, AFA Ireland appears to have played a major role in bringing the bonehead’s political commitments to the attention of both tournament organisers and the general public, so butthurt fans should fwd hatemail in their direction.

Speaking of crypto-nazis, the forces of International Jewry failed to prevent local NSBM band Sanguinary Misanthropia & The Spooky Kids from launching their new album, released on German label Supremacy Through Intelligence Intolerance, at The Gasometer on December 16, 2012.

Finally, a fourth anarchist has been jailed for refusing to testify before a Grand Jury in the United States and and Philip wrote another thing about Felicity.

I live in Melbourne, Australia. I like anarchy. I don't like nazis. I enjoy eating pizza and drinking beer. I barrack for the greatest football team on Earth: Collingwood Magpies. The 2021 premiership's a cakewalk for the good old Collingwood.
View all posts by @ndy →
This entry was posted in !nataS, Anti-fascism, History, Media and tagged Kyle Chapman, Niko Puhakka, Reverend Monsignor Geoff Baron, Right Wing Resistance New Zealand. Bookmark the permalink.