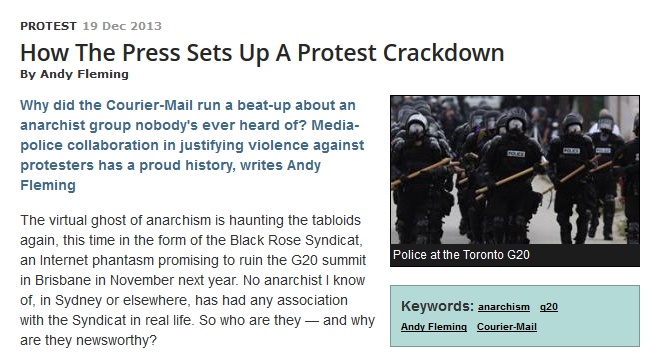 I first encountered the bizarr0 ‘Black Rose Syndicat’ back in May: a Facebook page of that name was published on May 3 and a few indymedia articles appeared on May 10 and 16. Because of the craptastic nature of the posts which announced the fictional group’s existence, its adoption of the name ‘Black Rose’, and its claim to be located in the same suburb, I wrote to Black Rose infoshop in Newtown, Sydney asking if they knew anything more about these semi-literate keyboard warriors. I never received a reply, but over the course of the next few months I asked several anarchists I knew in Sydney the same question. None were able to provide me with any information to suggest that the Syndicat was anything other than a weird-arse ~jk~ — a local anarchist version of Crimer Show, perhaps — a phantasist looking for attention and/or to sell some merch, or even a badly-composed attempt by forces hostile to anarchism (and friendly to the G20) to gather infos on local anarchist organising and/or to ensnare some teenage wanna-be insurrectionists in some rather dickheaded fun …

In any case, given the derisory nature of the Syndicat’s online antics, and the fact that six months later its Facebook page had only managed to attract a little over a dozen likes, I decided to let sleeping dogs lie. Last week, however, the Courier Mail decided to splash the name of the Syndicat across its pages, taking its idiotic outpourings on indymedia and elsewhere as serious attempts by ‘anarchists’ to create “CAOS and Mayhem” at the G20 summit in Brisbane next year. As evidence, the article referred to two seven-month old indymedia posts (one of which was written by the group posing as a critic: the non-existent “Sydney University Socialist Club”) and two posts on the Syndicat’s Facebook page, also dating from around the same time.

The propaganda function of the mass media is hardly remarkable, nor its capacity to reflect elite concerns over potential troublemakers, but given the shift by international law enforcement to entrapment of activists in violent plots, the recent introduction of highly repressive laws in Queensland and weak opposition, the silly antics of the “Syndicat” may be worth taking a little more seriously than they would if they were just a reanimated Jonny Hammerlock.

I live in Melbourne, Australia. I like anarchy. I don't like nazis. I enjoy eating pizza and drinking beer. I barrack for the greatest football team on Earth: Collingwood Magpies. The 2023 premiership's a cakewalk for the good old Collingwood.
View all posts by @ndy →
This entry was posted in !nataS, Anarchism, Broken Windows, History, Media, State / Politics, That's Capitalism!, War on Terror and tagged G20, The Black Rose Syndicat. Bookmark the permalink.