Australia First Party leader Dr James Saleam is contesting the Marrickville council election on November 15. He’ll be losing to Labor, Liberal and The Greens candidates.
Prior to this, posters were distributed in Redfern seeking to steer the Indigenous struggle in an anti-Chinese direction. Cheeky stuff given that the twin pillars of the White Australia policy were anti-Aboriginal and anti-Chinese sentiment, practices and policies, but in keeping with the party’s apparent dedication to guerilla marketing. In any event, the Redfern Aboriginal Tent Embassy denounced the provocation, and I suspect it may be some time before Australia First succeeds in inserting itself into the campaign for low-cost public housing for Redfern’s Indigenous population.

One of my favourite neo-Nazi groupuscules is Women for Aryan Unity. Back in 2009, WAU had quite a battle on its hands when distributing the ashes of dead guy David Lane, a US-based nazi most famous for coining The 14 Words White supremacists live by: “Save the Aryan race. Procreate with your sister, mother, aunt, and if necessary, grandmother.” 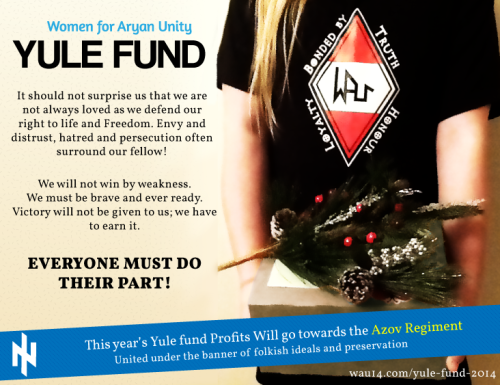 The grrls at WAU are currently organising a fundraising appeal for the Azov regiment in Ulkraine, a group which has attracted the support and involvement of radical, right-wing elements from across Europe. The London-based ‘Solidarity with the Antifascist Resistance in Ukraine’ has some analysis of Azov here, while Anton Shekhovtsov’s blog carries a number of articles analysing the crisis in Ukraine from an anti-fascist perspective.

Rezza Antifa is a new group which describes itself as a “Committed group of active Anti fascists based in Heidelberg West, Preston and Reservoir. Nazi scum fuck off! Contact us at [email protected]”. They got stickers if you want some.

I live in Melbourne, Australia. I like anarchy. I don't like nazis. I enjoy eating pizza and drinking beer. I barrack for the greatest football team on Earth: Collingwood Magpies. The 2021 premiership's a cakewalk for the good old Collingwood.
View all posts by @ndy →
This entry was posted in Anti-fascism and tagged antifa notes, Australia First Party, Azov Battalion, Redfern Aboriginal Tent Embassy, Rezza Antifa, Women for Aryan Unity. Bookmark the permalink.