Disrupt and Dismantle #GoldenDawn November 2014 Tour Down Under [#antifa] 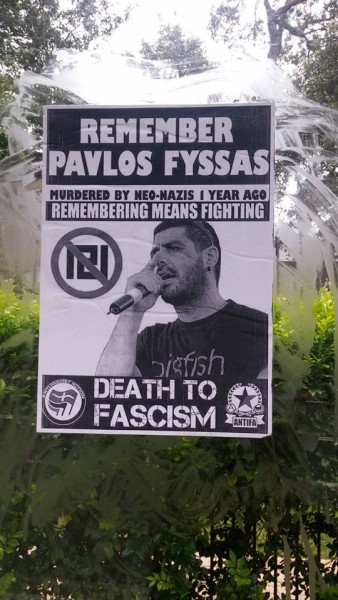 As he did in the US (from which he’s traveling), Epitideois will be attempting to secure financial and political support for the “terrorist”, neo-Nazi Golden Dawn, as well as normalise the neo-Nazi party’s presence in the international political arena.

It’s important for the struggle against fascism in Greece and elsewhere that his tour is unsuccessful.

A call-out to take action against the neo-Nazi tour will be available for distribution in the next few days.

Further details of the tour and the opposition to it will be found on the ‘Disrupt and Dismantle Golden Dawn Welcome Collective’ Facebook page.

The neo-Nazi former NATO general is scheduled to arrive in less than two weeks and it’s time to really get the word out there that if anti-fascists — Greek, Australian, or otherwise — have their way, this tour will be a failure for Golden Dawn and the far right in Australia generally.

From Athens to Brisbane to Sydney and Melbourne:

NO TO GOLDEN DAWN!

I live in Melbourne, Australia. I like anarchy. I don't like nazis. I enjoy eating pizza and drinking beer. I barrack for the greatest football team on Earth: Collingwood Magpies. The 2021 premiership's a cakewalk for the good old Collingwood.
View all posts by @ndy →
This entry was posted in Anti-fascism and tagged antifa, Golden Dawn, neo-Nazism, Yiorgos Epitideios. Bookmark the permalink.