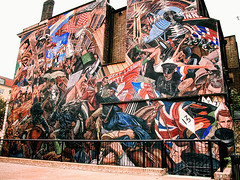 70 years ago, on October 4th, 1936, the people of the East End of London — men, women and children, young and old, “bearded Jews and Irish Catholic dockers” — told the British Union of Fascists to fuck off.

(And black residents of Notting Hill did it again in 1958.)

They built barricades from paving stones, timber and overturned lorries. Women threw the contents of chamber pots on to the heads of policemen and children hurled marbles under their horses and burst bags of pepper in front of their noses.

Next Wednesday [October 4th] marks the 70th anniversary of the day that Jews, communists, trade unionists, Labour party members, Irish Catholic dockers and the people of the East End of London united in defiance of Sir Oswald Mosley‘s British Union of Fascists and refused to let them march through their streets.

Shouting the Spanish civil war slogan “No pasaran” – “They shall not pass” – more than 300,000 people turned back an army of Blackshirts. Their victory over racism and anti-Semitism on Sunday October 4 1936 became known as the Battle of Cable Street and encapsulated the British fight against a fascism that was stomping across Europe.

Mosley planned to send columns of thousands of goose-stepping men throughout the impoverished East End dressed in uniforms that mimicked those of Hitler‘s Nazis. His target was the large Jewish community.

The Jewish Board of Deputies advised Jews to stay away. The Jewish Chronicle warned: “Jews are urgently warned to keep away from the route of the Blackshirt march and from their meetings.

“Jews who, however innocently, become involved in any possible disorders will be actively helping anti-Semitism and Jew-baiting. Unless you want to help the Jew baiters, keep away.”

The Jews did not keep away. [“Anarchist!” Herzl shouted. “Bourgeois!” replied Lazare.] Professor Bill Fishman, now 89, who was 15 on the day, was at Gardner’s Corner in Aldgate, the entrance to the East End. “There was masses of marching people. Young people, old people, all shouting ‘No Pasaran’ and ‘One two three four five – we want Mosley, dead or alive’,” he said. “It was like a massive army gathering, coming from all the side streets. Mosley was supposed to arrive at lunchtime but the hours were passing and he hadn’t come. Between 3pm and 3.30 we could see a big army of Blackshirts marching towards the confluence of Commercial Road and Whitechapel Road.

“I pushed myself forward and because I was 6ft I could see Mosley. They were surrounded by an even greater army of police. There was to be this great advance of the police force to get the fascists through. Suddenly, the horses’ hooves were flying and the horses were falling down because the young kids were throwing marbles.”

Thousands of policemen were sandwiched between the Blackshirts and the anti-fascists. The latter were well organised and through a mole learned that the chief of police had told Mosley that his passage into the East End could be made through Cable Street.

“I heard this loudspeaker say ‘They are going to Cable Street’,” said Prof Fishman. “Suddenly a barricade was erected there and they put an old lorry in the middle of the road and old mattresses. The people up the top of the flats, mainly Irish Catholic women, were throwing rubbish on to the police. We were all side by side. I was moved to tears to see bearded Jews and Irish Catholic dockers standing up to stop Mosley. I shall never forget that as long as I live, how working-class people could get together to oppose the evil of racism.”

Max Levitas, now 91, was a message runner and had already been fined £10 in court for his anti-Mosley activities. Two years before Cable Street, the BUF had called a meeting in Hyde Park and in protest Mr Levitas whitewashed Nelson’s column, calling people to the park to drown out the fascists. Mr Levitas went on to become a Communist councillor in Stepney.

“I feel proud that I played a major part in stopping Mosley. When we heard that the march was disbanded, there was a hue and cry and the flags were going wild. They did not pass. The chief of police decided that if the march had taken place there would be death on the road – and there would have been,” he said.

Beatty Orwell, 89, was scared and excited. “People were fighting and a friend of mine was thrown through a plate glass window.” 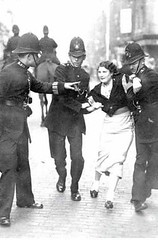 See also : An Anarchist-led Mass Movement in Britain (London Socialist Historians’ review article; “…such traditions of direct action may partially account for their inclination towards greater militancy than the CPGB’s national leadership in episodes such as Cable Street”) and a brief biography of the criminally-neglected Rocker, Rudolf, 1873-1958.

1. A crust discharged from and covering a healing wound.
2. Scabies or mange in domestic animals or livestock, especially sheep.
3.
1. Any of various plant diseases caused by fungi or bacteria and resulting in crustlike spots on fruit, leaves, or roots.
2. The spots caused by such a disease.
4. Slang. A person regarded as contemptible.
5.
1. A worker who refuses membership in a labor union.
2. An employee who works while others are on strike; a strikebreaker.
3. A person hired to replace a striking worker.

I live in Melbourne, Australia. I like anarchy. I don't like nazis. I enjoy eating pizza and drinking beer. I barrack for the greatest football team on Earth: Collingwood Magpies. The 2023 premiership's a cakewalk for the good old Collingwood.
View all posts by @ndy →
This entry was posted in Anti-fascism, History, Music. Bookmark the permalink.