Reds! Under our beds!

Don’t look now but… there may be a Red under your bed! 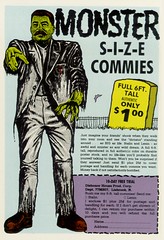 Well… if you reside at RMIT. As the Herald Sun breathlessly reports:

THE leader of the violent S11 protest that left police and horses injured has been made the public voice of RMIT.

1) Glanz wasn’t The Leader; Luther Blissett was, and ‘You’re the Voice’ was his anthem.
2) Yes, the S11 (September 11-13, 2000) protest was violent. Oddly enough, the vast majority of this violence was committed by police.

Making Binnie either a fool or a liar. (Or both.)

David Glanz, who at the weekend also declared his support for the Arab militant organisations Hamas and Hezbollah, is the university’s new media and communication adviser.

He said both groups had the right to resist, and the Federal Government was wrong to outlaw Hezbollah as a terrorist organisation.

The anti-globalisation S11 protesters embarked on a campaign of violence, injuring 100 police and costing the state an estimated $20 million.

In the parallel universe that Binnie inhabits, this may well be the case.

For those of us who dwell on Earth, however, in reality, it was the Herald Sun and other elements of the gutter press (and media generally) that embarked on a campaign of villification of “anti-globalisation S11 protesters” for their allegedly violent intentions many months prior to the protest itself. (Often resorting to some fairly bizarre, perhaps — barring the presence of a saboteur among the ranks — unintentionally hilarious, allegations: I’m still waiting on that plane full of British anarchists to arrive!)

This campaign of villification built on the knowledge police and other authorities in the US acquired at a similar protest — ‘N30’ in Seattle in 1999; that is, just 10 months prior to ‘S11’. It was a product, in part, of a PR campaign on behalf of the WEF, but more generally, was simply a reflection of the corporate media’s systemic function: producing corporate propaganda.

And unfortunately, while levels of media ownership in Australia are already highly concentrated, they’re only going to get more so — with the full support of the Federal Government, natch.

A completely unsupported allegation, one contradicted by the Ombudsman’s report, but one which functions to place participants in S11, and any potential sympathisers, on the defensive.

(The Ombudsman’s Report (June 2001), is naturally a whitewash, but is still valuable, if only for the way in which it exposes the state’s strategic response to political protest; Dr. Bernard Barrett’s ‘Beating Up : Report on Police Batons and the News Media at the World Economic Forum, Melbourne, September 2000’ is a far more reliable and nuanced account.)

This allegation also helps to obscure the fact that the subject of the protest — the World Economic Forum, its role in promoting neo-liberalism and, most importantly, the effects the implementation of such doctrines are having in Australia — has not, and will not, be discussed.

Instead, what we get is injured police and their horses, “urine bombs, metal screws, marbles, glass and steel nuts”.

Mr Glanz last night refused to distance himself from the protest.

“The S11 protest involved some 20,000 people from all walks of life in overwhelmingly peaceful protest against globalisation, privatisation and corporate greed,” he said.

(And I mean, the hack in question could just as easily have written that ‘Mr Glanz last night said that, despite violent police intimidation, he continued to support the campaign for social justice’.)

“I witnessed police officers clubbing protesters over the head, causing severe injuries. Protesters are still waiting for an apology.”

Mr Glanz has been actively involved with the radical International Socialist Organisation, which has advocated assassinations, blowing up military targets and tearing up the roots of the capitalist system.

So, Glanz is a member of the ISO.

I wish him a speedy recovery.

But as far as I’m aware, the ISO is a legal organisation, and always has been. No member has been convicted of terrorist offences, and the party does not advocate terrorism. Instead, it advocates the construction of a revolutionary party of the working class, a party which — according to the, what? 50 — 100? members — will lead the working class to socialist revolution (by which term is meant the capturing of state power by the workers’ party and the subsequent imposition of a dictatorship of the proletariat).

In short, Orthodox Trotskyism, albeit of the ‘Cliffite’ variety.

Leaving aside the fact that their interpretation of what it means to ‘tear up capitalism by the roots’ is radically flawed, as for the ISO having “advocated assassinations, blowing up military targets and tearing up the roots of the capitalist system”… it has? I don’t recall them ever having done so. (Advocating the assassination of whom? The blowing up of which military targets?).

When asked if he still supported this view [ / beat his wife], Mr Glanz said yesterday: “Individual acts of terrorism do not advance the campaign for a world free of injustice, poverty and war.

“I mourn the innocent 3000 people who died in the US on September 11, 2001, but their fate did not justify the death of tens of thousands more in Afghanistan and Iraq.”

Which is actually not an unpopular opinion, nor an unreasonable line of argument.

This may explain why it’s shared by a broad cross-section of the population, many of whom would rightly be surprised if informed that their views were ‘extremist’.

RMIT has been linked several times to the S11 protest.

So has the Herald Sun.

In 2000 it announced a radical social action course in which S11 organisers would lecture on their tactics during the rally against the World Economic Forum.

Huh. So like, seven years ago, when S11 was actually taking place, RMIT, as part of a ‘radical’ social action course (?), invited a number of S11 organisers to talk about the protest to a classroom audience, comprised of students who had an interest in studying forms of ‘social action’?

The course was to evaluate protest methods, media manipulation, the use of cyberspace for organisation and propaganda, and the creation of alliances between community, church and radical groups.

An RMIT spokesman said its Community Advocacy Unit did not support the S11 protest or teach demonstration techniques. 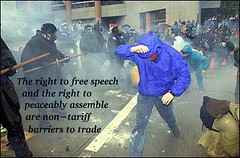 While many people consider Mr Glanz to hold extreme views, he is a man with a conscience.

Many people consider Collingwood to be supported by people who hold extreme views.

He has been involved in a wide range of causes and groups including Brunswick Against Nazis [Campaign Against the Nazis], Save Albert Park and the campaigns for the Richmond Secondary College and against Nike’s use of cheap labour.

…In the meantime… what does any of this have to do with his role as Media & Communication Advisor?

Mr Glanz worked for the Herald Sun in the 1990s.

Aaaaaahhh… now I get it.

STATE Health Minister Bronwyn Pike is at the centre of an anti-semitism storm after her son called for Israel to be dismantled.

He has also called for the US to be thrown out of the Middle East.

Ms Pike yesterday distanced herself from her son’s comments, saying everything should be done to enable Jewish and Arab people to co-exist in peace.

But the outburst from her 27-year-old Socialist Alternative son has provoked outrage in Victoria’s Jewish community.

In his email, Mr Coats said: “It is not racist in any way to name Zionism as the foul, racist, militaristic ideology that it is.

“If you support Zionism, you are no better than a supporter of apartheid South Africa.

“There can be no peace without justice, and that means the dismantling of the racist Zionist state.

“Of course, this means chucking the US out of the Middle East too.”

Yeah well, he would eh? I mean, it is, quite literally, his job.

A spokesman for Ms Pike said: “As any parent knows, their sons and daughters will often form views that differ from those held by their parents.

“Bronwyn believes both the Jewish and Arab peoples have the right to live in the Middle East and we should be doing everything we can to promote their peaceful co-existence.”

When asked about his email, Mr Coats said: “I stand by my convictions.”

Yeah… but where’s the “storm”? The only recorded response to Coats’ email is Lapkin’s: “despicable” and “moronic”.

And why should Bronwyn Pike be at the cente of it?

They’re Paul Coats’ views, not hers.

Finally, why should a call for the dismantlement of a racist institution — in this case, the state of Israel — be regarded as necessarily anti-Semitic? If “Israel [is] no better than apartheid South Africa”, surely it should be dismantled; and its dismantlement justified on anti-racist principles.

The view that ‘contemporary Israel’ = ‘apartheid South Africa’ is not one shared by Lapkin or the AIJAC. Coats’ description of Zionism as being “foul, racist and militaristic” is also not one shared by Zionists, obviously, and a judgement of this sort is, equally obviously, bound to be regarded as controversial by the editors of the Herald Sun. Still, the real ‘hook’ lies not in the fact that such views are held by a left-wing student, but that the student in question is the son of a politician, and has expressed his otherwise unremarkable opinion at a time when Israel is at war — a war which the Australian Government supports… and which we must too. 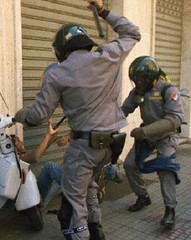 I live in Melbourne, Australia. I like anarchy. I don't like nazis. I enjoy eating pizza and drinking beer. I barrack for the greatest football team on Earth: Collingwood Magpies. The 2021 premiership's a cakewalk for the good old Collingwood.
View all posts by @ndy →
This entry was posted in !nataS, Media, Student movement, Trot Guide, War on Terror. Bookmark the permalink.