Aryan Superman Kyle Chapman has been very busy drumming up publicity for ‘Right Wing Resistance New Zealand’, his latest attempt to manufacture a political vehicle that will propel him to the commanding heights of the Kiwi state. Dear Leader’s latest stunt involves invoking the idea of boneheads on rubber dinghies warding off “Indonesian people smugglers” from landing in Hobbiton. While some — including his enimies in The Controlled Media — have scoffed at the image of the neo-Nazi Mormon as New Zealand’s version of Admiral Chris Barrie in a bargain basement Operation Sovereign Borders, if his intention was to grab a little attention then Chapman has more-or-less succeeded. 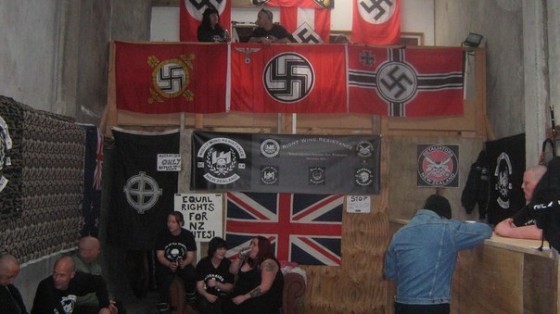 In any case, the gauntlet has now been thrown at the feet of German-Australian nazi warrior Welf Herfurth, who can surely assemble some boys to go on a boat on Sydney Harbour to stop all those New Zealanders from colonising Bondi. Note that one of Herfurth’s latest bone-headed recruits is Bradley Trappitt. You may remember Bradley from such exciting political pranks as “Welcome to Suleymaniye Mosque!”, and “Combat 18”. 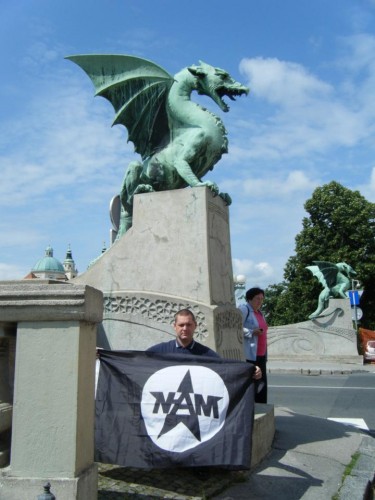 First, a Swedish ex-bonehead named Robert Orell is in town, meeting with ZOG. You can read what the former wanna-be fuehrer has to say about stuff on Reddit here. Note that this year marks the 20th anniversary of the Swedish national anti-fascist network Antifascistisk Aktion.

From November 14-22, Robert will be sharing his experiences while visiting Sydney, Melbourne and Perth as a guest of All Together Now, in partnership with the Australian Attorney-General’s Department and PAVE (People Against Violent Extremism).

PAVE is one of a number of international projects aimed at combating ‘violent extremism’, typically defined as emanating from the far right or Islamist groups. The US franchise was opened in April 2012 and the project appears to have gathered considerable support, not least from Google:

Google has backed a project to link up former terrorists and former violent radicals online, in an effort to combat extremism worldwide.

It is planned that more than a thousand reformed Islamic, far-right, far-left and other extremists will collaborate on counter-radicalisation via the new network, “Against Violent Extremism”. Victims of terrorism will also participate, including Jo Berry, the daughter of the Conservative MP Anthony Berry, who was killed in the IRA Brighton bombing in 1984. The hub of the network is a new website, allowing members to exchange ideas on fundraising, policy-making and research. Google is involved via its own think tank, Google Ideas, which is funding AVE for two years initially. The web giant has previously been criticised by politicians in Britain and the United States for hosting extremist propaganda on YouTube, its video sharing website, including as the sermons of Anwar al-Awlaki, a senior al-Qaeda cleric, who killed by a US drone strike last year. The criticism helped prompt a major clean-up effort last year. Google said it had removed 135 videos for “national security” reasons in response to government requests.

Robert Orell, a former far-right extremist who now runs EXIT Sweden, an organisation countering neo-Nazi ideology, said private sector involvement would be helpful. “If you are trying to counter extremism but you are too close to the Government you are too close to what many extremist groups see as the enemy,” he said. “Large corporations can be seen as the enemy too, but not to the same extent.” In Britain, charities involved in the Government’s ‘Prevent’ counter-terrorism strategy were seen as tools of state surveillance by some Muslims. Sasha Havlicek, Director of the Institute for Strategic Dialogue, the London-based think-tank that will manage the online network, pledged it would not be “another talking shop”. “For instance, a youth worker could post a request for a thousand Euros in funding to pay the rent on their office for a few months and if a donor is interested they can connect through the website. Or a community group might be looking for help in organising a social media campaign, which could be picked up by a tech company in Silicon Valley.”

Mr Orell said that organisations fighting extremism had fallen behind in the battle of ideas online. Cases such as Anders Breivik, the far-right mass killer currently on trial in Norway, have showed how those with radical views are able to network and air their views unchallenged. “We definitely need to catch up,” said Mr Orell. Extremists are very efficient at networking online.” Tim Stevens, of the Centre for Science and Security Studies at King’s College London, said Google has been under pressure from both governments and private lobbies, such as Jewish groups, over extremism online. “On the face of it, this network looks like a good idea,” he said. “But Google will need to be careful about being drawn into such a highly-politicised area.”

Secondly … shit? What was second? I forgots. Maybe I’ll come back to it later. Leave a comment if you care (which you don’t). Final notes:

Somewhere in Greek police HQ there's a computer program generating names of terror orgs. I think it's based on a Monty Python algorithm.

This year was also the 40th anniversary of the Polytechnic uprising of November 17 [Athens | Thessaloniki]. The week prior antifa in London burned a Golden Dawn flag kindly donated by some of their supporters, presumably at some point “after the sense of shear fear on their faces” had been replaced by the recognition of beta things todo in their bRanes.

I live in Melbourne, Australia. I like anarchy. I don't like nazis. I enjoy eating pizza and drinking beer. I barrack for the greatest football team on Earth: Collingwood Magpies. The 2023 premiership's a cakewalk for the good old Collingwood.
View all posts by @ndy →
This entry was posted in Anti-fascism and tagged antifa, antifa notes. Bookmark the permalink.