Mick Armstrong on Melbourne G20 protests, November 2006 [A Blast From The Past]

Yo Gabba Gabba wrote me to say he couldn’t find Socialist Alternative leader Mick Armstrong’s statement in response to a disturbance at an anti-G20 rally in Melbourne in November 2006. Given also the recent stoopid regarding the G20 meeting in Brisbane next year, I thought I may as well throw it up again here. There’s quite a few posts on the subject of the G20 elsewhere on the blog, especially in the aftermath of the Melbourne G20 protests and the police and media campaign against troublemakers which followed. It’s especially noteworthy that, over seven years later, The Age still publishes a series of photos given it by police of ‘Persons of Interest’ under the title ‘G20 riot suspects unmasked’ (Persons of Interest is also the title of a new documentary on ASIO which I’m yet to see).

Anyway, over to Mick: 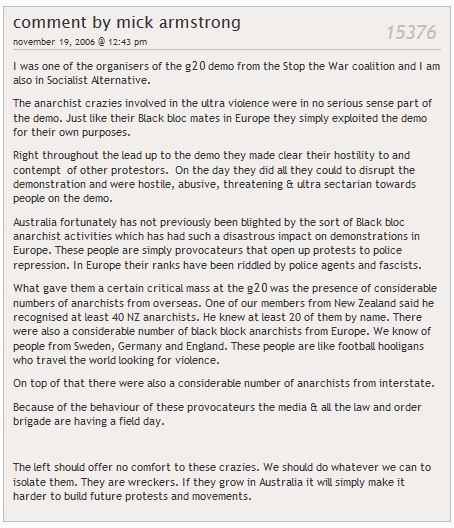