Following on from the earlier decision by three Justices of the NSW Supreme Court not to allow three (suspected) terrorists to walk along certain streets in Sydney comes this further blow for Truth, Justice and the American President’s Right-of-Way:

As the APEC protest in the heart of Sydney wound down without major incident, one activist was receiving what he regarded to be more than his fair share of police attention. Chris Ward took a wheelie bin converted into a stereo to the march — and the contraption caught the attention of the gathered security forces. “I’ve been searched three times today for having a wheelie bin sound system,” Mr Ward said. “As you can see, there’s [nothing] in it but speakers, an amplifier and a battery.” Mr Ward says he was searched for half an hour on each occasion, and once extra police had to be called in after a crowd of activists surrounded the search team.

Police within the Sydney CBD have special APEC powers which allow them to detain and search anyone without cause. Dale Mills, a “Human Rights Monitor” present at the march, described the search as an overreaction. “In my opinion, that was just an illegal search,” Mr Mills said. “That’s the sort of aggressive attitude … that provokes problems at protests.”

Still, while the protest as a whole was characterised by the absence of any physical confrontations with police, converting Tinsel Town into Pig City has had the inevitable consequences: for others. At this stage, perhaps 17 or 18 individuals have been arrested by police, and charged with the usual assortment of infractions, none of which have, to this point — and despite the mountains of propaganda spewed forth by the police / state and ideological state apparatus — involved the rape and/or murder of large numbers of innocent civilians. (Unlike, say, the War on Terror™. In Iraq. Or Chechnya. Or by way of the Chinese occupation of Tibet. Or…) Or as riot squad commander Steven Cullen told Sydney’s Supreme Court: “Police lines will come under attack”. As it happens, the closest this came to being true was the apparent use of a dart and an iron bar, by one protester, against one member of the rent-a-mob.

According to Evelyn Yamine in The Daily Terror (Rioter ‘threw dart at skull’, September 10, 2007), a 40 year-old named Gavin George Begbie “is facing 12 charges over the alleged attack on police officers in Sydney during Saturday’s demonstrations”; namely, he “threw a metal-tip dart into a police officer’s skull before attacking other officers with a metal pole”. Maybe Gavin thought the police officer in question was a member of The Village People?

There is a lot of intellectual waffle used in this tiresome campaign to try to get the average citizen to accept the idea that it is normal, even acceptable, for gays to marry and have children. I’m sure that most people would agree that there is in fact something very fundamentally wrong with this idea. If asked, I’m sure that they would say that on an intuitive level those who also harbour these ideas are bordering on mental disturbance.

No doubt more details of this offence will emerge as police proceed to feed the waiting chooks.

Note that Cullen claimed that the prospect of chaos on the streets of Sydney was what justified the police application to the courts — smugly agreed upon by the three liberal Justices — to prevent a number of citizens from attending today’s protests without being immediately arrested. Alex Bainbridge, spokesperson for the DSP’s Stop Bush coalition — obviously not a big music fan — is reported to have praised police for their conduct:

Mr Bainbridge said protest organisers did not take issue with the way police conducted themselves. “On the whole, we don’t have big problems, but we think the security operation which today they were a part of, has been exaggerated and overblown.”

Mr Scipione said he was not aware of any issue with police failing to wear ID badges, as had been alleged by some protesters. No direction had been given for them not to wear ID, but it was something that would be looked into, Mr Scipione said.

Which is the standard li(n)e used by police, for whom this has become standard practice at any event at which they may decide to employ violence and to assault The People What Cause Unrest (AAP, Police show force at APEC, 17 arrests, Sydney Morning Herald, September 8, 2007).

Finally — and rather oddly — Miranda Devine, of all people, recounts the rather extraordinary “FORCIBLE arrest, handcuffing and jailing of a respectable, bespectacled, middle-aged accountant in a Hawaiian shirt” (Pumped-up cops are stepping over the thin blue line, Sydney Morning Herald, September 9, 2007) which is worth reading, especially for this line: ‘You can see police dragging Greg face-down onto the footpath. One is yelling: “Stop resisting! Stop resisting!”‘

Devine a critic of police brutality? Hardly. “Greg [the accountant/terrorist in question] and [his missus] Sophie are my friends of 14 years. My husband and I are godparents to their daughter, Isadora, 3.” 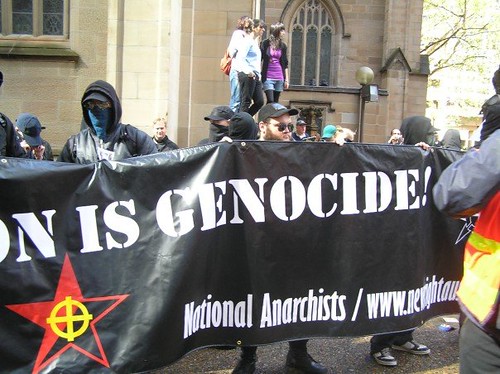 In an ironic twist (that will be completely lost on the hacks working for the state and corporate sector), the only mob threatening or — more precisely — playing on the spectre of violence, was a small group of fascists dressed as ‘anarchists’, who took advantage of the absolutely massive police state presence to carry banners reading ‘Australia, Free Nation or Sheep Station?’, ‘Globalisation is Genocide!’ and ‘Power to the People — Not Political Parties’ and to look — as the Very Reverend Monsignor Geoffrey Baron might say — like sfools.

Thus, in addition to attracting somewhere between 3 and 10,000 people to the rally and march organised by the leftist Stop Bush coalition, in Sydney this morning the APEC summit also attracted a small number (between 20 and 30) of neo-Nazis. The fascist mob was tightly formed, dressed in black, and their clothing was intended to disguise their faces. In other words, the fascists formed a small ‘black bloc’. On Stormfront, a poster writes that:

I was just sent this PM by someone who claims to have been at the APEC demo as part of the [New Right] contingent:

“[N]one of us were arrested. [T]he police surrounded us not because we were a threat, but to protect us from the sea of [M]arxist sewerage around us. We co-operated with police instruction[s] at all times and we left as they brought up the riot squad and the water cannon because the red scum were causing trouble further up in the march.

I tell you the truth, we hurt them more today just by being there [than] any amount of physical confrontation. It was like one of those old horror movies when somebody sprays a vampire with holy water[;] they were foaming and writhing because of us, because our cause is righteous.

At one point they started chanting about fascists or something, so we chanted back, calling them [N]azis[. T]his had them most confused[;] they stared us with a vacant, [slack-jawed] look and had to retreat and started chanting further away from us.

There were so many people we wanted to hit today, but everybody ignored their childish provocations[. W]ell done to those who attended and congratulations to the New Right for organising this ground-breaking step forward in Australian Nationalism.”

At the start of the march, police became concerned when a group of anarchists clashed with neo-Nazi protesters who had gathered at the back of the kilometre-long protest gathering in the heart of the city. Rows of police were ordered to surround the neo-Nazis and told to arrest anyone who acted violently.

In the Sydney Morning Herald, Danielle Teutsch and Daniel Dasey state (Protesters no match as police rule streets, September 9, 2007) “A group of about 20 black-garbed men were separated from the rally by police after protesters accused them of being neo-Nazis intent on provocation.”

So, hardly an unmitigated triumph — the neo-Nazis were soon sussed — but still a success as far as the New Reich / Notional-Anarchists are concerned. After all, they managed to use the platform provided by the protest to announce their existence to the world (as far as I’m aware, this is their first organised attendance at a public protest) and to escape unscathed, job done. Whether or not this ‘intervention’ will mean others begin to pay them any more attention is difficult to say. I suspect not. On the other hand, I think, especially given the near-total collapse of the Australia First Party, the group will quite possibly attract more support from existing elements of the far right, and come to constitute an early twenty-first century version of National Action, and to fill the same niche NA did in terms of constituting an extra-parliamentary radical right-wing organisation. The ‘left’ in Sydney, meanwhile, will most likely remain inactive and largely clueless, at least until such time as they believe themselves standing more to gain from confronting the neo-Nazis than they do to lose.

Business as usual, in other words.

See also : APEC protests: Richard’s observer’s report, Webdiary, September 8: “The Australian Police are tonight saying that they averted violence. Actually they attempted to create it. I think their ultimate aim was to clear a public park of happy celebrants of democracy before the Chinese convoy retired to the pub across the road from Hyde Park…” Listen to : The Zimmermen, ‘Don’t Go To Sydney’ (Au-go-go, ANDA 41, 1985).

And speaking of business…

INTERSTATE prostitutes were brought into Sydney to help service the 300 per cent spike in brothel business during APEC, the Adult Business Association (ABA) says. APEC-themed specials on offer at Sydney brothels included the Condi Combo, the UN Duo and the Presidential Platter. “It’s been going gangbusters,” NSW spokesman for the ABA Chris Seage told Fairfax newspapers. “Businesses that were banking on a 200 per cent increase in business have done better than that with it up by 300 per cent. “There have been secret service agents, trade envoys, but no Putins yet.” Mr Seage said suburban brothels were also getting extra work from locals deciding to stay closer to home during APEC.

I live in Melbourne, Australia. I like anarchy. I don't like nazis. I enjoy eating pizza and drinking beer. I barrack for the greatest football team on Earth: Collingwood Magpies. The 2021 premiership's a cakewalk for the good old Collingwood.
View all posts by @ndy →
This entry was posted in !nataS, Anarchism, Anti-fascism, Sex & Sexuality, State / Politics, War on Terror. Bookmark the permalink.