The decision by Melbourne Knights to allow their facilities to be used, on Saturday, October 13, by the local branches of two international neo-Nazi organisations (Blood & Honour (B&H) and the Hammerskins) in order to hold a gig is a step backwards, both for the club, and for the image of football in Victoria. It also contradicts the general aims and principles upon which the game is meant to be conducted.

The recent assault on a Jewish teenager in Melbourne — by a pair of racist bogans armed with baseball bats and blonde mullets — prompted a more extensive AAP article on anti-Semitism in Australia, Anti-Semitism ‘reaching scary levels’ (The Age, August 23, 2007). The impetus for the article was presumably provided by the fact that the bashing followed on from the widely-publicised assault on Jewish businessman Menachem Vorchheimer last October (by a number of incredibly brave Ocean Grove footballers), and racist Internet postings made in August by some other terrifically sporting cricketers from McKinnon. Note that, to its credit, McKinnon Cricket Club appears to have responded much more positively to the racist commentary (allegedly) made by some of its senior members than Ocean Grove Football Club did in relation to the racist abuse and assault of Vorchheimer: in the immediate aftermath, club coach Matthew Sproule denied any wrongdoing on the part of his boys. (The situation was further complicated by the involvement of an off-duty policeman in the incident.)

The recent commentary by the Minister for Immigration and Citizenship, Kevin Andrews, regarding the supposed inability or reluctance of African immigrants — and those from Sudan in particular — to ‘integrate’ into Australian society sparked much, er, reflection. So too, did the recent murder of one of those immigrants, 19 year-old Liep Gony, and the bashing of another, 17 year-old Ajang Gor. 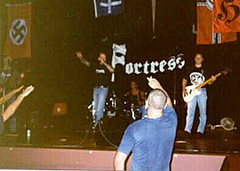 Naturally, in keeping with their ideology (and in addition to ZOG), much of the anger of Blood & Honour and the Hammerskins is directed at blacks. In the US, for example, Hammerskins have murdered a number of black people, and assaulted numerous more. Further, partly because of its racist, fascist views, Blood & Honour has been outlawed in Germany and Spain, and its banning is under consideration in Belgium and Holland.

In Australia, on the other hand…

During the course of the last ten years, B&H and the Hammerskins have been provided with a venue by the management of an inner-city pub in Melbourne called The Birmingham Hotel. As a result of the negative publicity surrounding the exposure of the pub’s role in doing so, however — and despite the vocal support of a small number of local, right-wing nationalist fashion punks and skinheads — these neo-Nazi groups have this year been forced to look further afield for a venue willing to stoop to their level, and unfortunately it appears that they have found one in the Melbourne Knights Football Club. Exactly why this is the case is unknown at this stage, but presumably there are elements within the Club only too happy to cater to fair dinkum neo-Nazis, and these organisations in particular which, over the course of the last twenty years, have a string of violent criminal activities to their credit. And now the Melbourne Knights, to their er, credit, may boast of having hosted these organisations.

I wonder what the football federations think?

See also : One-Nil by Mouth : Is it ever wrong to hit a bigot?, Steven Wells, Philadelphia Weekly, October 10, 2007 (“[Eric] Cantona’s defining moment came when he reacted to a fan shouting, “F*** off back to France, you French motherf***er!” by attempting to drop-kick the swine in the chest and then punch his head off. The media were outraged. “You would have thought that the pope had been gang-raped by aliens,” wrote [one] soccer writer… But when it turned out the abusive fan had attended neo-Nazi rallies and had been convicted of attacking a Sri Lankan-born immigrant with a 3-foot spanner, all right-thinking people applauded Cantona as an anti-racist hero. “It’s very ironic that it took a white Frenchman to bring home to the nation the issue of racism in football,” said black British soccer player John Barnes…) | Mussolini Headkick : Materazzi Headbutt? | kickitout | FARE…

We want to see the ‘beautiful game’ played without the cancer of racism. Football is the biggest sport in the world and belongs to us all. It should be the right of every person to play, watch and discuss freely, without fear.

Unfortunately, at all levels of the game, from amateur to international, there are incidents of racism. Be it from fans, players, clubs or other football bodies, FARE believes that such behaviour, on and off the field, is unacceptable and unwanted by the majority of fans and players.

FARE aims to rid the game of racism by combining the resources of anti-racist football organisation throughout Europe. It helps to support and nurture groups and coordinates efforts on an European scale. By working together, FARE helps organisations share good practice and present a united front against racism in football.

I live in Melbourne, Australia. I like anarchy. I don't like nazis. I enjoy eating pizza and drinking beer. I barrack for the greatest football team on Earth: Collingwood Magpies. The 2020 premiership's a cakewalk for the good old Collingwood.
View all posts by @ndy →
This entry was posted in Anti-fascism, Collingwood, Music. Bookmark the permalink.