White Nationalism Goes To The Polls

The 2010 Australian federal election is just a few days away, and while most eyes are on Labor, the Coalition and the Greens, there’s a range of other parties hoping to use the occasion to promote their agenda. Among these parties are a small number on the racist right-wing: the Australia First, Australian Protectionist and One Nation parties.

Below is a brief summary of their candidacy.

Founded by former Labor MP Graeme Campbell in 1996, the Australia First Party has undergone a number of ups and downs in its short life, its initial Sturm und Drang stolen from it by a red-haired fish ‘n’ shop owner from Queensland. In 2001 it underwent something of a revival when veteran fascist Dr James Saleam joined the NSW branch, became its Secretary, and began reconstructing the party on a more systematically right-wing basis. The party split in mid-2007, with Saleam becoming its undisputed leader. In 2009, Saleam was the subject of an extensive profile in the Good Weekend (‘The Audacity of Hate’, September 26/27, 2009), one which — notwithstanding Saleam’s numerous objections to its alleged inaccuracies — provides a rather damning portrayal.

While it has participated in numerous elections before — its only success being the election of Bruce Preece to local council in Adelaide — 2010 is only the second that AF has contested since re-registering with the Australian Electoral Commission, and the party is standing just a handful of candidates in NSW, QLD and VIC. In NSW, its candidates are Tony Pettitt in Greenway and Mick Saunders in Lindsay. In QLD Peter Schuback and Nick Maine are running for the Senate, while in Victoria Alex Norwick is standing for the seat of Deakin.

None are expected to gain more than a handful of votes.

Formed as a split from AF in 2007, the APP is currently unregistered, and is standing just two candidates in NSW for the Senate: party leaders Darrin Hodges and Nick Folkes. Hodges unsuccessfully stood for local council in 2008, while this appears to be Folkes first electoral contest. Hodges is a former member of AF, while both men are reputed to be former Liberals. The pair took part in a small rally in Newtown last weekend, but received a hostile response from locals. The APP’s principal concern is getting rid of Muslims, but it otherwise expresses a routine form of white nationalism, albeit one which veers between an assimilationist and rejectionist model.

The One Nation party — best known for its earlier association with The Wicked Witch from Ipswich, Pauline Hanson — is a shadow of its former self, having undergone a sudden rise in the late 1990s, and an equally sharp decline in the early 2000s. The party lost its last MP, Rosa Lee Long, in the 2009 Queensland state election. While the party may be down it’s not gone, however, and is fielding candidates in NSW, NT, QLD, SA, VIC and WA.

In NSW, ON is putting up patriots in a total of fourteen (14) Lower House seats: Banks, Bennelong, Blaxland, Chifley, Cook, Hughes, Hunter, Kingsford Smith, Macarthur, New England, Paterson, Riverina, Robertson and Shortland. In NT it’s standing someone for the seat of Solomon. In SA, ON is contesting Makon and Sturt, in QLD Bowman, Fadden and Wide Bay, and has thrown up just the one candidate in Moore, WA. The party is also taking part in Senate contests in each of the mainland states.

Of the few dozen aspiring ON politicians, a handful are noteworthy. One is Kate McCulloch, the ON candidate in Macarthur. Briefly coming into the media spotlight during the course of a campaign against the construction of an Islamic school in Camden, it remains to be seen if she really is the Great White (Red Haired) Hope. More recently, the President of ON in Victoria, John Groves, has informed the world of his love of ‘Phoofter Bashing’ and his passionate hatred of Jews, the former comment prompted by Family First QLD Senate hopeful Wendy Francis comparing gay parenting to child abuse.

Another ON candidate (Riverina) who has gained some small degree of notoriety is Craig Hesketh, the party’s NSW publicity officer. Hesketh has received the official endorsement of AF, as he is a ‘nationalist’ and because he “has rightly spoken out against the refugee invasion of our country”. Quite strongly, too. On Facebook, Hesketh denounced “race traitors” and “immigrant whores”: 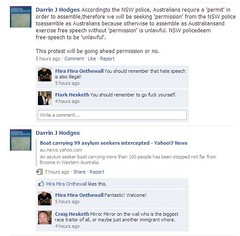 While he describes the Greens as “sick f*cks”:

On the other hand, as Hesketh noted in response to homophobic sentiment allegedly expressed by Nationals candidate Michael McCormack, “I think we’ve all said something [we’ve] regretted at some stage”.

I live in Melbourne, Australia. I like anarchy. I don't like nazis. I enjoy eating pizza and drinking beer. I barrack for the greatest football team on Earth: Collingwood Magpies. The 2023 premiership's a cakewalk for the good old Collingwood.
View all posts by @ndy →
This entry was posted in Anti-fascism, State / Politics and tagged Australia First Party, Australian Protectionist Party, Craig Hesketh, One Nation. Bookmark the permalink.