[This post was made possible by contributions from Anonymous, HS and PS. As of this date, the main Hammerskins site hammerskins.net is down but the Southern X Hammerskins site is up. Wade Michael Page’s record label, Label 56, has also been restored to Facebook. See also this xclnt post by Rose City Antifa: Wade Michael Page, The Hammerskin Nation, and Pacific Northwest Neo-Nazis, August 16, 2012.] 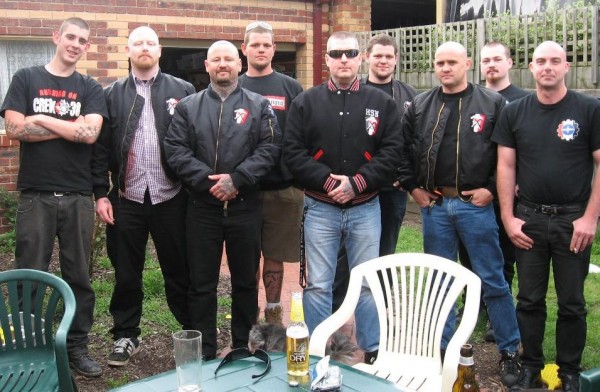 Above : Members and supporters of Southern Cross Hammerskins in Melbourne. A pseudonymous commenter claims that Kenneth Stewart (centre) has since left the organisation.

Given the horrible and spectacular nature of his crime (as well, of course, as its target and location), Wade Michael Page has managed to generate a massive amount of media reportage in the last week. And despite being of varying quality, this commentary is probably never quite as bad as his music — which is pretty damn bad.

As for his status as a neo-Nazi, it now seems certain that Page was a member of the organisation of boneheads known as ‘Hammerskin Nation’, becoming a full member of the Northern Hammerskins in October 2011 — less than a year before he went on his shooting rampage in Wisconsin.

While having the centre of its activities and most of its members there, the Hammerskins, established in the late 1980s, are not an exclusively US phenomenon. Rather, in addition to six regional chapters in the US (Confederate, Eastern, Midland, Northern, Northwestern and Western), the Nation boasts franchises in about a dozen other countries. Currently, Hammerskins may be found in Canada, France, Germany (est. 1992), Hungary (2006), Italy, New Zealand, Portugal (2005), Spain, Sweden (2009), Switzerland (1990) and, of course, Australia (1992).

The legal situation of these groups varies.

In Germany, the group is considered to be an unlawful association, though this fact means that it has simply entered into the (far larger) neo-Nazi underground. The Hammerskins have also been outlawed and members imprisoned as a result in both Spain and Portugal. The leader of the Portuguese Hammerskins, Mário Machado, is currently serving a seven-year sentence for coercion, robbery, kidnapping and illegal possession of weapons.

Closer to home, relatively little has been made of Page’s status as a Hammerskin in the Australian media. The Age has republished an AFP report which mentions it, while news.com.au carries a not-very-well-written story by AAP which describes the Hammerskins as “a white power rock music group that idealises those like the Vikings and Nazis whom they consider to have been warriors for the Aryan race”(!). For his part, Matthew Hall has written something on the ‘Australian link to US Sikh temple shooting’, noting, inter alia, that one of Page’s bands, 13 Knots, recorded a split 7″ with Melbourne Hammerskin project Kilgore on German label Wewelsburg, and that another local nazi band, Deaths Head, played gigs with 13 Knots while touring the US.

Hall fails to mention that Page was a Hammerskin.

The failure to make much of Page The Hammerskin is slightly (but only slightly) surprising given the hullabaloo over the Hammerskins’ staging of the Hammered Festival in Brisbane just four months ago and the fact that their chief gathering takes place in Melbourne in less than a month (September 8). In a related vein, on newmatilda.com Suvendrini Perera asks Why Didn’t The Sikh Shooting Rate?.

More broadly, as previously noted, Page’s heroic act has generated vast amounts of media reportage. Some of the more interesting accounts I’ve read include those of a liberal on Gawker who’s written a rather bad article titled ‘In Defense of Neo-Nazi Music’ and Nick R. Martin, who traces in some small detail the violent criminal history of the Hammerskins in Two American Terror Cases, One Brand Of Hate (TPMMuckraker, August 10, 2012).

The Columbus-like discovery of a neo-Nazi subculture has produced some anguished commentary, but the history of such groups is not really that obscure, and neither is the occasionally very close connection between such tendencies and institutionalised state violence, whether in Greece or elsewhere. Martin A. Lee’s 1997 book The Beast Reawakens (Introduction) provides a useful and illuminating account of the ways in which elements of the Nazi regime sought to perpetuate its legacy, often in collaboration with Western powers. In a more contemporary vein, the website of the leadership of the world socialist movement draws links between Page’s rampage and the US military in ‘Wisconsin shooting reveals connections between US military and fascist groups’ (Eric London, August 10, 2012).

J.M. Berger draws further connections between Page, the Hammerskins and the American Front (AF) here; Berger makes reference to the arrests in May 2012 of members of AF in Florida (see : ‘Floriduh, Nazis, and the Goddess Kali’, antifa notes (may 14, 2012)) and the fact that Page’s band Definite Hate played a gig organised by the Hammerskins in March 2011. Page also apparently paid tribute to dead nazi David Lynch.

As I see it, the negative publicity surrounding Page’s shooting spree will not aid the Hammerskins’ public image, but it’s unlikely to do much harm to the integrity of the network as a whole. After all, Page is not the first Hammerskin to have killed. Previously, Hammerskins were convicted of the murder of Donald Thomas in Arlington, Texas in June 1991 and of Douglas Garrett in Birmingham, Alabama in December 1991. Others have been convicted of violent, racially-motivated assault and damage to property (especially that belonging to Jewish institutions). Further, members already understand that they belong to a tiny political minority; their pool of potential recruits is limited to the bonehead subculture, with Hammerskins identifying and cultivating positive relations with those individual men (the Hammerskins are strictly Boys Only) considered most dedicated to White supremacy, and seeking to enroll them in their feeder organisation ‘Crew 38’ (so named in reference to the third and eighth letters of the alphabet; ‘c’ and ‘h’ referring to crossed hammers, the Hammerskins’ insignia).

That said, a decision by US authorities to formally designate the group as ‘domestic terrorists’ would significantly alter this picture,* which helps to explain why the Hammerskins have locked their online forum and why other efforts are being made to distance them from their latest star recruit in Page. This includes the decision by Melbourne-based Hammerskin Jesse to withdraw from sale muzak made by Page he previously sold on his website 9% Productions.

When in December last year I raised concerns over the organisation by local neo-Nazis of a gig at The Tote, and made reference to the participation of Geelong resident Taigen Gould in the band Ravenous, I was angrily informed by one of his friends “Get a life you pathetic scum bag, you do not know these people! They are the kindest people on this planet and I will stand by them through anything!” I now think, given Page’s murderous rampage, it would be difficult for even the most naive of individuals to believe that the Hammerskins are some of the kindest men on Earth — difficult, but certainly not impossible. In any event, the ties between local Hammerskins and their parent organisation are very close, as evidenced by this photograph of Taigen with someone who appears to closely resemble a member of Page’s band Definite Hate… 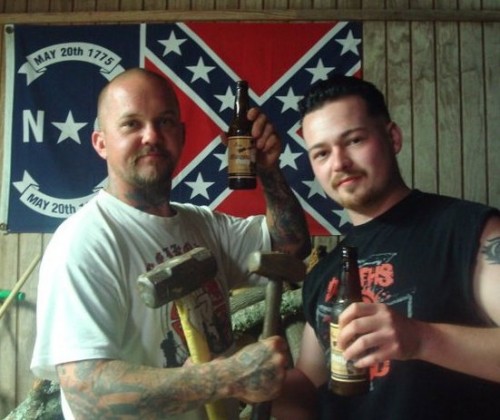 In the US, the nazis who played at Hammerfest 2011 (October 1) were Page’s band Definite Hate and Hungarian boneheads Vérszerződés. According to the FBI informant who infiltrated AF, the gig was held at the Outlaws OMC HQ in Central Florida. A previous Hammerskins gig on St Patrick’s Day (March 19, 2011) took place at a bar called Rat’s Place (or possibly Pat’s Place) in Christmas and starred both Definite Hate and End Apathy (along with Hammerskin Forest Fogarty‘s band Attack). Weirdly, in July 2010 the same informant claimed that Fogarty was preparing to form a new band called ‘Dead Jew’, and that this would involve members of both Cannibal Corpse and Deicide(!). The informant also claims that in September 2010 he was invited by Hammerskin Coby Stonecypher to his house and met with two German members of the Hammerkins — as noted, an unlawful association in Germany — providing further evidence of the international nature of the Hammerskins network. Stonecypher himself is one of the leaders of the Hammerskins in Florida.

The strong links between Hammerskins in that part of the world and the Outlaws is slightly odd given that the Outlaws have chapters in Asia, and fraternisation with non-Whites is usually regarded as strictly verboten by groups like the Hammerskins. In fact, a fight between a Hammerskin and a member of sometime rival group Volksfront took place in 2009 at a meeting of supporters of Holocaust denialist David Irving, seemingly on the basis of this kind of fraternisation (note that Irving has been denied a visa to tour Australia several times in the past, though fellow denialist Paul Fromm has not).

There have been numerous recent confrontations in central Florida that suggest a war is brewing between former longtime allies Volksfront and the Confederate Hammerskins. Michael Lawrence, one of the original founders of the Confederate Hammerskins in 1987, switched his allegiance to Volksfront in 2007, and became the group’s unofficial leader in Florida. Randal Krager, who co-founded Volksfront in 1994 while serving a prison sentence, moved from Portland, Oregon, to Florida with his wife and son to live next door to Lawrence.

Since Lawrence’s defection, his longtime friend and Confederate Hammerskins member, Richie Myers, has steadily gained power throughout the state as the group’s Orlando leader. Myers and his second-in-command, Coby Stonecypher, regularly associate with the Outlaws Motorcycle Club gang. Lawrence and Krager do not. A public indication of trouble brewing between Confederate Hammerskins and Volksfront appeared in a Stormfront posting advertising Volksfront’s annual Martyr’s Day event, to be held this year in Pensacola. The announcement said the gathering was “family friendly [by that we mean no drunks, no non-racial ‘clubs’, no deviate or degrading behavior].” Many readers took that as disapproval of outlaw motorcycle clubs attending recent white supremacist gatherings, which has happened at Confederate Hammerskins events.

In Australia, an agreement between Volksfront and the Hammerskins means that Volksfront — its principal organiser, Chris Smith, blogs as ‘anti-antifa australia’, runs the nazi distro ‘Heathen Noise’ and was convicted of assault and robbery in December 2010 — limits its activities to NSW. Note that, as part of an international day of action against racism and fascism, in Portland, the birthplace of Volksfront, antifascists organised to expose leading members of the group in that city. See : Rose City Antifascists Expose Nazi Neighbors and Coworkers During Day of Action, Call for Community Responses (August 14, 2012).

As for bikies, other OMCs, such as the Hells Angels, appear happy to host neo-Nazi gigs in at least some of their venues (‘The Other Place’), although not without opposition. One such gig in Barcelona in October 2011 was forcefully disrupted by antifa, prompting the intervention of the riot police. (Note that the Hammerskins are outlawed in Spain, and in February, 15 of its members had previous jail terms imposed on them because of their membership upheld by the Supreme Court.)

I live in Melbourne, Australia. I like anarchy. I don't like nazis. I enjoy eating pizza and drinking beer. I barrack for the greatest football team on Earth: Collingwood Magpies. The 2023 premiership's a cakewalk for the good old Collingwood.
View all posts by @ndy →
This entry was posted in Anti-fascism, Death, Music, War on Terror and tagged Southern Cross Hammerskins, Wade Michael Page. Bookmark the permalink.

20 Responses to Wade Michael Page and the (Southern Cross) Hammerskins