Well I was simply going to post some blah on Facebook but then I remembered I had a blog and then I thought hey why not post the blah here?

Mark Zuckerberg asks ‘What have you been up to?’

And the answer is, inter alia, I’ve been laffing at a photo of antifa grandmas in North Dakota (US). Here they’re pictured with a flag they ‘captured’ and subsequently burned. 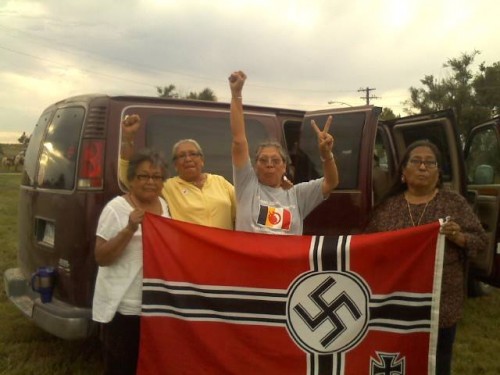 The flag was taken in Leith, ND, where a handful of nazis are trying (against opposition) to establish what’s sometimes termed a ‘Pioneer Little Europe’: basically, a White enclave. Spearheading the effort is a Canuckistanian nazi named Craig Cobb. Cobb was previously responsible for publishing a website called podblanc (founded in April 2007). Since closed, it featured all the usual nazi shite you’d expect, most notoriously, perhaps, a gruesome video titled ‘Execution of a Tajik and a Dagestani’, which documented the murder of two men by a neo-Nazi gang in Russia. (Also involved in the project is the National Socialist Movement, an outfit of Hollywood Nazis whose sole Australian representative was once Carl D Thompson, a former editor of the One Nation newspaper.)

Curiously, podblanc was once heavily promoted, along with a range of other racist, fascist, White supremacist and neo-Nazi propaganda materials, by a local (Sydney-based) White supremacist named Martin Fletcher on his website Down Under Newslinks (aka ‘Australian Nationalist Resource’: “Tracking Non-White Crime and Events Affected by Immigration”). In the intervening years Martin has removed much of this material from his site, and is currently the ‘Vice Chairman and Website Administrator’ for the Australian version of the ‘Party for Freedom’, an anti-Muslim micro-party modelled on Geert Wilder’s Dutch example. Like a number of others who’ve made the transition from blaming The Jew to blaming The Muslim for all of the world’s many problems, Martin has yet to give a satisfactory account of why he found Nazism so appealing.

Another Australian identity associated with Cobb’s project in North Dakota is Paul Innes. For several years Paul was the moderator of the ‘Down Under’ segment of Stormfront, the world’s leading site for White supremacist ideology; currently, moderating duties are shared between the (Melbourne-based) leader of the neo-Nazi groupuscule Nationalist Alternative and some other bloke. Innes got a little police and media attention back in early 2009 for his plans to establish a ‘Pioneer Little Europe’ in the Perth foothills. More recently, police have charged several Perth men for distributing nazi stickers.

Finally, Dr Cam and I have interviewed an anti-fascist activist about the activities of Golden Dawn in Greece (Athens) and Australia (Melbourne); the interview will be broadcast tomorrow on 3CR at 5.30pm.

I live in Melbourne, Australia. I like anarchy. I don't like nazis. I enjoy eating pizza and drinking beer. I barrack for the greatest football team on Earth: Collingwood Magpies. The 2021 premiership's a cakewalk for the good old Collingwood.
View all posts by @ndy →
This entry was posted in Anti-fascism, Broken Windows, History, Media, State / Politics and tagged antifa notes, Craig Cobb, Martin Fletcher, Nationalist Alternative, Party for Freedom, podblanc. Bookmark the permalink.