The Brisbane branch of the Australia First Party (AF) tried to hold a rally, march and picket today in support of their comrades in the Greek Golden Dawn (GD) party. Sadly, despite calling upon every other nazi and White supremacist in Queensland to join them, just a dozen or so racist losers managed to make their way to Musgrave Park … and the rest, as they say, is another embarrassing chapter in the history of AF. 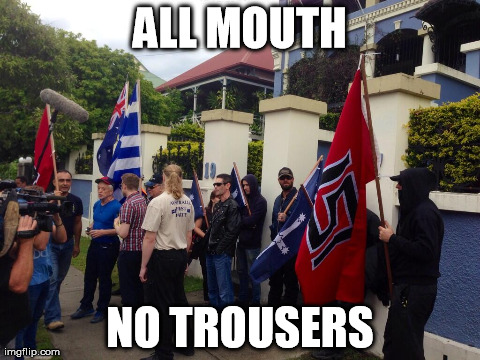 Sincere thanks to all those who helped to ensure that the nazis were unable to rally, march, picket — or do much of anything apart from look like the fools that they are — and that Golden Dawn was treated to a rather bleak morning and afternoon.

I live in Melbourne, Australia. I like anarchy. I don't like nazis. I enjoy eating pizza and drinking beer. I barrack for the greatest football team on Earth: Collingwood Magpies. The 2023 premiership's a cakewalk for the good old Collingwood.
View all posts by @ndy →
This entry was posted in Anti-fascism and tagged antifa, Australia First Party, Brisbane, Chrysi Avyi, Golden Dawn. Bookmark the permalink.