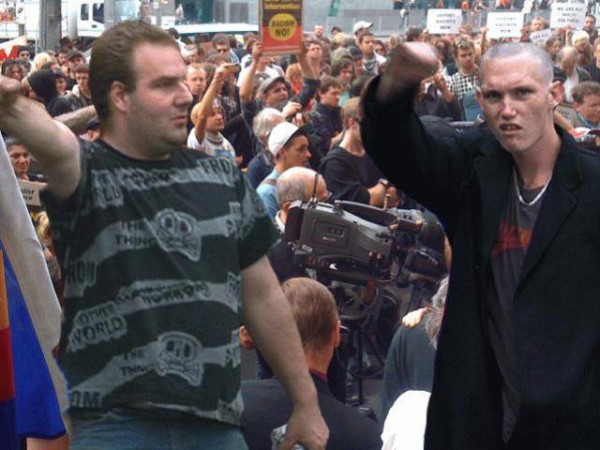 Police today executed a search warrant on the home of Braybrook man Phill Galea. He appeared in court on Thursday afternoon and an application for bail was denied.

Galea has been variously nominated as a member and/or supporter of both Reclaim Australia (RA) and the United Patriots Front (UPF). He himself claims to be an admin on the RA Melbourne page:

In summary, his profile conforms to that of any number of ‘radical, right-wing extremists’.

Of particular interest is Galea’s links to the ‘Patriots Defence League of Australia’ (PDLA), the Bendigo-based group ‘The Victorian Resistance’, and the Melton-based ‘True Blue Crew’ (TBC). His Facebook friends include Damian Kourevellis, ‘President’ of the PDLA Eastern Victoria chapter, neo-Nazi and PDLA/’Right Wing Resistance Australia’ supporter Aaron De Keulenaer, and Julie Kendall of ‘Stop the Mosque in Bendigo’ fame.

The TBC has been very active over the last few weeks promoting the RA rally in Melton on Sunday. Among its members are Zane Chapman and Corey Hadow. Both boys were detained by police on July 18 in Melbourne, and were subsequently fined for being naughty. Their fines were paid for by RA and UPF supporters, which made them both very happy and free to Carry On. Below is an img of the boys throwing bottles at the Street Medics crew on July 18 — the Medics were subsequently pepper-sprayed by police (see : Further notes on #ReclaimAustralia/#UnitedPatriotsFront rallies (July 18/19) (July 23, 2015); Medics’ Statement on July 18 anti-racist/fascist Demonstration, July 18, 2015). 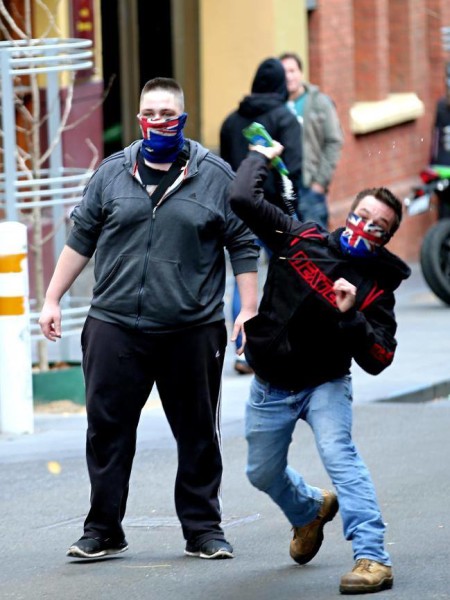 As for Kourevellis, he and a handful of other PDLA members were also present in Melbourne on July 18; his criminal background is outlined in Court told violent man not detained, Steve Butcher, The Age, March 26, 2009. Among those who offered the PDLA and a handful of other neo-Nazis support on the day was Julie Kendall: at one point, local neo-Nazi Glenn Anderson/Androvski, along with other PDLA members, was asked to leave the RA/UPF rally; supposedly Kendall intervened on his and their behalf. 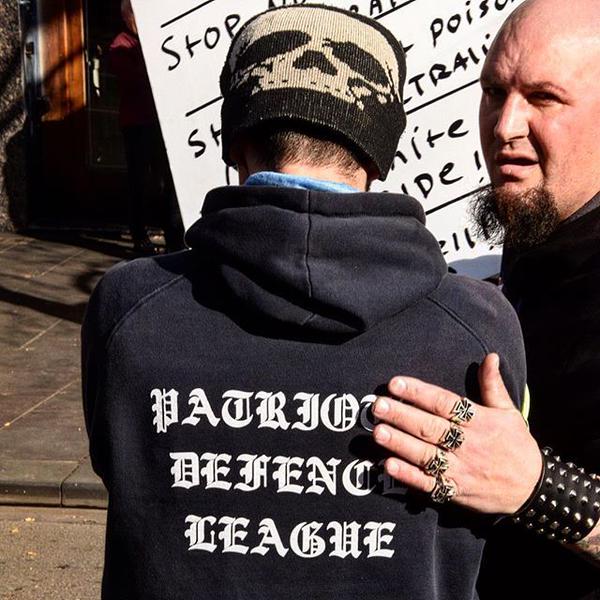 In any event, here’s Kourevellis and Co looking a bit downcast:

As noted, RA has shifted the location of its November 22 anti-Muslim rally from Parliament House to opposite the Melton City Council in Melton. They claim this is because Melton Specialist School had planned to re-locate from Coburns Road (its current location) to the former site of Victoria University’s Melton campus in Rees Road, Melton South, but was forced to abandon the site to make way for the Al Iman College.

This is a lie. Melton Specialist School distances itself from protest rallies, Ami Humpage and Paige Ricci, Melton Leader, November 17, 2015:

Melton Specialist School council president Elle Gillard said the priority for many years had been for a new school to be built on its existing site.

“From what I can remember there were only talks about moving to the VU site. Nothing was set in concrete or stone,’’ Mrs Gillard said.

“We would be better off with a masterplanned school here. That’s our priority.”

The school had not been contacted by Reclaim Australia and Mrs Gillard said it was also unlikely the school would accept any money raised from a barbecue planned at the Melton rally.

“The school is not involved with either of these groups and I’m not happy it has been dragged into something so political,” Mrs Gillard said.

• I dunno why, but but VICE News has republished this interview I done with Nelson Groom back in April 2014.
• Radio National’s Background Briefing has produced an episode titled Anti-muslim extremists: how far will they go? (November 22, 2015).
• SOSBlakAustralia has produced a terrific statement (November 10, 2015) denouncing RA and the UPF and in support of the November 22 rallies against racism, fascism and Islamophobia which you can read here.
• For news and views on anti-fascism in Melbourne, see the Melbourne Antifascist Info Facebook page and blog.

5 Responses to #ReclaimAustralia Goes To #Melton